Accessibility links
African Women and the Struggle Against Poverty The open secret about poverty in Africa is that it has a woman's face, and its newest grim companion is not war, but HIV/AIDS.

African Women and the Struggle Against Poverty

African Women and the Struggle Against Poverty 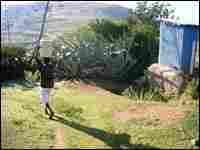 Itumeleng Ntjana, 15, walks miles a day around her village in Lesotho doing chores for the household she heads. It consists of Ntjana and her three younger sisters. Charlayne Hunter-Gault, NPR hide caption 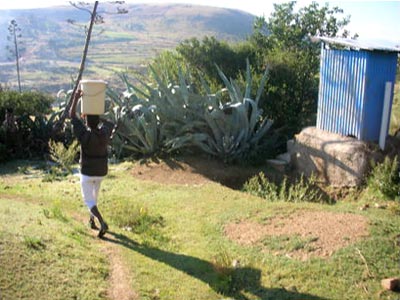 Itumeleng Ntjana, 15, walks miles a day around her village in Lesotho doing chores for the household she heads. It consists of Ntjana and her three younger sisters. 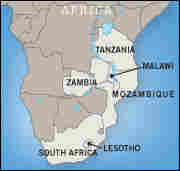 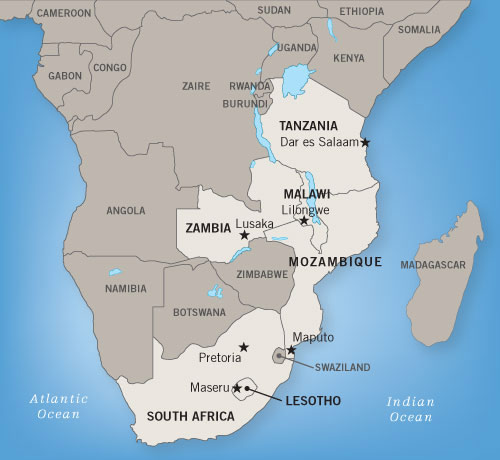 The open secret about poverty in Africa is that it has a woman's face, and its newest grim companion is not war, but HIV/AIDS.

Over several weeks, I traveled around the continent looking at what it would take to make "poverty history" -- or at least to meet some of the United Nations' Millennium Development Goals that would cut poverty in half by 2015. I found both hope and despair.

There's a reason for despair: the chance of a woman dying in childbirth is three times higher in Africa than in industrialized nations. Moreover, one out of every six children in Africa dies before the age of five.

Yet hope comes from medical practitioners and others, such as Lotta Sylwander, UNICEF's country director in Zambia, who insist that, even with limited resources, governments can bring down the rate of maternal and infant mortality by training local birth attendants. Sylwander told me training them could serve a dual purpose: "Skilled birth attendants can be trained in a year to actually do quite a lot... Giving that one-year training to quite a number of unemployed people -- of which there are plenty in this country -- I'm sure can do a lot."

At a district clinic in Manica, about an hour outside Mozambique's capital, health-care workers have been able to save infants by convincing mothers from distant rural areas with potentially difficult pregnancies to come and live in a clinic facility for as long as necessary to ensure a safe birth.

But AIDS is threatening those gains. A growing number of pregnant women are infected. To prevent them from passing the virus to their infants through their breast milk, infected mothers were supplied with infant formula. But women in rural areas often lack access to clean water. And when the formula runs out, the mothers lack the money to travel back to the clinic. So they revert to breastfeeding, which passes along the virus to the infants they've saved.

Some 55 percent or 12.2 million women in sub-Saharan Africa are living with HIV/AIDS. In Lesotho, a tiny mountain kingdom surrounded by South Africa, the HIV prevalence rate among women between 25 five and 29 is more than 56 percent, according to a recent antenatal survey. Hospitals there are buckling under the weight of the large numbers of women suffering the ravaging effects of HIV.

But even as some have made it to the hospital, I found many more either too ill to get there or lacking resources. There is some hope: women of one village who have had access to anti-retroviral medication are thriving. They have banded together to help those who are shut in. But the healthier women are also limited by resources, which prevents them from traveling back into the mountains of Lesotho, even to determine how many are sick or dying. AIDS is threatening the very existence of that country of two million, where more than 300,000 are living with HIV/AIDS.

It is also here that you see the consequences for those not infected but affected by the epidemic. One young woman I met is typical of the growing number of AIDS orphans -- millions of whom have lost one or both parents. In Lesotho, a child who has lost one parent is considered a half orphan. Fifteen-year-old Itumeleng Ntjana is one such child. While girls between 15 and 19 are six times more likely to be infected with HIV than boys, she so far is not infected, though she and her three young sisters have no protection from intruders and are constantly threatened with rape. She became the head of her household when her father died of AIDS complications and her mother abandoned the family.

The spread of AIDS is also complicated by cultural factors. As girls come of age in Zambia, they are subjected to a cleansing ceremony requiring them to have sex with older men called "hyenas" who come in disguise. With the help of UNICEF, some mothers have banded together to stop the practice in at least one village, but it continues elsewhere.

Women in rural areas are hit hardest by poverty. Many are infected with HIV by husbands returning from work in the mines, often hundreds of miles away, where they patronize sex workers or even create second families.

Women must labor not only with this burden, but the burden of being the backbone of the rural economies, farming small plots, selling fruits and vegetables and providing the basic necessities for their families. Still, they have a hard time eking out a living. They often must travel long distances to the markets via dirt roads that are largely impassable, especially during long rainy seasons.

Some experts say hope lies in the kind of example set by Southeast Asian countries, which launched agrarian revolutions that successfully tackled infrastructure problems and created consumers in the rural areas. For that, you need political will.

Meanwhile, there is some hope in projects enabling women to become economically self-sufficient. I visited one money-generating project established by the humanitarian organization CARE. Its Village Savings and Loan Program provides small loans to women entrepreneurs in areas where no other lending institutions exist.

In the remote rural Tanzanian village of Soga, I saw women thriving, operating stands stocked with fruits, vegetables and dried fish, running restaurants and involving themselves in other commercial enterprises. Around the continent, upwards of 400,000 women are benefiting from VS&Ls -- and even more from other forms of micro-lending.

The United Nations hopes to bring the number of girls being educated up to the level of boys by 2015. Malawi has seen some success since free primary education was introduced there about 12 years ago.

But challenges remain. Many girls who complete elementary school can't afford high school, which isn't free. So they drop out because they see no hope of fulfilling their dreams -- of becoming doctors, teachers, school inspectors (inspired, no doubt by Chrissie Kalichero, the one who showed me around), and even presidents.

During my walk through Malawi's tiny Mnjolo village, the little girls kept running up behind us, touching our clothing and giggling. I thought something was wrong, but when I asked, Kalichero, she told me that they were touching us with the hope of being like us. "They see us as powerful women, as role models," she told me with a smile. Then she pointed out that it was only girls and not the boys following us around.

All over the continent, the goal of gender parity in education is lagging, with severe consequences for eradicating poverty. Some blame a lack of political will; others cite resources or a combination of the two.

But the hope lies in the women on the continent who are finding voices for their aspirations, especially through women's movements like the Foundation for African Women's Advancement. And they are bolstered by the emergence of women leaders -- still small in number.

But, like Liberia's new president, Ellen Johnson Sirleaf, the continent's first female elected as head of state, women are determined to make a gender difference in the way they do business. They reject the corruption that has also contributed to Africa's poverty and embrace a culture of human rights aimed at protecting them and their girls. They, too, are hoping for an African renaissance and they want to be a part of it -- an equal part.