Accessibility links
The Missed Education of African Girls Girls remain woefully outnumbered in African schools. They make up nearly 60 percent of the children who should be in school but in fact don't attend. Part of the problem is economic, but much of the reason remains rooted in societies that undervalue girls and, in some cases, abuse them. These problems are prevalent in Malawi, but there's some progress as well.

Girls remain woefully outnumbered in African schools. They make up nearly 60 percent of the children who should be in school but in fact don't attend. Part of the problem is economic, but much of the reason remains rooted in societies that undervalue girls and, in some cases, abuse them. These problems are prevalent in Malawi, but there's some progress as well. 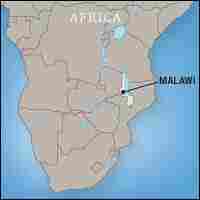 The government of Malawi introduced free primary education some 12 years ago, becoming one of the first African countries to do so. Doug Beach for NPR hide caption 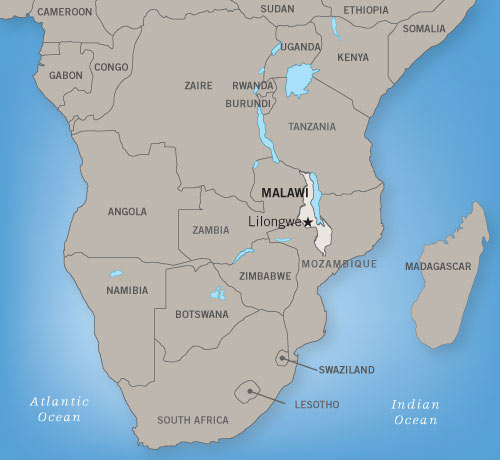 The government of Malawi introduced free primary education some 12 years ago, becoming one of the first African countries to do so.

For today's installment of our series, Portraits of Poverty, NPR's Charlayne Hunter-Gault reports from Malawi in southern Africa.

Morning classes at Enjolo(ph) Primary School in Enjolo Village, Malawi, a 30 minute ride outside the capital, Lilongwe. An equal number of boys and girls learning together. In some respects, a model school on the African continent, where close to 60 percent of children out of school are girls. UNICEF's Aida Girma.

HUNTER-GAULT: Women are considered inferior to men in many parts of Africa and this is expressed in a variety of ways. Women feed men first and give them the best food. They often get the most menial jobs and men are always first.

Enjolo Primary School is located in a poor rural village about 30 minutes outside of Lilongwe. Pupils sit among village cows during class breaks. Despite the government's commitment to education, it still lacks resources. Thanks to UNICEF, this school has two concrete classroom buildings and some desks.

There's still not enough for the more than 1000 students. Some classes of as many as 100 students are conducted under a big tree near the school buildings. Nelson Kaperemera is Malawi's director of basic education.

Mr. NELSON KAPEREMERA (Director Basic Education, Malawi): We still have some communities where the value of education for girls is still being doubted, because in the past they were valuing sending boys to school. But I think that is now changing. There's been a lot of social mobilization campaign to try and increase girls' access to education.

HUNTER-GAULT: Those campaigns, coupled with the government of Malawi's decision to introduce free primary education some 12 years ago, one of the first to do so on the African continent, have resulted in over 90 percent enrollment for both boys and girls.

But issues still remain, in particular those having to do with sexual safety and exploitation. School inspector Chrissy Calacharo(ph) says that in many schools in Malawi, there's a problem of male teachers taking sexual advantage of their female students by forcing them to have sexual intercourse or touching them.

Ms. CHRISSY CALACHARO (School inspector, Malawi): The abuse of girls by some teachers is happening at the schools, and sometimes the teachers, if they are not the actual sexual intercourse, but they like touching, touching (unintelligible). Some girls, especially when they reach ages of 15 or 14, they drop out of school.

HUNTER-GAULT: Enjolo has provided separate toilets for boys and girls. But at a nearby school, we are shown what Calacharo says is the norm, a small cluster of putrid open-pit latrines made of mud bricks worn to mere shells by rain and lack of repair.

We watch as boys go in and out freely.

(Soundbite of children playing and cheering)

HUNTER-GAULT: But 13 year old Alice Maseko(ph) says she and many girls are concerned about being sexually assaulted in the latrines.

Ms. CALACHARO: She says she fears, because there are no doors there, therefore the boys can see them.

HUNTER-GAULT: Addressing such challenges has been done in part by the mothers group, organized with the help of UNICEF.

Jamalese Sedekhani(ph), a mother of six girls, was one of about a dozen members of the mothers group gathered in the schoolyard. She says the group has helped keep girls at school in several ways. Unwanted pregnancies due to sexual violence continue to be a problem, but the mothers have convinced some of the girls to come back after they've had their babies.

But she and other women appear to be proudest of stopping a cultural practice in Enjolo which they say was not only resulting in pregnancies but was also spreading HIV-AIDS - girls' coming of age initiation rights. Thea Melosi(ph), a mother of four girls, described what she called the dangerous cultural practice.

Ms. THEA MELOSI (Mother): (Through translator) The custom was that when the girl was initiated, she was then forced to do sex with a grown up person so that the girl would be cleansed.

HUNTER-GAULT: In the rite, the older man is called the fesi(ph), or hyena, because he's in disguise.

Esther Ensoya(ph), who works with village women like these through her organization The Forum for African Women Educationalists, says that girls can be as young as 8 or 10 when they're forced to have sex with these hyenas.

Ms. ESTHER ENSOYA (Forum for African Women Educationalists): Now, we're seeing this is an old man in his 40s and 50s cleansing a 10 year old girl. So we see in the advent of AIDS, you know, the girl has also her own right. Privacy.

HUNTER-GAULT: The women said they held talks with the local chief in an effort to stop the practice. They were successful. UNICEF's Christine Chiwe(ph).

Ms. CHRISTINE CHIWE (UNICEF): Interestingly enough, they were able to identify the positive as well as the negative.

HUNTER-GAULT: Topping the negative, the spread of HIV-AIDS.

Later, we visited Chief Enjoli(ph) in his compound of mud and thatch houses and lots of little children. I asked him if he had participated in the cleansing ceremonies in the past.

Chief Enjoli acknowledged that he had, but he also said he'd been chosen by his fellow chiefs to come up with an alternative to the sexual practice.

Chief ENJOLI: (Unintelligible) So we stopped everything.

HUNTER-GAULT: The young girls now complete their coming of age here by downing a glass of herbs. But elsewhere in Malawi and throughout the continent, such rituals continue.

The inability to educate all children also has deep roots in poverty. Malawi has suffered from recurring droughts and some of the worst food crises on the continent. This, combined with years of government corruption and overspending, has put Malawi on an economic knife's edge.

HUNTER-GAULT: The International Monetary Fund's Thomas Boundsgard credits the government with reigning in corruption, but says it's still heavily dependent on donor aid. 40 percent of the country's budget depends on external aid and some 80 percent of its development programs do as well.

Mr. BOUNDSGUARD: I think the real challenge for the (unintelligible) is to move beyond having a beautiful plan, to actually getting into the nitty gritty of implementing policies and really make a difference in the life of the poor.

HUNTER-GAULT: Back at Enjolo Primary, 18-year-old Felicia Lundy(ph), an eighth grader, typifies the problem Malawi and other countries face. Many children cannot afford to go onto high school because it isn't free. Lundy has been offered proposals by older men and boys, but she doesn't want to end up like so many girls in her village. She dreams of becoming a doctor. But her father is dead, her mother severely handicapped.

Unidentified Woman: She says if she cannot find anyone to pay for her school fees she will just leave school. She will just drop.

(Soundbite of children in class)

HUNTER-GAULT: And keeping them in school is the biggest challenge facing countries like Malawi.

BLOCK: Charlayne Hunter-Gault's series continues tomorrow on MORNING EDITION. She'll report on efforts to help mothers and children survive childbirth. And you can find her previous stories and read an essay about her experiences reporting on poverty in Africa. That's at NPR.org.