Accessibility links
Stone's Sept. 11 Movie Is Forced and Unconvincing Oliver Stone's movie World Trade Center feels like an attempt to craft a feel-good movie out of a ghastly situation. That makes the film unconvincing. Reviewed by Kenneth Turan.

Oliver Stone's movie World Trade Center feels like an attempt to craft a feel-good movie out of a ghastly situation. That makes the film unconvincing. Reviewed by Kenneth Turan. 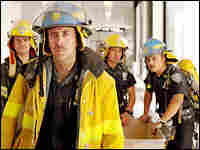 And the fictionalized events of September 11th reached a wide audience earlier this year with British director Paul Greengrass's United 93. That film had a relatively small budget and no name stars.

KENNETH TURAN: It's taken the Hollywood system five years to come up with a major motion picture about the attacks on the World Trade Center on September 11, 2001. But if you think that time was used for thoughtful introspection, you just don't know Hollywood.

It seems that the powers that be spent that time squeezing the story of 9/11 into their sentimental formula. The problem, however, is not that World Trade Center is an attempt to craft a feel-good movie out of a ghastly situation, it's that the result is forced, manufactured and largely, but not entirely unconvincing.

STEPHEN DORFF: (As Scott Strauss) My wife is Pat Strauss. Tell her and my kids that I love them.

TURAN: The reality of what took place at the World Trade Center is such an overwhelmingly sad and troubling story, that simply recreating those horrific events insures that your work will have moments of power. Because those events are guaranteed to spark feelings, we hold depictions of them to a higher standard. We don't want this story, of all stories, to devolve into a simplistic film full of uplifting messages about bringing out the goodness we forgot could exist. But that is just what we get.

Unidentified Man #5: With you, Sarge.

CAGE: (As Sergeant John McLoughlin) All right. All right, we got a team.

TURAN: You would not expect Oliver Stone, the iconoclastic director of JFK, Natural Born Killers, and Salvador to be assuming the standard Hollywood position. That speaks sad volumes about the grinding effects of decades spent confronting the studio system.

The problem with World Trade Center is not just that Stone has gone all sincere on us, but that he's just no good at it. The film often feels like it was lifted - a scene here, a scene there - from a notebook of standard movie situations.

World Trade Center's insistence on up-close and personal heroics puts it at the opposite end of the spectrum from Paul Greengrass's austere United 93. If that film had too little overt emotion, this one has too much. It's too bad it wasn't Greengrass who directed this script. That might've been the 9/11 film audiences deserve.