Accessibility links
Caring for Kids at the End of Life The pediatric advanced care team at Children's Hospital of Philadelphia takes care of children who are dying. Such programs recognize that adding time to a patient's life -- and more treatment -- may not be as important as adding quality to that life.

Listen
Caring for Kids at the End of Life 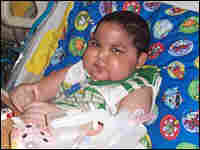 Marcellius "Celli" Sears, 7, is cared for by the pediatric palliative care team at Children's Hospital of Philadelphia, where he is awaiting a lung transplant. His swollen cheeks are a side effect of steroids that are a part of his medical treatment. Lisa Ortega-Sears hide caption

Part 2 of the Series 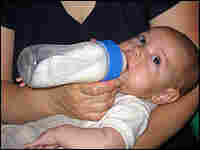 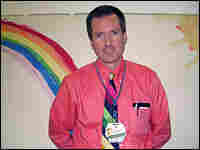 Pediatrician Chris Feudtner helped found the palliative care team at Children's Hospital of Philadelphia. He wrote an essay for Penn Arts & Sciences Magazine in which he wonders how he'll explain his work to his young sons: Andrea Hsu, NPR hide caption

Someday I suspect you'll ask me what I do. You'll ask, "What is pediatric palliative care?" I wonder what I'll say, whether I'll try to explain the important yet difficult truths of this job or simply recollect the encounters of that day.

This morning, for instance, having gently knocked, I step into a patient room and close the door, leaving behind the hospital hubbub. The mother sits on a blue sofa by the window at the far end of the room, her baby in her arms, wrapped in a white blanket. Standing next to her is her own mother, hands on her daughter's shoulders. I approach, passing the empty crib, the tray of medical supplies, the silent monitors, and I sit at the edge of the sofa. Midmorning sunlight cascades through the window, enveloping us. The mother looks at me, tears on her checks. We say nothing. Then, after a while, she says, "It happened so peaceful. I never knew someone could die so peacefully."

Walk into the lobby of Children's Hospital of Philadelphia, and you'll notice it doesn't feel like a hospital -- or sound like one: Balls bounce and bang inside an audio kinetic sculpture, while mobiles of stars and planets float overhead.

Upstairs, the conversation at the weekly meeting of the hospital's pediatric advanced care team, or PACT, brings you quickly down to earth.

PACT is a less threatening version of other language: palliative care, or end-of-life care. In other words, the team members help take care of children who are dying.

The palliative care team might mediate with the primary doctors on a case, urging them to give parents more time to think through treatment options. The team might advocate for a child to be allowed to go home, even if it means stopping treatment.

Tensions exist with other doctors in the hospital who would never admit they can't fix a child. Those doctors consider palliative care tantamount to quitting.

This represents a huge change in culture. It recognizes that adding time to life may not be as important as adding quality, and that a full-press focus on more treatment and procedures may not be what a family wants.

Chris Feudtner is one of the doctors who started this palliative care team.

"I think it is still, for many people, unimaginable to talk about a child dying," he says.

Feudtner says part of the team's job is to create a space where it's safe to think about that possibility and to explore what it would mean if doctors didn't "do everything" to keep the child alive.

The pediatric intensive-care unit has 45 beds. The patients might be children with advanced cancer, severe metabolic disorders, or chronic lung, kidney or liver conditions.

For the last three months, one of these rooms has been home to 7-year-old Marcellius Sears, known as Celli. He will die if he doesn't receive a lung transplant.

His mother, Lisa Ortega-Sears, has moved to Philadelphia from Michigan to be with Celli as he waits for a new set of lungs.

She says figuring out the best treatment for Celli has meant trying to set aside her own needs as his mother to make sure, as she puts it, that she's not being selfish.

"You can do what you want for your child just to prolong their life and send them through so much. And if they don't want it, it's not for their benefit; it's for yours," she says.

Pediatric oncologist Tammy Kang also helped start Children's Hospital of Philadelphia's palliative care program. She says it's sometimes painful for her to hear the slogans about "beating" and "fighting" cancer, as if it's a "winnable situation."

"I think of all the patients, that as a palliative care team we take care of, who feel like they're losing or that they're giving up or somehow society has stigma on them for not 'fighting to the bitter end.'"

The true reality, Chris Feudtner says, is that "we're not in ultimate control."

"What we're trying to do is make sure that all of our choices are really consistent with our deepest desires for what's best for the kid, given what they're up against, and then we do the best we possibly can."