President Bush says foiled plot is a reminder that the nation is at war with 'Islamic fascists.' 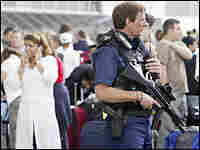 A policeman secures the area as passengers wait at London's Heathrow airport on Thursday after the announcement of a foiled terrorist plot. Shaun Curry/AFP/Getty Images hide caption 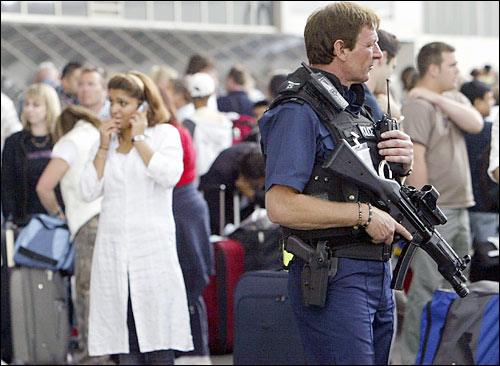 A policeman secures the area as passengers wait at London's Heathrow airport on Thursday after the announcement of a foiled terrorist plot.

There are approximately 106 flights per day between the United Kingdom and the United States. The Department of Homeland Security is taking a number of heightened protective measures to ensure the continued safety and security of international and domestic air travel.

No liquids or gels of any kind will be permitted in carry-on baggage. Items must be in checked baggage.

The Federal Air Marshals Service (FAMS) will provide expanded mission coverage for flights from the United Kingdom to the United States.

Travelers can assist security agencies by: 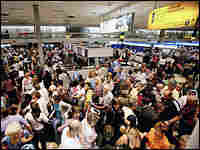 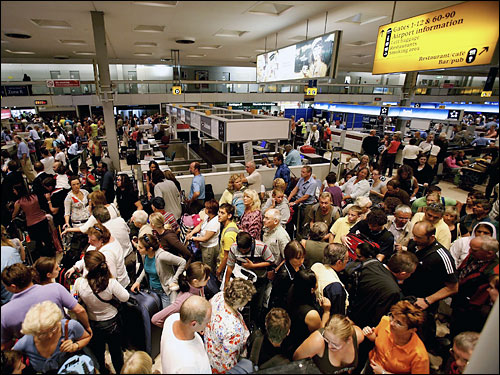 British officials announced Thursday that they had foiled an advanced plot to blow up airliners headed to the United States with liquid explosives hidden in carry-on bags. The news prompted heightened security efforts in the United States and Britain, and long lines and delays at airports in both countries.

One U.S. official told NPR that the suicide attackers planned to use a peroxide-based solution that could ignite when sparked by something as simple as a camera flash or other portable electronic device. And according to reports in the Associated Press, U.S. intelligence officials say the terrorist plotters hoped to stage a dry run of the attack within two days and follow up with the real thing a couple of days later.

President Bush called the thwarted plot a stark reminder that the nation is at war with "Islamic fascists who will use any means to destroy those of us that love freedom." Bush spoke briefly from Wisconsin, where he had traveled to give a previously scheduled speech on the economy.

The president thanked British Prime Minister Tony Blair and British security agencies for stopping a terrorist plot that officials have described as being in the final planning stages. President Bush said the United States is "safer than it was prior to 9/11" but added that "it is a mistake to believe there is no threat to the United States of America."

A Plot to Commit 'Mass Murder'

British officials believe the plot centered around liquid explosives that were to be assembled and detonated on nine or 10 planes bound for the United States from London's Heathrow airport.

Both U.S. and U.K. officials say the plot has many of the hallmarks of an al-Qaida operation: the use of timed explosive devices and planes, sophisticated planning, an operation with international scope.

"We believe that the terrorists' aim was to smuggle explosives onto airplanes in hand luggage and to detonate these in-flight," Stephenson said. "This was intended to be mass murder on an unimaginable scale."

A U.S. intelligence official told the Associated Press that the plotters had hoped to target flights from England to major airports in New York, Washington and California.

Stephenson said that some two-dozen people had been arrested overnight in what he called the culmination of a months-long, unprecedented surveillance operation. He said British investigators had been tracking numbers of people on suspicions of terrorist plotting.

Stephenson said the operation came to a head Wednesday night. London Metropolitan Police officials said 24 people were arrested in raids just outside London and in the central British city of Birmingham.

British authorities have released few details about the people in custody, but they say the primary planners and leaders of the operation are among them.

While President Bush warned of "Islamic fascism" in his remarks on Thursday, British officials are being very careful not to mention any ties to a specific religion or community. Bush administration officials have said that most were Muslims of Pakistani descent.

Meanwhile, French Interior Minister Nicolas Sarkozy said French security services were working closely with their U.K. counterparts, and that the suspects "appear to be of Pakistani origin."

British officials say this is just the first stage of what will be an ongoing investigation, and the possibility remains that some suspects or other terrorist cells with links to the plot could still be at large.

U.S. Homeland Security Chief Michael Chertoff early Thursday confirmed that the plot involved some kind of liquid explosive material that was to be disguised as beverages and other common products and then set off with detonators disguised as electronic devices.

Liquid explosives are easy to make, and the material easy to come by. They can be made from simple household items, such as nail polish remover and hair bleach (acetone and hydrogen peroxide). The most familiar liquid-explosive material is nitroglycerine, which can cause a great deal of damage in small amounts. Once smuggled onto a plane, the material could be detonated with small amounts of electricity, heat, friction or even light.

Scientists are working on technologies to detect liquid explosives, but to date, they are not in use in airports.

In the United Kingdom, mobs of stranded passengers have begun to thin out, but people are still struggling to repack checked luggage after security officials banned all carry-on bags.

Travelers delayed at London's Heathrow airport Thursday morning told NPR that they were willing to endure the inconvenience if it meant making them and other passengers safer.

Heathrow -- which normally sees 1,250 departures and arrivals and 200,000 passengers a day -- was closed to arriving European flights. The travel chaos rippled across Europe as many airlines, including Air France, Alitalia, Lufthansa, Iberia and Aer Lingus canceled flights to Heathrow.

Heathrow airport officials say they hope to resume normal service on Friday, but add that security restrictions will remain in force for the foreseeable future.

In the United States, passengers at airports around the country are repacking their own bags, trying to get rid of any unnecessary liquid items. A warning on the Web site for the Transportation Security Administration reads: "No liquids or gels of any kind will be permitted in carry-on baggage. Items must be in checked baggage. This includes all beverages, shampoo, suntan lotion, creams, tooth paste, hair gel, and other items of similar consistency."

Exceptions will be made for baby formula, breast milk or juice if a baby or small child is traveling; prescription medicine with a name that matches the passenger's ticket; and insulin and essential other non-prescriptions.

Kip Hawley, assistant secretary for the TSA, warned U.S. passengers to adhere to the restrictions.

"Declutter your bag," Hawley said. "If you let the TSOs have a clear view of what's in the bag with their X-ray, you'll move right on through. That is something very easy to do as you pack your bag. Leave the liquids at home. Drink them. Declutter your bag."

Passengers unloaded everything from sunscreen and cosmetics to water bottles and bottles of wine in accordance with the new rules. Most travelers took the delays and inconvenience in stride, saying that they understood the need to bolster security in the wake of the heightened threat.

Both the United States and Britain have raised security alerts on aviation to the highest levels. There are some flights departing from Britain's Heathrow airport, but most have been delayed or cancelled, affecting hundreds of thousands of airline passengers.

In the United States, the aviation security level was raised to "red" or severe for the first time. National Guard troops have been ordered to deploy at Boston's Logan airport and at airports around California. And U.S. air marshals have been sent to Britain to help with intensified security operations.

Despite the high-security precautions, Homeland Security officials say there is no indication that any of the plotting took place inside the United States and that U.S. air space is safe. It's not clear at this point how long the added security measures will stay in place.

Shares of airlines and travel companies dropped sharply Thursday as a result of the alleged terrorist plot. Industry experts say long delays at European and U.S. airports could deal a severe blow to the aviation industry.

The plot had targeted airlines with direct flights from England to the United States. At a press briefing Thursday afternoon, Homeland Security officials said that three airlines -- United, American and Continental -- have been mentioned as possible targets only because they offer such direct flights, and not because of any evidence of a specific threat against them. Shares of those three airlines took a hit in early trading Thursday but recovered some ground by late morning.

The news sent European stocks down across the board, and major European airline shares were down about 4 percent. Analysts say the biggest financial impact on airlines in the short term will be the cost of delayed and cancelled flights. In the long term, the costs will come in the form of tighter and more expensive security systems, analysts say.

There's been uncertainty in U.S. markets, but overall, they have been stable. Experts say if there's any good financial news, it's that oil prices are down -- as much as 2 percent. Analysts say the threat illustrated Thursday could mean fewer people will travel by air, which would lessen the need for fuel.

With additional reporting by Deborah Amos in London and Nell Boyce and Jon Hamilton in Washington, D.C.