Accessibility links
The Science of Detecting Liquid Explosives There are a number of problems to be solved before liquid explosives can be easily and reliably detected at security check points. For now, the best detecting method is a human search by hand.

There are a number of problems to be solved before liquid explosives can be easily and reliably detected at security check points. For now, the best detecting method is a human search by hand.

That's right. The security agencies currently have no test to check for liquid explosives. Historically, you know, technology tends to focus on threats that people have seen in the past, so you know, in early - problems would be knives and guns, and so, you know, the focus was on developing X-ray technology and things that could find those types of materials.

MONTAGNE: So what sort of things are companies looking to do in regards to detecting liquid explosives?

BOYCE: Well, they are trying a lot of things, and there's a real push for this now. I mean, I think anyone who's been through an airport security line has maybe had a cup of coffee or something like that, and they're asked to take a sip of it, and that's hardly the kind of high-tech detection device that airports would like to have.

One thing that's being tested is something called dielectric measurements. Basically, it could look through a bottle, a glass bottle, and could tell you if it was something like a water-based material like, you know, say you're bringing glass of - sorry, a bottle of wine to relatives. And if it was water-based, it wouldn't be as much of a problem if the sensor detected that the container had a petroleum-based or something like that - something that might be a solvent for an explosive.

The problem with that kind of technology is that it can't really look through metal containers. So say you were bringing an aerosol can, something like hairspray. But there are other technologies, technologies that have been previously in laboratories, that can sample a liquid and analyze its chemical structure and then compare that to a database of chemicals that might be of concern.

MONTAGNE: And then what are some of the obstacles to get these things working and also probably efficient, when you're talking about millions of people being screened in airports?

BOYCE: That's just right. I mean, scientists have technologies to analyze liquids. I mean, that's very common. It goes on in laboratories all the time. But that's very different than a device that you can put there in an airport, have it going very quickly, have it be something that people can operate with very little training. And it's especially problematic, you know, when you're looking for chemicals that are also used as common household chemicals.

So, you know, the technology development is in the works, but it hasn't been seen as much of a priority until recently.

MONTAGNE: Nell, thanks very much.

The alleged plot to blow up airliners over the Atlantic involved the use of liquid explosives, according to officials in the United Kingdom and the United States. Authorities suggest that the plotters planned to carry explosive ingredients aboard the aircraft in hand luggage -- perhaps in cosmetics containers or beverage bottles -- and detonate them. Here, a primer on liquid explosives.

How do liquid explosives work?

This type of explosive is simply a chemical compound that in liquid form is relatively unstable. A physical, chemical, or electrical jolt causes it to explode, usually producing a fair amount of heat, light and a destructive shock wave (a very rapid change in air or water pressure). Like solid explosives, liquid explosives vary in power, depending on their recipe and how they are packed into a container.

Why would terrorists want to use liquid explosives?

Security screeners have gotten much better at detecting solid explosives, while liquid explosives have proven much harder to detect. In addition, liquid explosives can be made from fairly common ingredients, including substances typically found in your garage or under your sink. Finally, a terrorist could assemble an explosive from components carried aboard a plane in separate containers or by different people -- making it even harder for screeners to spot. One person could carry ingredient A on to the plane, another ingredient B, and then they could be combined.

Do liquid explosives have disadvantages?

Like many homemade explosives, they can be very volatile. Some can be set off by a stray spark, a change in temperature, exposure to sunlight, or even an accidental bump. For instance, the liquid nitroglycerin -- made famous by Alfred Nobel, the inventor of dynamite and father of the Nobel Prize -- is notoriously unstable. It can be set off by an accidental jolt. In fact, Nobel's brother died when a dynamite factory exploded. That's why the invention of more stable explosives, like sticks of TNT, was important. TNT typically needs to be ignited with a powerful blasting cap; it can even be melted safely.

Terrorists have tried several times in the past to blow up airliners with liquid explosives...

The U.S. government has focused on the threat of liquid explosives since at least 1995. That's when they learned about a plot in the Philippines to plant bombs on 11 airliners bound for the United States. The plotters apparently wanted to use liquid nitroglycerin. They planned to smuggle it aboard in bottles made for contact lens solution. But the plan came apart when there was a fire in the apartment where the bombs were being made. (A test run for that plot, a plane bound for Tokyo, resulted in the detonation of a liquid explosive in-air. One person was killed, and pilots were able to land the plane.)

Experts believe that terrorists have since moved on to use the type of explosives previously described, where the components are carried separately and then mixed at the site, to reduce their instability.

How hard is it to screen for liquid explosives?

They're a real threat to airlines. Currently security agencies have no test for liquid explosives. Technology is in the works, and several devices have been tested in airports. One kind uses microwaves to distinguish safe, water-based liquids (like coffee or soda) from solvents and other dangerous chemicals used in explosives. But this device can’t see through metal containers. Another kind of device sends laser light through clear glass or plastic. The light bounces back with a scatter signature that can be compared to a database of worrisome liquids. But this technology can’t see through opaque containers.

Why aren't some of these devices already installed in airports?

Experts have known for years that screening liquids is a weak spot in airport security, but other needs have taken priority. For example, one government report said that research and development was recently delayed when the Transportation Security Administration had to transfer funds away from R&D to other expenses, like personnel costs for screeners.

With reporting by NPR's Nell Boyce and Jon Hamilton. 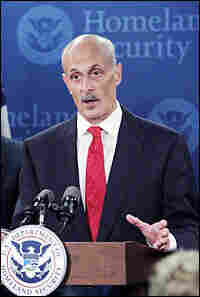 Thursday morning, Homeland Security Secretary Michael Chertoff briefed the media about a suspected British terror plot, in which 21 suspects have been arrested in Great Britain. Some of the main points in Secretary Chertoff's remarks:

• The plot's operatives planned to bring liquid explosives and detonators, disguised as beverages, electronic devices or other common objects, on board flights to the United States.

• There is currently no indication of any plotting within the United States.

• The threat level for commercial flights from Britain to the United States is at red, or severe, the highest level of alert.

• The threat level for all other domestic and international flights in the United States is raised to orange, or high alert.

• Any liquids or gels have to be checked as part of baggage to go into the hold. There will be exceptions for baby formula and medicines

• Travelers are asked to pack as lightly as possible and minimize clutter to help speed the security screening process.

• Federal air marshals are being sent to the United Kingdom to provide expanded mission coverage for flights to the United States.

• In international arrival areas, U.S. customs officials will increase the use of advanced targeting tools, as well as baggage and aircraft search teams using K-9 units and detection technology.

• Travelers should expect delays, but they do not need to change their travel plans.

• Homeland Security asks Americans to be aware and vigilant, and to report any activity they think is suspicious to law-enforcement authorities.