Accessibility links
Bush Responds to Airline Bombing Plot President Bush made a brief statement about the airline-bombing plot Thursday during a stop at Austin Straubel International Airport in Green Bay, Wisc. A transcript is provided by Federal News Service: 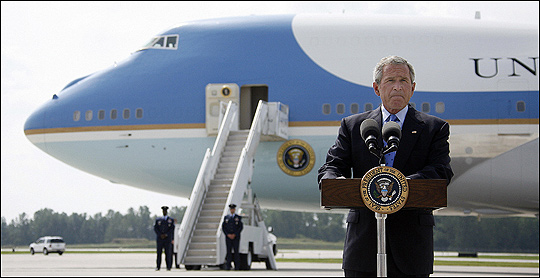 President Bush speaks to the media at the airport in Green Bay, Wisc.

President Bush made a brief statement about the airline-bombing plot Thursday during a stop at Austin Straubel International Airport in Green Bay, Wisc. A transcript is provided by Federal News Service:

PRESIDENT BUSH: The recent arrests that our fellow citizens are now learning about are a stark reminder that this nation is at war with Islamic fascists who will use any means to -- to destroy those of us who love freedom, to hurt our nation.

I want to thank the government of Tony Blair and officials in the United Kingdom for their good work in busting this plot. I thank the officials in Washington, D.C., and around our country who gather intelligence and who work to protect the American people. The cooperation on this -- on this venture was excellent. Cooperation between U.K. and U.S. authorities and officials was solid, and the cooperation amongst agencies within our government was excellent.

The -- this country is safer than it was prior to 9/11. We've taken a lot of measures to protect the American people. But obviously we're still not completely safe, because there are people that still plot and people who want to harm us for what we believe in. It is a mistake to believe there is no threat to the United States of America.

And that is why we have given our officials the tools they need to protect our people.

It -- travelers are going to be inconvenienced as a result of the steps we've taken. I urge their patience and ask them to be vigilant. The inconveniences occurs because we will take the steps necessary to protect the American people.

Again, I appreciate the close cooperation between our government and the government of the United Kingdom. The American people need to know we live in a dangerous world, but our government will do everything we can to protect our people from those dangers.