Accessibility links
Origins of Exhibited Cadavers Questioned For two years now, exhibitions of human cadavers have been traveling the country, shown in science museums and other spaces. The shows have been dogged by criticism... and one delicate ethical concern. 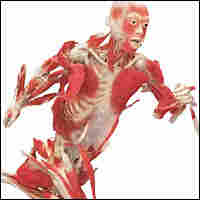 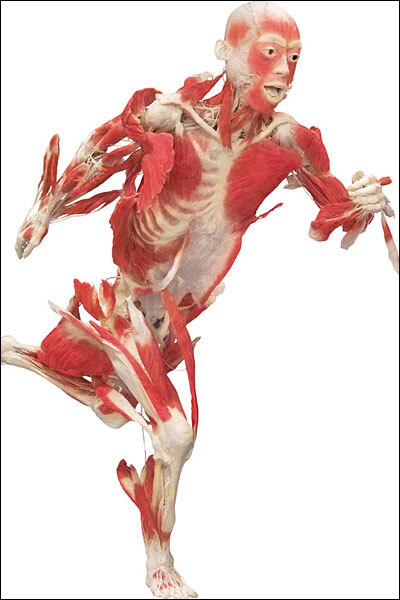 A skeletal muscle display from BODIES... The Exhibition, in a running pose

Courtesy of BODIES... The Exhibition

Part One of This Report

For two years now, exhibitions of human cadavers have been traveling the country, shown in science museums and other spaces. The shows, featuring corpses that have been preserved and solidified through a process called plastination, have been wildly successful. But they also have been dogged by criticism.

One delicate ethical concern stands out above all the others: whether the bodies were legitimately obtained. Dr. Gunther von Hagens, the inventor of plastination and the impresario behind the Body Worlds exhibitions, says that every whole body exhibited in North America comes from fully informed European and American donors, who gave permission, in writing, for their bodies to be displayed. The science museums that have hosted Body Worlds also make this assurance.

"What I certainly never use for public exhibitions are unclaimed bodies, prisoners, bodies from mental institutions and executed prisoners," von Hagens says.

Chinese medical schools supply von Hagens with unclaimed bodies, which he plastinates and sells to universities. Von Hagens used to take cadavers from the former Soviet Union, but he stopped after body-trafficking scandals in Russia and the Kyrgyz Republic.

Five years ago, customs officers intercepted 56 bodies and hundreds of brain samples sent from the Novosibirsk Medical Academy to von Hagens' lab in Heidelberg, Germany. The cadavers were traced to a Russian medical examiner who was convicted last year of illegally selling the bodies of homeless people, prisoners and indigent hospital patients.

Von Hagens was not charged with any wrongdoing, and says his cadavers are obtained only through proper legal and ethical channels.

Still, NPR has learned there's no clear paper trail from willing donors to exhibited bodies. People donating their bodies to von Hagens send consent forms to his Institute for Plastination. They pay to have their bodies transported to a plastination facility. There, their donor forms and death certificates are checked.

That paperwork is then separated from the bodies, which can be used for displays or sold in pieces to medical schools. No one will know for sure, because each plastinated corpse is made anonymous to protect its privacy.

Hans Martin Sass, a philosophy professor with a speciality in ethics, was hired by the California Science Center to investigate Body Worlds before the show's U.S. debut in 2004. He matched over 200 donation forms to death certificates, but he did not match the paperwork to specific bodies von Hagens has on display.

Roy Glover, spokesman for BODIES... The Exhibition, says its cadavers -- all from China -- did not come from willing donors.

"They're unclaimed," Glover says. "We don't hide from it, we address it right up front."

For that reason, many venues will not display BODIES... The Exhibition. Groups such as the Laogai Research Foundation, which documents human rights abuse in China, have charged that the category of unclaimed bodies in China includes executed political prisoners.

When BODIES... The Exhibition opened first in Tampa, Fla., last summer, the state anatomical board requested documentation proving the corpses were ethically obtained. Dr. Lynn Romrell, who chairs the board, says it got only a letter from the show's Chinese plastinator asserting that they were.

"He stated that none of the material came from criminal institutions or homes from the mentally insane. But just his word on that, no documents," Romrell says.

Romrell wanted to close the exhibition down, but says the state anatomical board lacked the authority.

The owner of Body Worlds says each body he displays can be accounted for, but he is unwilling to make public a complete paper trail. His competition, BODIES... The Exhibition, relies on documentation from a country with a problematic human rights record. Even at best, its exhibitors say the bodies were not formally donated by people who agreed to be displayed.

Despite questions about the two exhibitions, both continue to draw hundreds of thousands of visitors around the country, and some museums are even thinking about adding plastinates to their permanent collections.

Plumbing the Murky (and Crowded) World of Cadaver Displays

I attended the Body Worlds show at Philadelphia's Franklin Institute last February on the advice of a doctor friend. "They're the most incredible dissections I've ever seen," she said. Body Worlds is one example of a new exhibition phenomenon: shows of actual human corpses preserved through a process called "plastination" with tickets selling for around $25. The shows -- and the process -- were originally created by Dr. Gunther von Hagens, a German anatomist, who caused a sensation with the exhibitions in Europe and Asia before bringing them to the United States.

What amazed me were not the plastinates alone, incredible though they were. I was astonished that a good four months after the opening, I was unable to buy tickets. The show was sold out for nearly the entire weekend. I had to stay until late Sunday to attend the show. And although the museum made a point of staggering visitors' entries, putatively to ensure a quiet atmosphere, I found myself in a mob scene. I couldn't even get close to many of the plastic cases displaying human organs. Some of the plastinates were impossible to see, thanks to the tight knots of grown-ups, kids and baby carriages around them.

I emerged from the exhibition, ears ringing from the noise of the crowd. Signs at the exhibition's entrance stated that the bodies had been voluntarily donated under the auspices of the Institute for Plastination. Well, what was that? Looking into the shows, I learned the IFP was another arm of Dr. von Hagens' buisness empire. In other words, Dr. von Hagens was basically tasked with ensuring that Dr. von Hagens' exhibition was ethical and legitimate.

That's how this NPR series began. I learned that the Franklin Institute and similar science centers around North America that have hosted Body Worlds relied on research commissioned by the California Science Center when it first brought the show to the United States in 2004. (This was done by Hans-Martin Sass, who appears in my story.) That research verified that there is a pool of some two hundred death certificates that matched donor forms. But as I looked into the story, I found that no independent observer has matched those documents to the bodies on display. That means there is no clear paper trail from a deceased donor to a finished plastinate.

Dr. von Hagens also plastinates and sells many hundreds of unclaimed bodies obtained from Chinese medical schools for educational purposes. He says that he obtains them all only through trusted sources, but no outsider has verified that they might not be, in a worst-case scenario, dissidents killed in a Chinese prison, then sold through a body broker to a medical school, and then displayed to the public. Nor has an independent observer ensured that the unclaimed Chinese bodies von Hagens uses in his medical-school-supply business are not turning up on display in the Body Worlds shows. Again, von Hagens categorically declares that he obtains his cadavers ethically; the point here is that the U.S. science centers who have put the bodies on display have conveyed the impression that an independent verification of this has been made.

Besides the original ethical review, the science centers involved have also reassured patrons that they've turned to "ethics panels" or "advisory boards" of local clerics and academics to ensure that the bodies displayed have spotless ethical pedigrees. But after I interviewed scores of people at various science musuems, it became clear those boards hadn't been asked to seriously engage with the shows' ethical pitfalls. Instead, the board members were more or less charged with marketing the shows to their respective communities.

Body Worlds has been shown at science centers in Chicago, Cleveland, Los Angeles and Denver -- and it's showing now in Boston, St. Paul and Houston. Science museums are not research institutions, so in general they aren't accountable to what are known as Institutional Review Boards, which govern ethics at universities and hospitals. Mostly, science centers serve to educate and entertain. I interviewed about 25 people who work at science museums or who served on the advisory boards. (Certain museums, like Chicago's Museum of Science and Industry, refused to tell me who served on those boards.)

There's a lot of interesting information about Dr. von Hagens I wasn't able to put in the piece. For example, he'd been a political prisoner himself in the former East Germany. Or that there's a German horror movie, Anatomie, inspired by his plastinates. Or that von Hagens once danced while costumed as a plastinate in Berlin's famous Love Parade. In Europe some of von Hagens' publicity stunts reveled in sexuality, but his strategy in the United States. has been considerably more subdued.

There's a second major company that competes with von Hagens. Its shows, called BODIES... The Exhibition, are open now in New York, Tampa Bay, Atlanta, and Las Vegas. The corpses this operation displays in the U.S. all come from unclaimed Chinese bodies. Critics say that at best those bodies probably belonged to people too poor to have been buried properly. Most science museums have shied away from these exhibitions, as have other venues. The mayor of Ft. Lauderdale recently rejected the show for the city's War Memorial Auditorium, citing serious ethical concerns.

BODIES... The Exhibition has a fascinating story. Its bodies are plastinated by a Dr. Sui Hongjin, once a protege of Dr. von Hagens. After splitting from his mentor, Sui struck out on his own and partnered with Premier Exhibitions, best known for its traveling exhibitions of HMS Titanic artifacts. Sui and von Hagens are now bitter rivals, and Body Worlds and BODIES... The Exhibition have been involved in multiple lawsuits.

Dr. Todd R. Olson, who chairs the Anatomical Committee of the Associated Medical Schools of New York, told me that it's easier to get a cadaver in and out of the United States than a head of lettuce. Regulations differ on a state-by-state, even municipal, basis. (Officials in San Francisco began contemplating banning body exhibitions from the city after the cadavers in a show called The Universe Within started to leak fluids.) Shows of dead human beings are something few governmental bodies have gotten around to regulating. But given their continuing popularity -- upcoming shows are planned for Arizona, Baltimore and Vancouver -- it's something that more and more state and municipal officials will have to consider.

In the meantime, the shows continue to spark fierce debate. Some argue that even if the bodies were obtained improperly, they're now serving a noble function -- it's better to educate than to rot. Others see them as a sort of gruesome Brechtian parody of capitalist excess. Thinking about attending? Dr. Howard Markel of the University of Michigan, whose voice you'll hear in the first piece, says every person has an internal Geiger counter of ethics as good as anyone else's. "If you feel in the pit of your stomach that gurgling noise, or if you feel goosebumps on the back of your neck, you probably ought to listen to it. And you ought to think about it."