Accessibility links
Exiting Iraq: Maj. Gen. John Batiste's View In the fifth in a series of interviews about a U.S. exit strategy for Iraq, retired Maj. Gen. John Batiste says he believes the U.S. has failed in Iraq, but should stay there. However, he says Secretary of Defense Donald Rumsfeld must go.

In the fifth in a series of interviews about a U.S. exit strategy for Iraq, retired Maj. Gen. John Batiste says he believes the U.S. has failed in Iraq, but should stay there. However, he says Secretary of Defense Donald Rumsfeld must go. 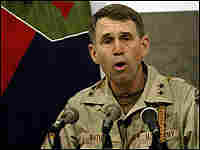 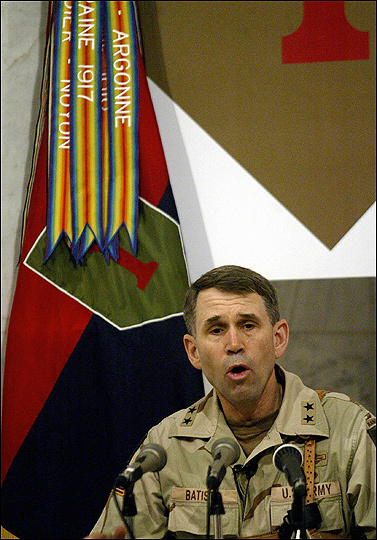 Sectarian violence persisted in Iraq this week with attacks in many parts of the country. The deadliest was a bomb that went off near one of the holiest Shiite shrines in Najaf, killing and injuring dozens of people. U.S. troops are participating in hundreds of operations a week to try to root out death squads in Baghdad. John Batiste is a retired major general who led the first infantry in Iraq. He turned down the number two command in Iraq and ended a promising career last November so he could speak out about the war. He's now the head of Klein Steel and he joins us from the studios of WXXI in Rochester, New York for another in our series of conversations about how and when the U.S. may leave Iraq. General Batiste, thanks very much for being with us.

General JOHN BATISTE (Retired): Thanks, Scott. It's great to be with you.

SIMON: How would you characterize the current situation and the choices facing U.S. policy makers?

Gen. BATISTE: Boy, we are in a real predicament, you know, and there's lots of discussion about whether or not we're in a civil war. And quite frankly, I don't think any of it makes any difference. Whatever it is, it's uncontrollable chaos. We've lost the initiative. And quite frankly, it didn't have to be that way.

SIMON: But what's the choice, do you think, that confronts policy makers? And I understand because you - I kind of set up the question in a leading way because you have been outspoken in expressing the idea that the United States has to do one thing or another at this point.

Gen. BATISTE: That's right. You know, we are at a decision point, a crucial decision point. And we have two options. One, we can continue and to finish what we started in Iraq. If that's the course of action that we select, we need a strategy. It's not more of the same. But leadership and a strategy that is communicated to the American people in such a way that we all understand the what and the why.

You know, this nation in the past four years has not been mobilized for war. I'll tell you, when I came back from Germany in June and July of 2005, I was absolutely stunned that it was business as usual back home. Now, remember, I had been gone for three years. But I was absolutely stunned, as was my family and those around that were deployed with us, were stunned that when we got home this country was not mobilized for war. Beyond the occasional bumper sticker and certainly people who were sending care packages and supporting troops that they knew, perhaps family members, beyond that there was nothing.

There was no national level mobilization. There was no rationing system of any sort. I don't think that's the way that you prosecute a war. I think we're better than that. And we are spending a billion and a half dollars a week. We're spilling American blood in amounts that outrage me. And it just didn't have to be that way. On the other hand, if the decision is that we're not going to continue...

SIMON: Hey, General - can I interrupt for just a moment? We're hearing like a pounding, which we suspect might be you striking the desk in emphasis. Is that true?

Gen. BATISTE: It may be.

SIMON: If that's the case, we don't want you to be any less emphatic.

SIMON: But if you could leave your hand out of it...

SIMON: ...because we get vibrations in the mic. Okay. I'm sorry.

SIMON: You began to say, on the other hand.

Gen. BATISTE: On the other hand, if the decision is that we should leave Iraq, then I think we have an obligation to the good people of Iraq to do what we can to set them up for some form of success, some other form of representative government, whatever makes sense for them. I think we need to then deliberately withdraw our forces, and again, in a way that makes sense. But most importantly, we all have to accept the consequences of our actions when we do that.

SIMON: What do you think the consequences would be if there was a relatively rapid draw down of U.S. forces?

Gen. BATISTE: Oh, I think there'll be incredible consequences for that region. We have stirred up a hornet's nest. We have opened Pandora's Box and the genie is out of the bottle, and we're having a hell of a time putting her back in the bottle.

SIMON: You know a lot of the men and women who've served under you. What effect - realizing that generalizations have to be, even for a retired general, should be made cautiously - but what are some of the effects that the war has had on the young men and women serving in uniform?

Gen. BATISTE: Yeah. Yeah. This is something that's important. Our Army right now is in trouble. I can't speak for the Marine Corps. Other than the brigades that are deployed into Iraq and Afghanistan, the rest of the brigades are at a unbelievable state of unreadiness. The National Guard brigades have something in the order of a third of their equipment. This is a serious problem that we didn't anticipate. We, the Secretary of Defense, didn't anticipate back in March of 2003 when he took us into this endeavor.

SIMON: What would be your recommendation now, General?

Gen. BATISTE: Well, number one is we've got to have a new Secretary of Defense and his inner circle. Secretary Rumsfeld - Donald Rumsfeld has so much baggage that he's carrying around that's related to his past poor decisions, very poor judgment, that quite frankly in my view he can no longer serve the people of the United States or our president. He needs to go. We need fresh blood at the top of the Department of Defense right now. We can't wait until there's a new administration.

And then we need to have a serious debate, and the Senate and the House need to be involved. I was encouraged last week, on the 3rd of August, when the Senate began to take account. And some great senators on both sides of the aisle - McCain, Reid, Hagel, Clinton, and others - started to ask questions. This is in the Senate Arms Services Committee. And the same needs to happen in the House of Representatives. The House Armed Services Committee has been strangely silent. My hope is that Congressmen Duncan Hunter can pull it together and start asking great questions.

And as I've described, if the answer is let's continue, then we need a new strategy. And then we got to get at it in a serious way, which includes, I think, the main effort being standing up a competent Iraqi security force. Come hell or high water, we're going to make it happen.

My personal opinion is, having buried a number of soldiers, and having had way too many soldiers wounded in that conflict, having gotten to know so many of these great Iraqis, 25 million people, there's a bunch of them that really, really deserve to have a better life and they're counting on us, we have an obligation to give it another shot here in a serious fashion and deal with this insurgency.

SIMON: Retired Major General John Batiste led the First Infantry in Iraq. Thanks very much for being with us.