Accessibility links
Happy Birthday, Dear Mayo -- We Hold You Dear While theories on the origins of mayo differ, the most common has the condiment celebrating its 250th birthday this summer. It was created, so the story says, after a French duke captured Minorca and its port of Mahon. (Hence, Mahonaise.) 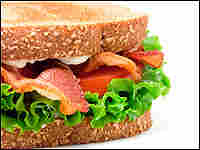 A BLT and DON'T hold the mayo. Thanks, Duke... or whoever might be responsible. iStockPhoto.com hide caption 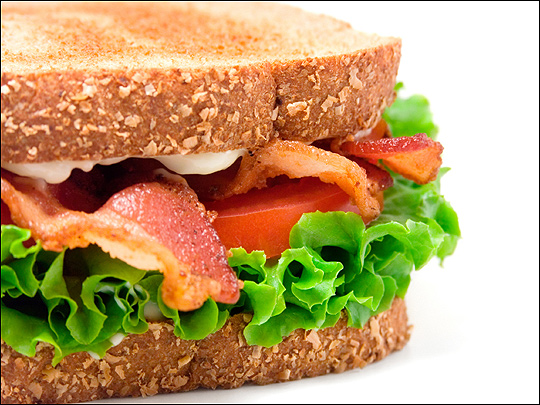 A BLT and DON'T hold the mayo. Thanks, Duke... or whoever might be responsible.

Hear Professor Michael Doyle of the University of Georgia

We thought we'd put to rest an old bit of conventional wisdom about mayonnaise that may not be so wise after all. Commercial mayonnaise will not cause food poisoning if it's left out in the heat for a bit. Debbie Elliott confirmed this in a conversation with Michael Doyle, a professor of microbiology and director of the Center for Food Safety at the University of Georgia

Will mayonnaise make you sick if you leave the picnic potato salad out too long in this heat?

Dr. Doyle: There's an old wives' tale that mayonnaise being added to perishable foods will cause food poisoning. That's not true. Acid is added to mayonnaise to prevent these bad bacteria from growing and producing illness. However, there are certain types of micorganisms — such as molds and other types of bacteria — that can spoil mayonnaise. [They] don't make you sick, but they can spoil mayonnaise. So once mayonnaise has been opened, it's important to refrigerate it so that the spoilage bacteria don't grow and cause "off flavors."

But there's a difference between something being spoiled and something that can make you sick?

There's a big difference between the harmful bacteria that can make you sick and the spoilage microorganisms that just make the food not taste good.

What gives commercial mayonnaise this acid?

Vinegar is added to the mayonnaise, and there's a standard of identity that the FDA has defined. A certain amount of vinegar has to be added to mayonnaise, which will then kill these harmful bacteria.

We're talking here about commercial, store-bought mayonnaise... not the mayonnaise you might make at home?

This is specific to store-bought, commercial mayonnaise. The mayonnaise you make at home, you might not add much vinegar or may not add any at all. If you don't add this level of acid that is used in commercial mayonnaise, then all bets are off. You may have harmful bacteria surviving, should they be present.

It actually could help food from going bad?

When you add mayonnaise to a salad — like a ham salad — it will reduce the rate at which harmful bacteria grows. So, in essence, it does help preserve the salad. But I still wouldn't encourage one to NOT refrigerate salad. As soon as you've prepared the salad and served it, then it's important to put it back in the refrigerator.

But it's OK if it's out on the buffet for an hour or so?

That's no problem. That would work.

Without the Duc de Richelieu we might not have tuna salad. Or cole slaw. Or a proper BLT. All have a common element: mayonnaise. And while theories on the origins of mayo differ, the most common has the condiment celebrating its 250th birthday this summer.

Here's that version in a nutshell: Gen. Louis-Francois-Armand du Plessy, duc de Richelieu, led his troops onto the island of Minorca in June 1756, taking it from the British. To celebrate, the duke's personal chef created a feast -- and a new sauce.

Richard Gutman, curator of the Culinary Archives and Museum of Johnson and Wales University in Providence, R.I., offers Debbie Elliott more details on the mixture named for Richelieu's point of attack: the island port of Mahon. Voila! Mahonaise.

(Now, to be fair, some historians believe the delicacy began as moyeunnaise, derived from the old French word for egg yolk --moyeu. Still others believe it was created in the French town of Bayonne, and was first called bayonnaise.)

But mayonnaise didn't become a staple of the American diet until after a German immigrant named Richard Hellman opened a deli in New York City in 1905. His wife's recipe was used in many of the deli's salads. Hellman began selling two varieties, one decorated with a blue ribbon. By 1912, he started bottling the blue-ribbon version. And there's still a blue ribbon on the label of every jar of Hellman's -- or Best's, as it's called in the West.