Accessibility links
British Muslims Reach Out to Radicalized Youth In the aftermath of arrests in the alleged airline bombing plot, British Muslims warn that radicalization is a growing problem among their youth. The community is trying to reach out to its alienated young people by challenging extremist organizers. But the mainstream Muslims need government support to succeed.

In the aftermath of arrests in the alleged airline bombing plot, British Muslims warn that radicalization is a growing problem among their youth. The community is trying to reach out to its alienated young people by challenging extremist organizers. But the mainstream Muslims need government support to succeed.

The arrests this past week have raised substantial concerns about the radicalization of young Muslims in the U.K. Prominent British Muslims, including members of the governing Labour Party, sent an open letter to the government charging that British foreign policy - particularly support for American policies in Iraq and Lebanon - gives ammunition to extremists.

NPR's Debra Amos reports from London that extremist views are growing for complex reasons and could take years to reverse.

The room is crowded with young professionals gathered for a weekly meeting called the City Circle near Edgware Road, a predominantly Muslim neighborhood. They are British-born Muslims - doctors, lawyers, architects - successful and comfortable with their religion and their British roots. But the arrests this week has prompted deep concern, says the City Circle's chairman, Asim Siddiqui.

Mr. ASIM SIDDIQUI (Chairman, City Circle): Extremely, extremely small in number in terms of radicalization. But I think that is increasing amongst young people - of young Muslims, British Muslims. And the question is why?

AMOS: The answers are varied. But one factor: young Muslims say they feel alienated from British society. Just 44 percent of 18 to 24 year olds claim Britain is their country. Conflicts over identity and loyalties are at the root of social problems - depression, suicide, and crime - says Mohammed Mamdani. He founded the Muslim Youth Hotline, one of the few national service organizations for young Muslims.

Mr. MOHAMMED MAMDANI (Founder, Muslim Youth Hotline): Here in the U.K. we have a particular crisis in the sense that we have a very large Muslim prison population. One in five of the young people in prison is of Muslim origin, despite the fact that we only make up five percent of the population.

Unidentified Woman: Well, just how about like the more you deal with these things, the more experience you're going to gain...

Mr. MAMDANI: I am not convinced that the leadership of the Muslim community or, for that matter, the government have a true understanding what the problem is or what the solution is, because (unintelligible) we're not dealing with it.

AMOS: The Muslim population is young. Fifty-four percent are under the age of 24. Many are religious, but have turned away from the mosques of the older generation, where Friday sermons are often delivered in the native languages of the immigrant communities.

AMOS: This East London mosque is one of the few that has broken the tradition. Sermons are in English, delivered by a young, well educated prayer leader, Usama Hassan(ph), who wants to bring young people back to the mosque.

Mr. USAMA HASSAN (Muslim Prayer Leader, East London): Well, I think it's the beginning. Along with the word, there has to be disengagement with young people, in terms of looking after their social needs and understanding them.

All praise belongs to Allah, the most high, the irresistible.

AMOS: Hassan, a university professor, a scientist by training, says he reaches out to radicals, shares his experiences and his wide travels.

Mr. HASSAN: Many of our young, angry British Muslims who call for simplistic solutions like the Islamic state will solve everything, or Islam is the solution to everything, have actually never been to a Muslim country, where they will serious abuses of Islam and far worse than any preachers that we may have in Western countries.

AMOS: In the days since the arrest, the British government has carried out a subtle hearts and minds campaign, avoiding the term Muslim or Islamic extremist when describing suspects. But the seeds of extremism were sown long ago, says Asmar Sadiqui(ph).

Mr. ASMAR SADIQUI: We have got into this mess over the past two decades at least. You had extremist preachers coming into the U.K. from the early '80s.

AMOS: Some radical preachers were deported last year, following the suicide attacks on the London transport system. But an alienated population remains a target for radical ideology, says Sadiqui.

Mr. SADIQUI: There's almost a new cult that has emerged under the name of Islam, and Muslims and world society have got to deal with that.

AMOS: Some are trying, with innovative programs. Barbar Sadiqui(ph), with the Luqman Institute, a charity in Britain, is what you can call a deprogrammer, challenging extremist organizers on college campuses.

Mr. BARBAR SADIQUI (Luqman Institute): Oh yes, they're all over the place and its very difficult to sort of take on their group because they're very well organized. They've been around for such a long time, since the late '80s. So they're established, very, very sophisticated. You look at their Web site, their publication. They have sort of support structures, sort of throughout the U.K. and worldwide.

AMOS: In this battle of ideas, Sadiqui says his work takes patience at the grassroots level.

Mr. B. SADIQUI: It is reversible. You see, where these people are they - over a period of time, they become so narrow minded, they become so sort of charged with hate and anger. You know, these people can be engaged and slowly they can be sort of drawn out of that, brought back as it were from the sort of narrow vision that they have.

AMOS: It is a long-term solution that needs the full support and funding of the British government, but just one of the solutions for a crisis that threatens to further divide British Muslims from the rest of the population.

Among Britain's 1.8 million Muslims, anxiety is growing over a sharp rise in what the British call Islamophobia. Post-Sept. 11 anti-terrorist legislation and proposals for even tougher measures have led to widespread disaffection, anger and isolation among Muslim youth. The result is a widening generational disconnect, as NPR's Sylvia Poggioli reports from London in the third story in our series on Muslims in Europe.

Britain is unique in Europe: after the breakup of its empire, it became a haven for Muslims from around the world, and it nurtured a Muslim establishment, whose members include prominent doctors, lawyers, writers and journalists. 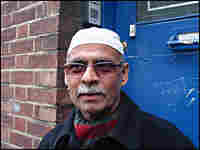 Mohammed Sham-Su'ddin, 55, lives in London's Banglatown neighborhood. A Muslim from India, Sham-Su'ddin says he no longer feels safe: "The police stop us, search us, but we have nothing, police can search anybody." Sylvia Poggioli, NPR hide caption

A recent poll showed that 33 percent of Muslims want more integration in mainstream British society. But Britain's Muslim upper crust -- whose size is difficult to measure -- is a leadership without followers. The vast majority of British Muslims live in poor, closed communities. 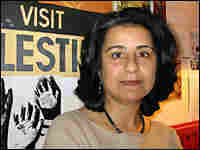 Egyptian-born author Ahdaf Soueif, who has made London her home, worries that the rise of Islamophobia is eroding what she calls the "mezzaterra:" Sylvia Poggioli, NPR hide caption

This was the world that my generation believed we had inherited, an area of overlap where one culture shaded into the other, where echoes and reflections added depth and perspective, where differences were interesting rather than threatening because they were foregrounded against a backdrop of affinities.

The men who live in these Muslim enclaves are keenly aware that they've become the prime targets of police scrutiny. According to a report issued last week by the Open Society Institute, young Muslim men are increasingly at risk of social exclusion; many feel they are "under siege."

The Israeli-Palestinian conflict and events in Iraq have further fuelled the polarization and radicalization of young Muslim men. It's a source of anguish for British Muslims who still believe in what Egyptian-born author Ahdaf Soueif calls the "mezzaterra" -- the common ground between cultures.