Accessibility links
AIDS Treatment Remains a Delicate Balance More than 20,000 people are expected to attend the 16th annual International AIDS conference underway in Toronto, Canada. AIDS has become a treatable chronic disease in wealthy countries like the U.S. Despite advances, treating AIDS is still not a simple matter.

More than 20,000 people are expected to attend the 16th annual International AIDS conference underway in Toronto, Canada. AIDS has become a treatable chronic disease in wealthy countries like the U.S. Despite advances, treating AIDS is still not a simple matter. 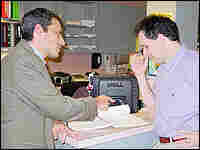 The 16th International AIDS Conference is underway in Toronto, Canada. It will focus on expanding treatment to people in the poorest countries, where limited numbers of people are on anti-AIDS drugs.

NPR's Brenda Wilson found, however, that treating people with HIV is anything but simple.

In Houston, the discreetly named Thomas Street Health Center is a one-stop source of medical care for more than 4,000 people with HIV. It includes a brightly lit, bustling pharmacy in the basement.

WILSON: Williams is waiting for three prescriptions, all of them for problems related to HIV or the side effects of the medications for treating it.

Dr. THOMAS GIORDANO (Thomas Street Health Center): The days of waking, setting your alarm clock for three in the morning to take your AZT are gone, fortunately, but people still have to take a lot of medicines often.

WILSON: AZT was the first anti-AIDS drug. It was taken alone, but it had to be taken every four hours around the clock. And the virus quickly became resistant to it.

The major breakthrough of combination therapy was announced ten years ago at the International AIDS Conference in Vancouver. Drugs like AZT and others could be combined in cocktails with protease inhibitors and other anti-AIDS drugs to keep the virus on the defensive.

Giordano says that allowed immune systems to rebound, and people are living longer and aging.

Dr. GIORDANO: So they're getting heart disease and they're getting high blood pressure and diabetes. They probably have a familial history of it and maybe would develop it ultimately, but because of the HIV and the medicines, they are probably developing it earlier than they would.

WILSON: Patients who think they've cheated death find that they then must face a series of medical obstacles as they get older.

Dr. WAYNE SHANDERA (Baylor College of Medicine): Okay, well, let's have you sit up here so I can examine you.

WILSON: Dr. Wayne Shandera, an infectious disease specialist at Baylor College of Medicine, spends two days a week at Thomas Street. One of his star patients is Carolyn(ph), a tall, self-effacing yet regal woman who doesn't want her last name given.

CAROLYN (AIDS Patient): When I first came here, I was a walking zombie. I was too stubborn to get in a wheelchair, and I was leaning against a wall.

WILSON: That was ten years ago, Shandera remembers.

Dr. SHANDERA: You had trouble swallowing, and you had a fungus. Remember? And you responded well to therapy, and you have done really very well, haven't you?

CAROLYN: Yes, very well. At one time I thought I wasn't going to make it, but...

Dr. SHANDERA: You've had some complications with the therapies, though, haven't you?

CAROLYN: Different medications, until we found one that worked better in my system.

WILSON: There's a broad selection of anti-AIDS drugs to choose from now, and the regimens have dropped to twice and even once a day. But some can be difficult to take.

CAROLYN: Ziagen was one of them. I couldn't really do much of anything. I was just barely existing with it. Not knowing that was it, I thought (unintelligible) depression (unintelligible) the medication.

WILSON: Certain people with HIV can't take Ziagen, and African-Americans tend to be more likely to have a bad reaction - swollen glands, fever, rashes. When treatment with Ziogen is stopped and then started again, it can be fatal.

Carolyn is taking ten pills a day for high cholesterol, hypertension, diabetes and depression. Like many AIDS patients, she also had problems with Kriksovan(ph), a protease inhibitor.

CAROLYN: They took me off that when they found out I was diabetic.

Dr. SHANDERA: And then also you had some trouble with fat accumulations at one point. It was one of the concerns that we had.

CAROLYN: It's still (unintelligible) the fatty tissue is pretty much settling in my abdomen area, in my upper torso. And it's kind of decreased on my arms and legs.

WILSON: There's some disagreement over whether HIV or the medicines contribute to a syndrome where extra pads of fat accumulate on the belly, and neck and the legs and arms become very skinny.

Thomas Street director Giordano says it's not that clear cut.

Dr. GIORDANO: People certainly lose weight when they get AIDS, but with the treatments, often people put on weight again and sometimes put on too much weight. And I think that's partly American lifestyle and partly the medicines.

WILSON: Most AIDS experts agree that anti-AIDS drugs can lead to high cholesterol rates, which increase the risk of heart disease. And the HIV-AIDS drugs are notorious for interactions with the drugs that are used to treat some of these conditions.

Thomas Street keeps a roster of specialists that Dr. Shandera can call upon when a patient has complications that stump him.

Dr. SHANDERA: And you have a new problem today?

WILSON: Fifty-seven-year-old Henry Williams is managing HIV very well, but he has a fairly common problem related to the medication's toxicity: neuropathy, a tingling in his feet that comes and goes. But these new pains are different. They will have to be tests and Henry will get more painkillers: Neurontin. Otherwise his current medical regimen is a lot simpler than the 20 pills he used to take.

WILSON: So when you started out, did you have to take more meds?

Mr. WILLIAMS: Oh, yes. I took a lot of meds when I first started out.

Dr. SHANDERA: You came just at the knick of time, didn't it? Because...

Dr. SHANDERA: You are very fortunate, because it was 1996. And if you had presented just two years earlier, you probably wouldn't be here.

Mr. WILLIAMS: I had several friends that died, so I feel very lucky.

WILSON: Williams lives on disability, his treatment paid for by Medicare. If there is a glitch in the treatment of people with HIV in the U.S., it's getting them into care, particularly if they're not insured. Every state is different, some more generous than others. Thomas Street is open to anyone with HIV, but mostly Houston's poorest.

The Harris County Hospital district pulls in $22 million each year for AIDS care from a variety of federal and state programs such as Medicaid and the federal Ryan White Care Program.

Director Thomas Giordano says this fragmented system of healthcare can put the lives of poor people with HIV at risk.

Dr. GIORDANO: If you have HIV and you go a week without your HIV medications because of an administrative snafu, you could actually suffer adverse consequences. Your HIV might become resistant to the medicines that you're on and you might have to change medicines. And there's only so many times you can change medicines before you're out of options.

WILSON: It is estimated that a fourth of the 800,000 people in this country with HIV don't know they're infected. Most will find out the way Carolyn did, when they get sick. But they may also discover, as she did, that that is when the healing begins.

CAROLYN: I said, well, if God hadn't taken me out this way, maybe it's not time. Maybe there's something else He want me to do in life. So actually I've been a lot more healthier. It's made me a lot stronger. When I tell people that, they look at you, like, oh, man, she's weird. Why would she say that?

WILSON: Learning that you have HIV is a life-altering experience requiring vigilance, attention to health and a lifetime on medications to keep the virus in check. It means never having sex without exposing others to the virus unless precautions are taken, and always knowing that death is never very far away.

-- Southern Africa is the epicenter of the global epidemic

-- In Botswana, Lesotho, Swaziland and Zimbabwe, more than 20 percent of the adult population is infected

-- South Africa (along with India) has largest number of people, 5.5 million, living with HIV

-- 17 percent of those in need of antiretroviral treatment receive it

-- The U.S. has seen resurgence in HIV transmission in recent years, primarily among men

-- 25 percent of those infected don't know

-- 44 percent of new infections are in gay men

-- 55 percent of those in need of antiretroviral treatment receive it