Accessibility links
Abu Ghraib Whistleblower Speaks Out No longer restrained by a a government gag order, the Army Reservist who turned over pictures of inmate mistreatment at Iraq's Abu Ghraib prison to military investigators is discussing publicly his decision to disclose the abuse. 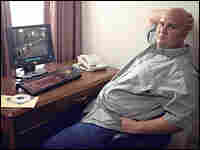 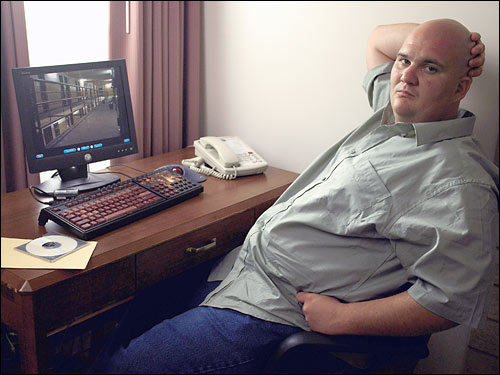 Sgt. Joseph Darby disclosed the prisoner abuse at Abu Ghraib to military investigators. Scroll down to read his story.

No longer restrained by a government gag order, the Army reservist who first told military investigators about photos of inmate abuse at Iraq's Abu Ghraib prison is speaking out.

Many of Sgt. Joseph Darby's former comrades from the 372nd Military Police Company have been sentenced to prison for their roles in the Abu Ghraib case. Darby, who will leave the Army at the end of August, cooperated with those prosecutions.

Prisoner abuse started at Abu Ghraib even before his unit arrived, Darby says. "Disgusted" by the now-infamous photographs, he decided to alert the Army's Criminal Investigation Division.

He says that he asked Army Spc. Charles Graner -- who is now serving a 10-year sentence for his role at Abu Ghraib -- for photographs of their time in Iraq that he could keep as mementos. One of the CDs Graner gave him contained the photos of the prisoner mistreatment.

His identity as the whistleblower was made public in May. When he returned to the United States, Darby was placed in protective custody.

Nonetheless, Darby says disclosing the abuse was "the right decision and it had to be made."

Darby's story will appear in the September issue of GQ magazine, an excerpt of which appears below.

In 2004, an American soldier stationed at Abu Ghraib handed a CD full of incriminating photographs to the Army Criminal Investigation Division. The soldier's name was Joe Darby, and the pictures showed the world what was happening at the now notorious prison. For this act of courage, he was vilified by his fellow soldiers, his friends, and even his family. Now, for the first time, Darby tells his story.

As told to Wil S. Hylton.

The compound had a main prison, which was two stories high, a series of smaller prisons, an administrative building, and a small building called the Death Chamber. That's where Saddam used to torture his prisoners. There was a room with ceramic tile on the walls, floor, and ceiling so the blood would come off easily. Outside, there was a tent camp. That's where we housed the prisoners who'd committed normal crimes. Some of them were really minor offenses that would only get a two-month sentence, but they might be housed for three years while they waited for trial. The system was that backed up.

As long as the mortars landed on a building, it wasn't a big deal -- they weren't powerful enough to pierce the roof. But if one landed in the yard or in the tent camp, it could do a lot of damage. Like, one night they got lucky and split our fuel tanker in half. Dropped a mortar right through it. It caused a fire you could see for miles, probably 4,000 gallons of burning fuel. Another time, they dropped one in the middle of a prisoner prayer group. That was pretty bad. These guys had just been sitting in rows, facing Mecca and praying, when the mortar came in. We had fifteen to sixteen dead and a bunch more wounded. We had to dig through the bodies, put them in body bags, and take them to the processing area to check them out of the prison. Whenever a prisoner was brought in, we would ID them with a retina scan and fingerprints, so when they died, we had to process them out the same way. Which meant that, for the rest of the day, we were digging through body bags looking for eyeballs. Sometimes there wasn't an eyeball we could use, so we'd look for a finger. You just had to tune it out. You couldn't let it get to you. You got numb.

But it catches up to you later, when you get home. Like, I slept fine while I was there, but now I have nightmares. And a few days before my unit left Abu Ghraib, all of a sudden people started worrying about mortar attacks for the first time. It was weird. They'd be huddling against the wall together. I found myself crouched in a corner, praying. The numbness was wearing off. That's one of the things you have to keep in mind when you look at the pictures. We all got numb in different ways.

I'll say this, too: The abuse started earlier than anybody realizes. Nobody has ever said that publicly, but there were things going on before our unit even got there. The day we arrived, back in October of 2003, we were getting a tour of the compound and we saw like fifteen prisoners sitting in their cells in women's underwear. This was day one; nobody from our unit had ever set foot in the prison. We asked the MPs in charge -- the Seventy-second, out of Las Vegas -- why the prisoners were wearing panties. They told us that it was a corrective action, that these guys had been mortaring the compound. So probably the MPs decided to mess with these guys. This stuff was going on before we arrived. After we took over, it basically just escalated.

The other thing was, there were other government agencies who would come into the prison and handle prisoners. I can't say which agencies, but you can probably guess. Sometimes we didn't know exactly who they were. We'd get a call at like three in the morning from the battalion commander, saying, “You have a bird coming in. You need to take prisoner such and such from cell whatever to the landing zone in fifteen minutes.” So I'd put my gear on, cuff the prisoner, bag him, go to the LZ, wait for the helicopter to land, and then hand the prisoner off to the guys inside. I didn't know who they were. Didn't ask. When they tell you not to ask any questions, you don't ask questions. They might bring the prisoner back in a few hours, or the next morning, or two days later. You didn't ask. Other times, they would bring a new prisoner into the compound. You didn't know who they were, or who the prisoner was, or what he had done, or what they were going to do to him. You just handed over the cellblock. One night, this Black Hawk landed at about 4 a.m., and a couple guys came in with a prisoner and took him to tier 1, put sheets up so that nobody could see, and spent the rest of the night in there. They told us to stay away, so we did. Then a couple hours later, they came back out. They were like, "The prisoner is dead." They asked for ice to pack him, and then they said, "You guys clean this up. We weren't here. Have a good day." Got back on the bird and took off, left the dead body right there. Those guys can come in and kill a guy, and there's nothing you can do. There's no record of them. They were never there. They don't exist.

You've probably seen pictures of that prisoner with Graner and Harman crouching next to his dead body, giving the thumbs-up. Well, that's the guy. Everybody takes that picture at face value, but the truth is, Graner and Harman didn't kill him. And when something like that happens, it stretches the limits. Maybe Graner and Harman came away thinking, Okay, let's take it further.