Accessibility links
Salif Keita Returns to Mali's Traditional Sounds Salif Keita has been called the "golden voice of Mali" and a pioneer of the music called Afro-pop. But his latest CD, M'bemba (Ancestor), features traditional African instruments and a "more spontaneous" sound. 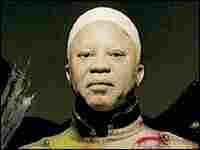 Salif Keita was one of the first Malian singers to reach an international audience. Mai Lucas hide caption

Salif Keita has been called the "golden voice of Mali" and a pioneer of the music called Afro-pop. He was born of royalty -- a direct descendant of Mali's 13th-century founding father -- but was shunned by his family.

His albino skin (in Africa, albinos are widely considered bad luck) and poor eyesight made him an outcast.

"The tradition makes albinos victims," Keita says. "They seem different because in Africa everybody's black -- and we are white."

In the mid-1960s, he developed a new African dance music influenced by places both in and outside Africa, including black America and the Middle East.

But today his music is looking back, using more traditional African instruments and a less electric sound. His latest CD is called M'bemba, which means ancestor.

"The acoustic sound is more emotional, more spontaneous," Keita says. "It is closer to reality and this is a reality I was born in and grew up in."

In addition to his musical career, Keita has begun a foundation dedicated to albinos and is trying to raise money for a school and clinic in Mali for people with the condition.