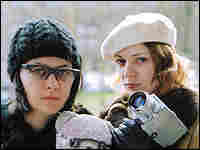 Camera Obscura formed in Glasgow (also home to its kindred spirits in Belle & Sebastian) in 1996, releasing singles on and off until the 2001 release of Biggest Blue Hi-Fi. Produced by Belle & Sebastian's Stuart Murdoch, the album garnered praise from critics and listeners alike, notably landing Camera Obscura on BBC DJ John Peel's list of 2001's most promising bands. Underacheivers Please Try Harder, Camera Obscura's second album (and first to be available in the U.S.), was released in 2004 to continued critical acclaim. The band's new record, Let's Get Out Of This Country, came out earlier this summer, and finds the band continuing to mature and develop as both musicians and songwriters.

Album
Let's Get Out of This Country
Artist
Camera Obscura