Accessibility links
Obesity Surgery Puts Ex-Football Star Back in Play At 53, former USC running back Anthony Davis knew he'd lost control of his body. Life got in the way of keeping in shape, he says and dieting wasn't working. So he turned to gastric bypass surgery. He's since lost the pounds, but the toughest months may still be ahead. 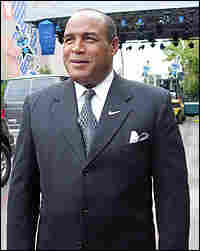 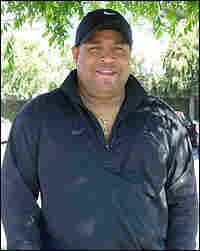 Davis, in March 2006, a few weeks before his bariatric surgery. W3PR hide caption

Surgery Not for Everyone

Your Questions on Weight-Loss Surgery

Have questions on the effectiveness and risks of gastric bypass surgery? Submit them to experts Dr. Ed Livingston and Dr. Paul Shekelle.

We will not be able to respond to your e-mails individually, but check back Thursday, Aug. 24, 2006 for Livingston's and Shekelle's responses.

Livingston is a professor of surgery at the University of Texas Southwestern Medical Center.

Shekelle is director of the Evidence-based Practice Center at the Rand Corp. and an associate professor of medicine at the University of California, Los Angeles.

Anthony Davis is best remembered for his days as a running back for the University of Southern California Trojans back in the early '70s, when he scored 11 touchdowns against top rival Notre Dame. The performance is considered legendary, and last weekend Davis was inducted into the College Football Hall of Fame.

But 30 years later, Davis' post-football lifestyle has taken its toll on his health.

When Davis got word last year that he'd been nominated to the College Football Hall of Fame, he says two emotions sprang forth: elation at the thought of being honored, and complete anxiety knowing that he no longer looked or felt much like an athlete.

Life Gets in the Way

But getting back has been tough. Life gets in the way. There've been financial troubles, and raising his daughter as a single parent.

"When I think back on it, I think that's what really happened -- the stress. The stress of life," Davis says.

Time for exercise seemed to disappear. And when he did try to condition, old injuries got in the way. As the weight piled on, it led to sleep apnea, diabetes, gout and the frustration of not being able to bend over easily to tie his shoe.

But early last year his resolve kicked in. Davis says the sudden death of former NFL player Reggie White, who also battled with weight and sleep apnea, hit him hard.

Dieting brought off some weight. Then, Davis opted for a more drastic step: bariatric surgery. It was suggested by a friend who runs a Web site that promotes the procedure.

He agreed to let those promoters pay for part of the surgery and Webcast it as a form of direct-to-consumer marketing. In early March, Davis went under anesthesia at Scripps Memorial Hospital in La Jolla, Calif.

Dr. Alan Wittgrove performed the 50-minute procedure. He also advises the promotion group which paid for part of Davis' surgery.

In the operating room, Wittgrove's job was to craft a tiny half-ounce-sized stomach for Davis. The first step was to divide the stomach into two parts. Then, the new pouch is connected directly to the small intestine. It's a critical moment.

"This is the place where all bariatric surgeons kind of hold their breath a little bit," Wittgrove says.

A Different Relationship with Food

Davis was awake and alert a few hours after the surgery. It would be weeks before he had much of an appetite. It turns out the surgery temporarily cuts off the stomach's production of ghrelin, a powerful hormone that serves as a signal for hunger.

"That's one of the reasons people do better after this operation, because they have a different relationship physiologically to food," Wittgrove explains.

For Davis, the combination of a small appetite and a tiny stomach has led very quickly to significant weight loss. When NPR telephoned him in July, he was down almost 75 pounds.

His blood-sugar tests are normal, and his sleep apnea has improved significantly. Davis is now back to work fulltime, managing a construction site in Los Angeles. He's on his feet all day, walking, and he says he feels good.

For the first time in 15 years, Davis says he's starting to feel like he really is that guy the sports commentators remember, the football player who ran memorable touchdowns.

He says the peace of mind offsets all the inconveniences, such as the food restrictions, like having to swap larger cuts of meat for thin slices of sirloin steak.

If the food is soft and easy to digest he can eat, for instance, two scrambled eggs in 20 minutes. Then he snacks throughout the day on foods such as pinto beans and tomatoes or avocados. Occasionally, if he eats rich food or eats too quickly, there's trouble. He had an episode recently when he tried a heavy noodle dish.

"It's tough," he says. "You go into a cold sweat… you don't want anything going down fast. It's a tough experience."

But it only lasts an hour or so.

Davis knows the toughest days may be ahead. In many cases, gastric bypass patients start getting back a serious appetite about six months after surgery.