Accessibility links
Taxi Drivers Wary of GPS Tracking Plan Cab drivers in Philadelphia are protesting a move to equip their taxis with Global Positioning System units. The tracking devices would allow dispatchers to pinpoint a taxi's exact location. But the drivers say this would be a violation of their privacy.

Cab drivers in Philadelphia are protesting a move to equip their taxis with Global Positioning System units. The tracking devices would allow dispatchers to pinpoint a taxi's exact location. But the drivers say this would be a violation of their privacy.

Wheel-Life Stories of a Taxi Driver 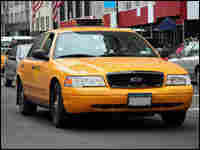 Frank Langfitt, NPR's labor/workplace correspondent, spent about a year driving taxis in and around Philadelphia in the 1980s, during summers off from college and after graduation. For an aspiring journalist, it was great job. Every fare was a potential interview. Everybody had a story.

Driving a taxi, you see the kaleidoscope of urban life. A cab can be like a confessional on wheels. There's no direct eye-contact, except through the rear-view mirror.

Sometimes, you meet people at their most vulnerable.

One summer evening, the dispatcher sent me to a big house on the Main Line. The lawn was freshly cut. A woman came out in tears, carrying a suitcase. She was leaving her husband. On the way to a hotel, she explained, in raw detail, the disintegration of her marriage.

I worked for a pair of cab companies based in the suburbs. One had been owned by an attorney with polio, who appreciated how hard it was for some people to get around. It was as much a community service as for-profit business. Many of our customers were disabled or shut-ins. We often drove them to supermarkets, doctor's appointments and beauty parlors.

One of my regular customers was an elderly woman who lived alone in a red brick row house. I picked her up every few days and drove her a few blocks to a liquor store. After a few minutes, she would emerge with a bottle in a paper bag. Neither of us ever said a word.

Some calls weren't what they first seemed. My brother John -- who drove cabs before me -- remembers going to the house of another elderly lady to run an "errand."

The errand turned out to be a raccoon she had caught in a Havahart trap in her attic. "I had to bring the trap down to the cab, all the while avoiding the claws and teeth of a fairly frantic (and for all I knew, rabid) raccoon," John remembers. The woman persuaded him to drive her to Fairmount Park. They walked deep into the woods, before releasing the animal.

John thinks he got a good tip.

If some people tipped well, they didn't always treat you with respect -- something that rankles cabbies the world over. Some people drive cabs while in school or as second jobs, but many customers assume they have no aspirations beyond the wheel. Sometimes, people asked what I did before driving. I told them I had just graduated from college. Where, they asked.

I remember watching through the rearview mirror as some rolled their eyes.

They didn't believe me.

As the youngest driver, I didn't get a lot of respect at the cab companies either. The dispatcher usually gave me the worst cars in the fleet. I drove cabs with no air conditioning, or doors than didn't open. One even had a hole in the floor, so I could watch the highway rush by beneath my feet.

The worst cab I ever drove was nicknamed the "crop-duster." Apparently lacking a catalytic converter, it spewed a cloud of exhaust behind it like Pigpen in Peanuts. When I pulled up to hotels, the fumes would scatter people lined up at the cabstand.

Taxi driving can be dangerous. Most of our fares were called in to dispatchers, often from customers we knew. But some fares took us to tough parts of town.

One night in North Philadelphia, a group of teenagers chased me through the streets in their car. After a few blocks, they pulled in front of my cab and cut me off. One reached through the window and grabbed my throat. (It was a hot night and I had foolishly left the window down.) He insisted I had insulted him as he had driven past me a few minutes earlier, though he put it in different words.

One of his companions jumped on the hood of my car. Then another opened the passenger door.

I hit the accelerator and drove off as fast as I could.

That's the last I saw of them.

When I got back to the dispatcher's office that night, the other drivers nodded. At one time or another, they'd all faced the same dangers.

Now, whenever I get out of a cab at night, the last thing I say to the driver is, "stay safe."