Accessibility links
U.N. Troop Plan Slow to Materialize The Lebanese army is taking up positions in southern Lebanon to police the cease-fire between Israel and Hezbollah guerrillas. But countries promising troops under a U.N. banner to back-up the Lebanese are still holding off on firm commitments to the project.

The Lebanese army is taking up positions in southern Lebanon to police the cease-fire between Israel and Hezbollah guerrillas. But countries promising troops under a U.N. banner to back-up the Lebanese are still holding off on firm commitments to the project.

A Lebanese army soldier with the 12th Brigade holds up a national flag as his unit heads south on Thursday. Patrick Baz/AFP/Getty Images hide caption 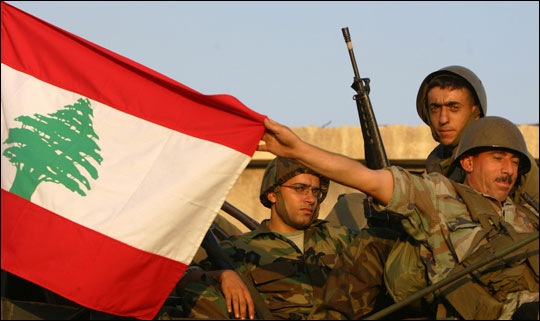 A Lebanese army soldier with the 12th Brigade holds up a national flag as his unit heads south on Thursday.

And I'm Renee Montagne. The Lebanese army has begun taking up positions in southern Lebanon. They are there to police the cease-fire between Israel and Hezbollah. The Lebanese have been promised international support in the form of thousands of reinforcements for the small UN contingent already on the ground in the south. But those countries that have promised troops are still holding off on a firm commitment.

NPR's Jamie Tarabay is in Beirut. And, Jamie, how has Lebanese army deployment gone so far?

Well, so far it seems to be moving along smoothly. Lebanese troops in tanks, armored vehicles and flatbed trucks carrying Lebanese flags began moving into the south of the country in the early hours of the morning. The Lebanese Cabinet decided only yesterday to let the troops move beyond the Litani River, which is a very strategic point. It brings this all just as close to the Israeli border as they've been in nearly 40 years.

Now it's playing out very differently on the ground in terms of the media. The Lebanese state television is really playing this up. They're calling it a historic moment and a great day for Lebanon's army - really trying to rally support for this deployment. It's showing residents claiming they feel safer with the Lebanese soldiers around, while other networks are broadcasting the exact opposite - showing residents who don't think the army can protect them like Hezbollah did.

For its part, Hezbollah is doing what it said it would do. Its fighters have disappeared off the streets and its weapons are out of sight. The Lebanese government won't be looking to track down or arrest any Hezbollah fighters or try to forcibly disarm them. The information minister said last night there won't any kind of confrontation between the army troops and their brothers in Hezbollah.

MONTAGNE: And the international community is still discussing the make-up of the international force it will send. It seems that each country that has promised it would help has concerns and conditions. Is this because previous peacekeeping operations, certainly there in southern Lebanon, haven't been too successful?

TARABAY: Yes, that's right. The current UN presence on the border, which is known as UNIFIL, has been criticized in the past as being ineffectual and accused of standing by and allowing Hezbollah to operate freely on the border. And this is something the international community wants to ensure doesn't happen with this new force. They're meeting in New York at the UN headquarters.

But these first few days here on the ground will be the most telling about whether this force will succeed or not. Already there are 2,000 UN peacekeepers and the UN hopes to have another 3,500 come in, but that won't happen for at least another week. The French have said that they're willing to lead the force until at least February, but they insist they be given what they call sufficient powers as well as very clear rules of engagement. They're concerned the UN resolution doesn't do enough to address the political problems and they want to avoid a situation where they themselves have to forcibly disarm Hezbollah.

MONTAGNE: A number of Muslim countries have volunteered to send troops, but have the Israelis expressed concerns about that?

TARABAY: Yes. The Israelis have said they're not happy about countries like Malaysia and Indonesia taking part. They don't have diplomatic relations with Israel and their people are known to have anti-Israeli sentiments. And we've seen anti-Israeli demonstrations in those countries in the past, particularly in regards to the conflict the Israelis have with the Palestinian people.

MONTAGNE: And, Jamie, are there signs that things are coming back to what might be called something like normal in Lebanon? For instance, is the Beirut International Airport open yet for business?

TARABAY: We've been driving around the areas of Beirut that only a few days ago were completely deserted because people had fled the fighting. We're seeing shops open again. Restaurants are open again. People are beginning to start the big clean up here.

There's nothing official from the Lebanese government so far about the international airport formally re-opening. Its runways were bombed by Israeli warplanes last month. But today, we understand a Middle East Airlines passenger jet, which is Lebanon's national carrier, will arrive from Jordan. There's also a Royal Jordanian flight expected to land here. But we don't know if this means that the Israelis have lifted their air blockade either. Previously the airport was open only to receive emergency supplies. And Israel said it will maintain its blockades, at least the land ones, to prevent Hezbollah from re-arming.

MONTAGNE: Jamie, thanks very much.