Accessibility links
The Magic of the Human Mind Barry Gordemer was a professional magician for 15 years. He says that if people knew how he did most of my tricks, they would be thoroughly unimpressed. The real magic, he says, lies in the audience's desire to believe. 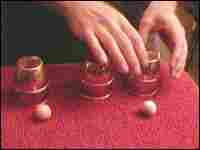 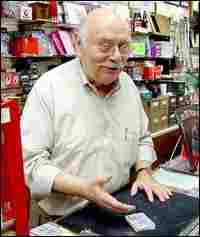 For more than 60 years, Al Cohen ran a magic shop in Washington, D.C. He decided to sell the shop about five years ago. 2001 Photo by Barry Gordermer, NPR hide caption

I was a professional magician for 15 years. I knew more tricks than you could shake a wand at. I could make things disappear, reappear and float through the air. I knew card tricks, coin tricks, and how to make a live dove materialize out of nowhere.

I certainly was no Dai Vernon or David Copperfield. In fact, if you knew how I did most of my tricks, you would be thoroughly unimpressed. As a lot of magicians like to say, "It's nothing you couldn't do for $19.95."

Certainly there are plenty of effects that call for expert sleight of hand... stuff that can take years to master. But degree of difficulty does not matter. Usually the secret behind the most mysterious tricks is very, very simple.

Dolly Parton is fond of saying, "It costs a lot of money to look this cheap." I discovered it takes a real genius to create simplicity.

One of those geniuses lives in my back yard. For more than 60 years, Al Cohen ran a magic shop in Washington, D.C. He's retired now, but at 80 years old, he still smiles like a mischievous little boy.

Cohen is a master of misdirection, the art of getting your audience to look away just as you do the toughest part of the trick. I've heard stories of a magician who distracted his audience by having an elephant walk across the stage.

Cohen takes a much simpler approach.

"For example, if I was doing a card trick, I'd ask the guy, 'Have you ever seen this one before?' He'd look up at me and say, 'No.' The moment he looked up, [and was no longer looking at my hands] that's when I'd do my move. He never saw a thing. I fooled a lot of people that way."

And Cohen didn't have to clean up after the elephant.

One of the oldest tricks in magic is the Cups and Balls. It dates back to ancient Egypt. Three tiny balls disappear and reappear under three ordinary cups. No smoke, no mirrors, no trap doors, no digital effects (computers were a tad scarce back then). The Cups and Balls relies solely on sleight of hand and misdirection... pretty easy stuff, really. But the trick is still amazing people literally thousands of years later. Talk about genius!

Over the years, the more I learned about fooling people, the more I began to believe in real magic... the magic of the human mind.

Back in my performing days, I loved to watch faces in the audience just as the trick reached the "tah-daaaaah" moment. For one instant, one nanosecond, you could see in their eyes that they actually, truly believed in magic. There'd be a moment of silence too small to measure, then applause — small at first then louder — as the sense of wonder dissolved. I'll never forget those moments. I'm convinced people want to believe in the impossible. They want miracles, no matter how small.

Al Cohen told me his favorite moment as a magician:

"I did a trick for a little boy. He was probably about 5 years old. Anyway, he looked up at me and said, 'I know how you did that.' I said, 'How?' He said, 'You used magic.' It's the best explanation I ever heard."

Barry Gordemer is a senior producer for Morning Edition.