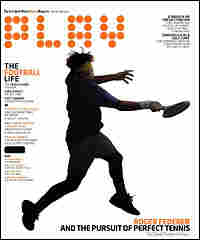 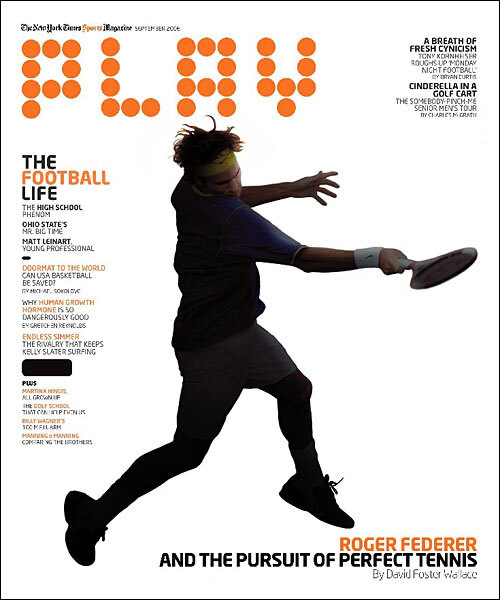 David Foster Wallace, a fiction writer and essayist who was a serious junior tennis player, has a well-documented love of the sport. His hulking novel Infinite Jest was partly set at a tennis academy, and his Esquire article about the talents of "power-baseliner" tennis pro Michael Joyce is part of the collection A Supposedly Fun Thing I'll Never Do Again.

Now, Wallace is waxing rhapsodic about the skills of the greatest tennis player alive. In this Sunday's Play magazine section of The New York Times, Wallace has a cover piece entitled "Roger Federer as Religious Experience."

The opening lines of Wallace's article appear below.

Almost anyone who loves tennis and follows the men's tour on television has, over the last few years, had what might be termed Federer Moments. These are times, as you watch the young Swiss play, when the jaw drops and eyes protrude and sounds are made that bring spouses in from other rooms to see if you're O.K. The Moments are more intense if you've played enough tennis to understand the impossibility of what you just saw him do. We've all got our examples. Here is one. It's the finals of the 2005 U.S. Open, Federer serving to Andre Agassi early in the fourth set. There's a medium-long exchange of groundstrokes, one with the distinctive butterfly shape of today's power-baseline game, Federer and Agassi yanking each other from side to side, each trying to set up the baseline winner ... until suddenly Agassi hits a hard heavy cross-court backhand that pulls Federer way out wide to his ad (=left) side, and Federer gets to it but slices the stretch backhand short, a couple feet past the service line, which of course is the sort of thing Agassi dines out on, and as Federer's scrambling to reverse and get back to center, Agassi's moving in to take the short ball on the rise, and he smacks it hard right back into the same ad corner, trying to wrong-foot Federer, which in fact he does — Federer's still near the corner but running toward the centerline, and the ball's heading to a point behind him now, where he just was, and there's no time to turn his body around, and Agassi's following the shot in to the net at an angle from the backhand side ... and what Federer now does is somehow instantly reverse thrust and sort of skip backward three or four steps, impossibly fast, to hit a forehand out of his backhand corner, all his weight moving backward, and the forehand is a topspin screamer down the line past Agassi at net, who lunges for it but the ball's past him, and it flies straight down the sideline and lands exactly in the deuce corner of Agassi's side, a winner — Federer's still dancing backward as it lands. And there's that familiar little second of shocked silence from the New York crowd before it erupts, and John McEnroe with his color man's headset on TV says (mostly to himself, it sounds like), ''How do you hit a winner from that position?'' And he's right: given Agassi's position and world-class quickness, Federer had to send that ball down a two-inch pipe of space in order to pass him, which he did, moving backwards, with no setup time and none of his weight behind the shot. It was impossible. It was like something out of The Matrix. I don't know what-all sounds were involved, but my spouse says she hurried in and there was popcorn all over the couch and I was down on one knee and my eyeballs looked like novelty-shop eyeballs.

Journalistically speaking, there is no hot news to offer you about Roger Federer. He is, at 25, the best tennis player currently alive. Maybe the best ever. Bios and profiles abound. '60 Minutes' did a feature on him just last year. Anything you want to know about Mr. Roger N.M.I. Federer -- his background, his home town of Basel, Switzerland, his parents' sane and unexploitative support of his talent, his junior tennis career, his early problems with fragility and temper, his beloved junior coach, how that coach's accidental death in 2002 both shattered and annealed Federer and helped make him what he now is, Federer's 39 career singles titles, his eight Grand Slams, his unusually steady and mature commitment to the girlfriend who travels with him (which on the men's tour is rare) and handles his affairs (which on the men's tour is unheard of), his old-school stoicism and mental toughness and good sportsmanship and evident overall decency and thoughtfulness and charitable largess — it's all just a Google search away. Knock yourself out.

This present article is more about a spectator's experience of Federer, and its context. The specific thesis here is that if you've never seen the young man play live, and then do, in person, on the sacred grass of Wimbledon, through the literally withering heat and then wind and rain of the '06 fortnight, then you are apt to have what one of the tournament's press bus drivers describes as a ''bloody near-religious experience.'' It may be tempting, at first, to hear a phrase like this as just one more of the overheated tropes that people resort to to describe the feeling of Federer Moments. But the driver's phrase turns out to be true — literally, for an instant ecstatically — though it takes some time and serious watching to see this truth emerge.