Accessibility links
Snakes on a Plane, on a Silver Screen -- Finally Snakes on a Plane famously wasn't shown to critics before opening day. Something to do with letting the fans see it first, allowing them to enjoy a purer moviegoing experience, blah blah blah.

Snakes on a Plane, on a Silver Screen -- Finally

Snakes on a Plane, on a Silver Screen — Finally 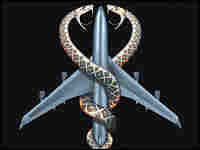 Detail from a poster for Snakes on a Plane. New Line hide caption

To download, PC users right-click and select "save target as." Mac users control-click and "save (or download) link as."

(AP) -- Snakes on a Plane famously wasn't shown to critics before opening day. Something to do with letting the fans see it first, allowing them to enjoy a purer moviegoing experience, blah blah blah.

And truly, the hype from the title alone has built to such a frenzied din - or a deafening hiss, if you will - why bother screening it? There's just no need.

Ordinarily this makes critics very cranky. But in the case of Snakes on a Plane (or "SoaP," the cutesy acronym by which it's become known) it was the perfect choice. Because this isn't the kind of movie you want to see in an intimate theater with a handful of people. This is a movie that is uniquely, ideally suited for the rowdy, crowded communal experience, the likes of which we haven't seen since The Rocky Horror Picture Show.

This is an event. It's a rare example of a film not just living up to the hype, but surpassing it. And it's the best time you'll have at the movies all summer, if not all year.

Granted, it's difficult to separate the two - the sensation of watching the film en masse and the film itself - because they're so intrinsically entwined. At a recent late-night showing, for example, a guy wearing a Big Bird mask led the packed auditorium in spirited Snakes on a Plane cheers - and this was during the trailers, before the film had even started.

So you can imagine the hysteria when Samuel L. Jackson, as FBI agent Neville Flynn, barks out the climactic line that's been well-known for weeks now. (In case you were unaware, Agent Flynn expresses his annoyance at the prodigious number of reptiles aboard this particular 747. Only he uses a really descriptive 12-letter word.)

Having said that, Snakes on a Plane does stand up on its own two, er, feet as a thrilling action flick. It accomplishes exactly what it sets out to do, and it does so in brilliant fashion. It's intense and suspenseful, scary and gory, darkly funny and sometimes giddily hysterical.

Director David R. Ellis (Cellular, Final Destination 2) and screenwriters John Heffernan, Sebastian Gutierrez and David Dalessandro faithfully work within the standards set by the fantastic disaster movies of the '70s - films like The Towering Inferno and Airport 1975 - without resorting to outright parody, which Airplane! so ingeniously mastered.

(Jackson himself had promised that Snakes on a Plane would not be so-bad-it's-good campy, that he wouldn't appear in a film like that. He is a man who doesn't mess around, and he didn't lie. The movie is indeed hilarious, but only when it intends to be.)

So you can figure out who will live and who will die just by the obligatory bits of exposition about the characters as they board the redeye heading from Honolulu to Los Angeles. The rude, condescending British guy who hates Americans is most likely a goner, for example. The two little boys flying by themselves for the first time will probably make it, as will the woman carrying a baby.

Agent Flynn has commandeered first class as he escorts surfer-dude Sean Jones (Nathan Phillips) back to Los Angeles to testify about a murder he witnessed. Gang leader Eddie Kim (Byron Lawson), who committed the bloody killing back in Hawaii (and apparently wore a white suit specifically for the occasion) wants to make sure that Sean doesn't make it across the Pacific Ocean.

So Eddie and his far-flung armada of thugs arrange to have hundreds of exotic, deadly snakes packaged up in cargo upon this particular flight - but not too securely - because, you know, an assassin couldn't just bring a gun on board and shoot the guy. An assassin couldn't even bring his own bottle of water on board if he were thirsty.

And that's part of what makes Snakes on a Plane so unexpectedly quaint. Air travel isn't the most entertaining topic these days, and it hasn't been for a long time. The film makes no political statements in that regard, though; the passengers just get on board, returning from their Hawaiian honeymoons or whatever, blissfully unaware of any potential danger. Then when the snakes come slithering down the aisles, through the bathrooms and into the cockpit, feasting on anyone in their path, it's dazzling and heart-pounding and - dare we say it? - fun.

Among the people in the path of these venomous creatures are Julianna Margulies as a flight attendant on her last trip (of course), Flex Alexander as a rapper with OCD, Rachel Blanchard as a high-maintenance blonde with a lap dog, and David Koechner as the good ol' boy pilot who's a sexual harassment lawsuit just waiting to happen.

Leading them all to safety is Jackson, who by now has honed this type of performance to both a science and an art. He makes it look so effortless as he jabs a cobra with a wine-bottle shard or spouts off some tough-talk one-liners, it's as if he isn't even acting.

When there's nobody left to fly the plane, he's the guy you want at the controls.

Snakes on a Plane, a New Line Cinema release, is rated R for language, a scene of sexuality and drug use, and intense sequences of terror and violence.

Running time: 105 minutes. Three and a half stars out of four.