A Warm Song Made from Modest Parts

A Warm Song Made from Modest Parts 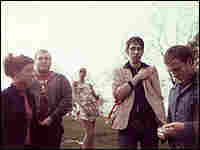 Borrowing from Boy Scout sing-alongs and school field trips, "My Antarctica" — available on a limited-edition double-EP set slated for release later this year — sounds mysterious and sometimes impenetrable, like many Page France songs. "My Antarctica / my beloved home," Nau sings, sweetly and directly. "They treat you like a dog / I'm sorry if I joined along."

Nau has gained a reputation for prolificacy, a tendency to include references to Christianity in his work, and a limited palette of sounds. But Nau converts his apparent weaknesses into strengths: His hummably straightforward songs stick in the brain, and his wonderment in the simplest of things is infectious.