Accessibility links
The Minds Behind 'Brothers of the Head' The new film Brothers of the Head tells the story of conjoined twins who become rock stars in mid-1970's England. The faux-documentary project is the work of Keith Fulton and Louis Pepe, the two directors who made Lost in La Mancha, the acclaimed documentary about Terry Gilliam's failed attempt to film, The Man Who Killed Don Quixote.

Listen
The Minds Behind 'Brothers of the Head'

The new film Brothers of the Head tells the story of conjoined twins who become rock stars in mid-1970's England. The faux-documentary project is the work of Keith Fulton and Louis Pepe, the two directors who made Lost in La Mancha, the acclaimed documentary about Terry Gilliam's failed attempt to film, The Man Who Killed Don Quixote. 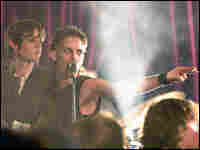 The mock documentary This is Spinal Tap played the excesses of the rock and roll business for laughs. Well, a new movie is mining the same territory with a somewhat darker story. Brothers of the Head looks and sounds like a real documentary about a British rock band from the 1970s, except that the band is fronted by a pair of conjoined twins.

A casual viewer might wonder if the Bang Bang was a real band. It wasn't, but the filmmakers do their best not to let on. They show old snapshots of the main characters as children and posters from the band's shows.

ROSE: They also concoct interviews with musicians, doctors and other eyewitnesses to the brief, outrageous career of Tom and Barry Howe.

Unidentified Man #1: Barry's lifeting his shirt. Tempting them, you know, showing them kind of where the join was.

Unidentified Man #2: Everyone in that audience thought it was a gag.

ROSE: It would be difficult to make an audience empathize with conjoined twins in your standard narrative film, says co-director Lou Pepe.

Mr. LOU PEPE (Director, Brothers of the Head): The conventional Hollywood biopic always somehow boils the artistic process down to this neat little package, where, okay, now we're going to show you the moment in the characters' childhood that defines who they are as an artist. And I think the creative process is actually a much richer and more mysterious thing.

ROSE: Brothers of the Head is based on the novel of the same name by Brian Aldiss. But the filmmakers say they felt the best way to bring fiction to the screen was to make it look like a documentary. Keith Fulton and his partner Lou Pepe are both trained as documentary filmmakers. Their previous work, Lost in La Mancha, followed director Terry Gilliam's failed attempt to film The Man Who Killed Don Quixote.

They were also inspired by such classic rock docs as DA Pennebaker's Don't Look Back and the Maysles's Brothers Give Me Shelter. Pepe says he knew the documentary form could work for a fictional subject too.

Mr. PEPE: One thing that happens in fiction films is that there's a kind of accepted pallet of techniques for how you tell a story. And documentary has, in a way, a much broader pallet of storytelling approaches. You can show a scene that's all still frames from a photo shoot or you can have a scene that's an event that's told purely through people's accounts.

And we liked the idea that we could make more of a patchwork quilt out of this story of Tom and Barry Howe with lots of different cinematic storytelling devices.

ROSE: So the band in the film is followed by a fictional documentarian, and it's this footage that provides the backbone of Brothers of the Head. Other footage comes from a fake biopic of the twins that was supposedly shot by director Ken Russell, who really made biopics about Franz Liszt and Gustav Maller, but it probably best know for his film version of The Who's Tommy. Russell makes a brief appearance in Brothers of the Head as himself, talking about why he was fascinated by the Bang Bang.

Mr. KEN RUSSELL (Director): It's really about the innocence and loss of innocence. And the exploitation of innocence always appeals to me, because, again, that happened in Tommy and it certainly began to happen with Tom and Barry.

ROSE: If the idea of conjoined twins fronting a rock band seems a little over the top, keep in mind Brothers of the Head is set in the 1970s. The era's unofficial theme song was Sex and Drugs and Rock and Roll by Ian Dury, who did little to hide the fact that he suffered from polio.

Washington Post film critic Desson Thompson, who lived in England at the time, says the film recaptures the era and all of its boozy, druggie glory.

Mr. DESSON THOMPSON (Film Critic, Washington Post): You can almost smell the stale beer as sort of taskmaster, drill sergeant of a rock and roll teacher is teaching him, you know, how to play along with The Kinks.

Unidentified Man #3: I'm gonna put a song on. Don't argue and listen. Are you ready? Yeah. We're gonna listen to this all right.

ROSE: The twins are played by real-life but not conjoined twins Luke and Harry Treadaway.

Mr. HARRY TREADAWAY (Actor): (As Barry Howe) Someone would (unintelligible).

ROSE: When they first auditioned for the roles, Luke and Harry say the film's casting agent neglected to mention they'd be joined at the ribs during shooting.

Mr. L. TREADAWAY: She told us a little bit of a half truth, as in it was about brothers and it was about music in the 70s. But she didn't mention the conjoined twin thing. But the time it came to going for a call back, we got told then and to be honest, it was just like, what the hell is this going to be like?

Mr. H. TREADAWAY: It was pretty extreme, sort of human experiment just to be six inches apart from someone's face from three months.

ROSE: Before shooting for the film even started, the Treadaway brothers and the musicians who backed them up rehearsed and actually recorded nine songs as the Bang Bang.

ROSE: The directors gave their actors freedom to depart from the script and they deliberately did not tell the camera exactly how the scenes would unfold. As a result, the camera captures the action with the shaky, spontaneous feeling of a documentary. It even follows the twins into the bathroom, where it's clearly not welcome, though director Keith Fulton says this was part of the plans.

ROSE: Ultimately, the film's approach points out just how unrevealing the documentary form can be, says film critic Desson Thompson.

Mr. THOMPSON: You kind of see passing glimpses of them, and every shot you see of them you know is either part of this documentary or films within the film that it's excerpting from. So, yeah, you are removed. And that's kind of the problem for me a little bit in the film. I really did want to get some kind of insight into the central purpose of these twins.

ROSE: But the filmmakers say denying that insight was part of the point. It contends that the twins are fundamentally unknowable except to themselves.

ROSE: The question of who's who and who does what in an artistic partnership has some resonance for Keith Fulton and Lou Pepe, who met as film students at Temple University in Philadelphia in the 1990s. What started as a professional collaboration quickly became a personal relationship, too. Lou Pepe says the two spend “way too much time together,” which may be why they were drawn to this unsettling material in the first place.

Mr. PEPE: Sometimes when conjoined twins are separated, one twin will die due to no physical reason whatsoever. It's more of an emotional, ineffable reason why the twin has died. You realize that all close personal relationships have a kind of mysterious component to them where people are bound to each other in ways that none of us fully understand.

ROSE: Even the inevitable end to the twins' career is wrapped in mystery. Like a lot of key dramatic moments in Brothers of the Head, it happens off camera.