Accessibility links
As Fissures Between Political Camps Grow, 'Tribalism' Emerges As The Word Of 2017 "The meme of the moment is to say that American politics has become 'tribal,'" linguist Geoff Nunberg says. One sign of the division is the fact that no one can agree on how to use the word. 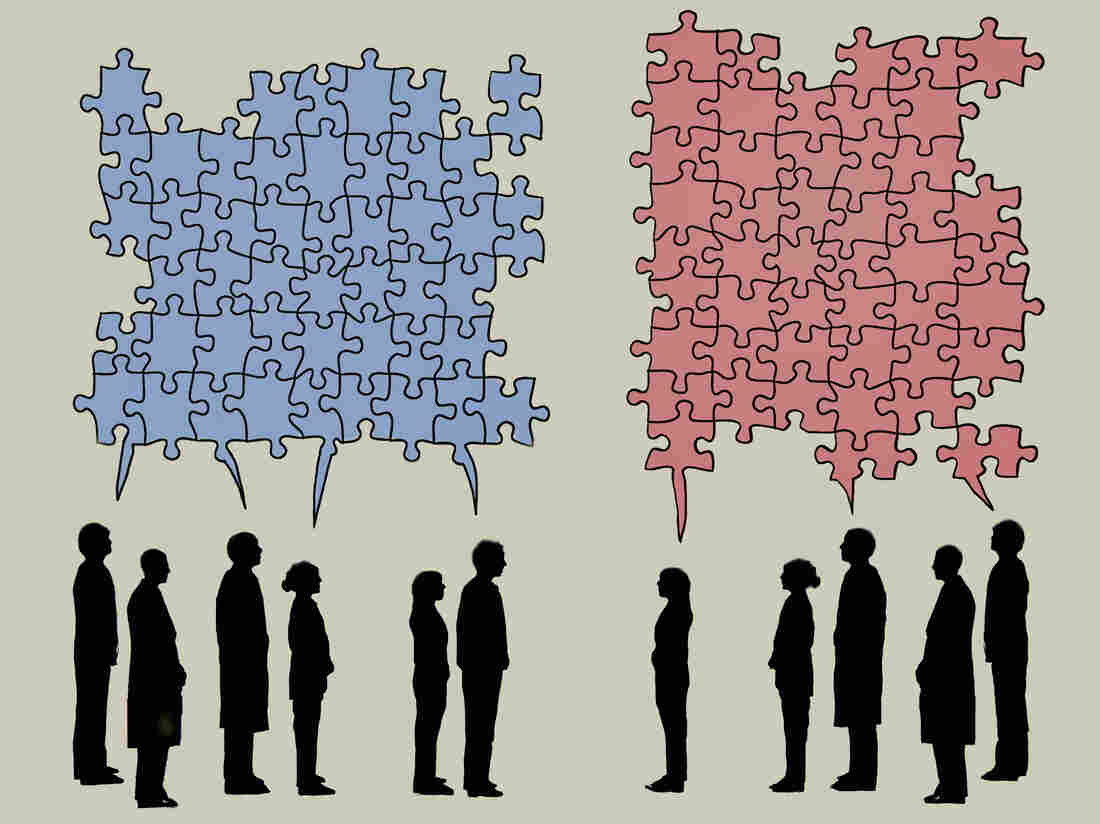 "However people map out the geography of American political tribes, they always exempt themselves and their neighbors," Geoff Nunberg says. Gary Waters/Ikon Images/Getty Images hide caption 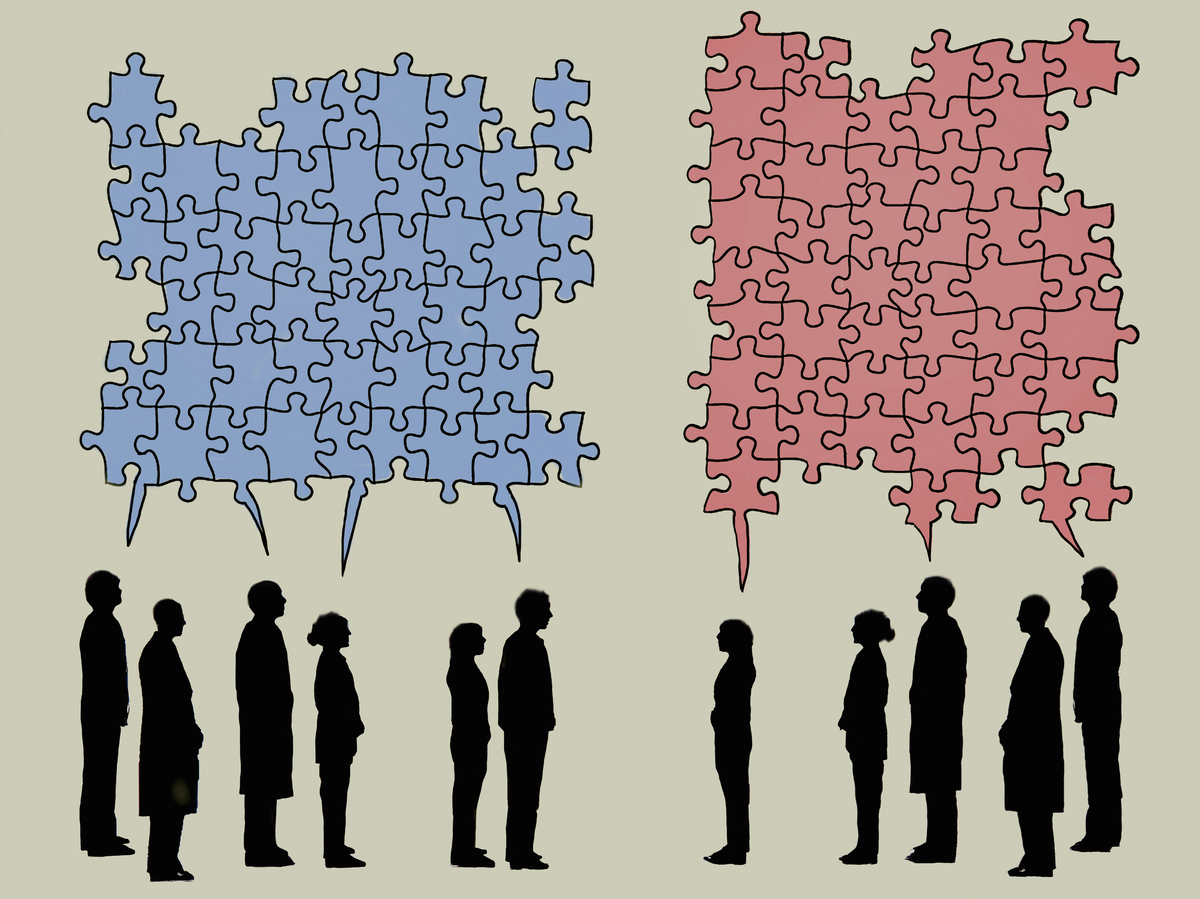 "However people map out the geography of American political tribes, they always exempt themselves and their neighbors," Geoff Nunberg says.

It's striking how many of those are the words and phrases that warring political camps have been hurling at each other across our deepening national divide. The Trump presidency didn't create that rift but it sort of made it official.

The acrimonious climate has ruined a lot of Thanksgivings, as two economists recently demonstrated. Using cellphone tracking data, they found that Americans from politically divided families spent 20 minutes less time at the holiday dinner table after the election than the year before.

Wonkish terms like "hyper-polarization" don't begin to convey that sense of unrelenting rancor. Instead, the meme of the moment is to say that American politics has become "tribal," which I'll make my word of the year.

It's not a new word even in that meaning, but in one form or another, it has become the ubiquitous diagnosis for most of our political ills. "America is Cursed with Tribal Morality"; tribalism is responsible for fake news and for our inability to confront sexual harassment. Meanwhile, people abroad raise the specter of the "new tribalism" wherever the traditional nation-state seems to be fraying at the seams, from Catalonia to Scotland.

The word "tribe" is a little problematic even in its traditional sense, as the early social group that predates the nation-state, united by kinship, language and rituals.

"Tribe" has a legal status in the U.S. and there's nothing pejorative in using it for the Chippewa or Hopi. But Indigenous people in some other parts of the world object to the word's connotations of superstition, backwardness and savagery. Organizations like UNESCO stopped using "tribe" some years ago in favor of terms like "nation" or "ethnic group."

But of course it's precisely those savage "ooga-booga" negative stereotypes that make "tribe" so evocative when you attach it to the political groups of modern societies. It suggests that their members have regressed to a more primitive social level, where they're motivated only by their bond with their own kind and their hostility to outsiders. At the limit, the story goes, they're driven purely by primal emotions of fear and rage that bubble up from the evolutionary depths of what people like to call the "lizard brain."

With the exception of a few white supremacists, most Americans think that tribalism is a bad idea, which is why the word is so often preceded by "ugly" or "toxic." Where we disagree is in actually identifying the tribes. To a lot of people, "political tribalism" suggests those red and blue family members glowering at each other over the holiday dinner table, impatient to hurry back to their bubbles. They're people whose partisan identity has become so central that it determines whom they're willing to date and what brands of pizza and coffee makers they buy, not to mention which news stories they're willing to believe.

But for others, "tribalism" is just another name for identity politics, though which identities count as tribal depends on your point of view. A Wall Street Journal editorial inveighs against what it calls the "crude political tribalism" of the groups on the left who are trying to divide Americans by race, ethnicity and gender. But the Journal gives a pass to other groups who tend to vote Republican, like white evangelicals. Yet writers on both the left and the right have said "white evangelical" has become more of tribal identity than a theological one.

The fact is that however people map out the geography of American political tribes, they always exempt themselves and their neighbors. In modern America, we don't think of our own political allegiances as tribal; we're the creatures of reason.

That gives the word an incantatory power — calling the members of a group tribal is just a way of pronouncing them impervious to rational discussion. Or as one political blogger put it, "There's no reasoning with reptile."

People use "tribal" to obliterate the differences between solidarity and blind group loyalty, between principled concern and reflexive rage, between the cerebral cortex and the brain stem.

There's virtually no phenomenon in public life that someone hasn't tried to discredit as tribal. A writer in National Review blames left tribalism for creating the myth of "rape culture"; Sen. Jeff Flake says it's political tribalism for Republicans to support Roy Moore. Business consultants argue that it's the tribalism of corporate white males that keeps women and minorities out of the executive suite, but Andrew Sullivan sees feminist tribalism behind Google's efforts to hire more women engineers. The Guardian's John Abraham writes that the Republicans' tribalism has led them to deny human-caused climate change. But according to The Wall Street Journal's Holman Jenkins, it's the tribalism of progressives that leads them to refuse to debate the question.

Who wouldn't find this maddening? People use "tribal" to obliterate the differences between solidarity and blind group loyalty, between principled concern and reflexive rage, between the cerebral cortex and the brain stem.

But this isn't surprising. If we can't see eye-to-eye on who are the political tribes and who are the forces of civilization, it's because we're fragmented into factions that deny one another's legitimacy. That's what it means to say that America has become tribal in the first place, and one sign of that is that we can't agree on how to use the word.