Accessibility links
Guster Graduates from College Band Status The three original members of the band Guster met as freshmen at Tufts University in Massachusetts, and never really quite gave up the college gig. And for their fans, that's a good thing. Their latest, critically lauded CD promises to make new fans off-campus.

More from the Guster Interview

From 'Ganging Up on the Sun' 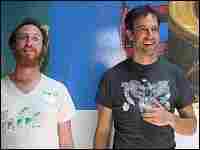 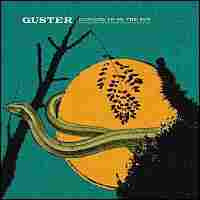 What would college be without the college band? That group that plays every fraternity party and pep rally. In the moment, the band members are on-campus celebrities — but after graduation, their stardom fades.

The band Guster might be an exception. The three original members met as freshmen at Tufts University in Massachusetts, and never really quite gave up the college gig. And for both the band and their fans, that's a good thing.

"I think starting out as a college band helps you only in the sense that you're definitely going to get better and not worse," says lead singer and guitarist Ryan Miller. "You're not in danger of starting with your best record and trying to recapture it the rest of your career.

"We've definitely grown a lot over the last 12 years. And when we listen to the stuff we wrote when were 18 years old, it sounds a bit sophomoric to us — as it should, we were all sophomores."

Their latest CD, Ganging Up on the Sun, is garnering rave reviews and good sales, and could lead to a bigger off-campus fan base.