Accessibility links
Sick of Getting Sick? Embrace Your Inner Bacteria! No one has time to be sick anymore. But will an antibiotic help or hurt? The answer depends on how your garden grows. You read that right -- a garden. Imagine your body, not as a battlefield for germs, but as a lush, tropical rainforest filled with thriving bacteria. There are more than 300 species of bacteria in your gut alone, and they make up a gorgeous garden of hard workers.

Listen
Sick of Getting Sick? Embrace Your Inner Bacteria! 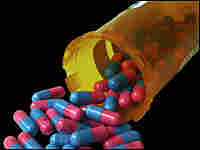 The next time you’re tempted to beg the doctor for a prescription for antibiotics, think again. iStockPhoto.com hide caption

Q: Why do you need to finish all the pills in a prescription?

A: When you skip a dose or don't finish the drug, you risk exposing the infection to just enough medicine to knock it down, but not out. Your symptoms may lessen temporarily as you squelch the weakest bacteria. But an incomplete dose permits the surviving, stronger bacteria — including, perhaps, those able pump the drug out or in other ways inactivate it — to claim vacant turf and multiply. And that could prompt the infection to roar back later, when you're weak from exhaustion or other illness.

Q: How do bacteria become resistant to antibiotics?

A: Some resistance arises naturally, but antibiotics speed up the process. For example, the prescription of antibiotics you take for a strep-throat infection may wipe out all the targeted microbes — except for a few that happen to have a gene or two that helps them to inactivate or otherwise escape the drug.

Then, a month or so later, let's say you catch a skin infection or pneumonia and take another antibiotic. The survivors from the first battle are winnowed again. This time, the only survivors are those that have the genetic ability to escape the first drug and the second. The microbes, in turn, pass that Houdini gift along to their offspring — and to their neighbors.

The more often antibiotics are used — and the more they're used incorrectly — the greater the number and variety of resistance genes in the mix. These days, some bacteria swap what are in effect large, extra cassettes of DNA loaded down with a long "playlist" of genes that allow any microbe carrying them to resist a wide variety of antibiotics.

Q: Are there more superbugs than there used to be?

A: Unfortunately, yes. Because hospitals these days tend to be filled with very sick patients who often need long courses of multiple antibiotics, the buildings have become hothouses of tough bacteria that are resistant to many of the strongest drugs.

But that's not the only place superbugs thrive. Increasingly, outbreaks of multi-drug resistant bacterial infections are arising in daycare centers, schools and homes, probably because heavy and/or improper use of the drugs in doctors' clinics, farms and feedlots, as well as in hospitals. Resistant bacteria are then spread from person to person in a handshake, a sneeze, a kiss, a shared sandwich or any other mundane encounter.

No one has time to be sick anymore, not even for a fiercely raw throat or a nasty sinus infection. But will an antibiotic help or hurt? The answer depends on how your garden grows.

You read that right -- a garden. And when it's blooming beautifully, you don't want to tamper with it.

Imagine your body, not as a battlefield for germs, but as a lush, tropical rainforest filled with maybe a quadrillion thriving plants or, in this case, bacteria.

There are more than 300 species of bacteria in your gut alone. Don't cringe. It's a gorgeous garden of hard workers.

Over there, one type of bacteria has settled into a tidy corner of your intestine and is helping to synthesize vitamin K from last night’s dinner. That’s an important blood-clotting substance. And without the help of a neighboring microbe, the broccoli you downed would be no more digestible than a fallen log.

Right this minute, in the moist, warm grottos throughout your body, encounters with friendly bacteria are teaching your immune cells how to recognize dangerous invaders. The ability to distinguish friend from foe is crucial to keeping you healthy. And by acting as a thick ground cover, these benign bacteria crowd out truly noxious germs -- salmonella, say, or dangerous versions of E. coli.

Bottom line: A lot of potentially harmful bacteria pass through you every day, but most never get a chance to dig in and make you sick.

That's how things grow when conditions are right. But sometimes the balance is upset. As any gardener will tell you, many weeds are just flowers growing in the wrong place -- dandelions in the lawn. That's true of some germs, too. A car accident, or even just a bad scrape, can allow bacteria that are generally harmless in one part of the body to sink in where they don't belong. Exhaustion or underlying illness can act as fertilizer, making it easier for the infection to take root and overwhelm you.

Sometimes the right antibiotic can save your life. But taking them willy-nilly against colds or not taking all the pills threatens our community garden. Think of insects that develop resistance to heavily used pesticides. Increasingly, you’re at risk of running into bacteria that have already survived multiple antibiotic assaults. They’re a frisky bunch. When the weakest bugs are knocked out, the stronger ones can multiply, passing along genes to offspring and neighboring microbes that enable them to escape antibiotics, too.

So, the next time you’re tempted to beg for a prescription for antibiotics, remember this: Every pill you swallow disperses pretty much everywhere. Some useful bacteria will be killed along with the bad, leaving vacant patches that invite colonization by any passing germ. Think crabgrass or Kudzu. And even if that is not a problem for basically healthy you, the antibiotic-resistant bacteria that you might spread in a cough or a kiss could be trouble for your infant, your friend getting chemo, or anybody with an immune system that’s been suppressed by age or illness.

If your doctor tells you that antibiotics won't help, don't beg. Stay home and try to keep your germs to yourself. Tell anyone who complains about your taking time off that you are tending the community garden -- for the sake of their health, as well as your own.

Deborah Franklin writes about health and science from San Francisco.