Accessibility links
U.S. Strategy and Tactics Fail to Mesh in Iraq Tom Ricks, a reporter for the Washington Post and author of the book Fiasco, says he's seen a persistent disconnect between U.S. strategy and U.S. tactics in Iraq. Ricks tells Steve Inskeep that the current U.S. strategy is being undermined by questionable tactics.

Listen
U.S. Strategy and Tactics Fail to Mesh in Iraq

Tom Ricks, a reporter for the Washington Post and author of the book Fiasco, says he's seen a persistent disconnect between U.S. strategy and U.S. tactics in Iraq. Ricks tells Steve Inskeep that the current U.S. strategy is being undermined by questionable tactics.

The Pulitzer Prize-winning correspondent Tom Ricks wrote this blunt passage. He writes: It now seems likely that history's judgment will be that the U.S. invasion of Iraq in 2003 was based on perhaps the worst war plan in American history.

That sweeping judgment came from a journalist who's covered the military for decades. It's in a book called Fiasco.

This week we've been listening to American officials describe their strategy in Iraq now, and we've contacted Tom Ricks to get one perspective on what's happening. He's at the Pentagon. Tom, welcome to the program.

INSKEEP: Before we talk about what the strategy is, how would you define strategy? Some people may not quite know what it is.

INSKEEP: So you're not just asking, am I going to send a tank over here? You're asking, what are the big objectives I want at the end of the war?

Mr. RICKS: Yes, and they're significant because tactics can be good or bad depending on what the strategy is. So if you round up all the military-age males - as they did in Iraq in the fall of 2003 - that was a good tactic if all you wanted to do was stop the fighting. It was not a good tactic if you were trying to get the Iraqi people on your side.

INSKEEP: Because, ultimately, there were people who turned against the United States because of that?

Mr. RICKS: Because about 85 percent of the tens of thousands of Iraqis rounded up were later determined to be of no intelligence value. Yet we humiliated them, stuffed them into prisons for months, (unintelligible) with hardcore al-Qaida. And eventually we released them, tending to be rather embittered about the Americans.

INSKEEP: Now, you argue that the United States at the beginning had no real strategy to reach its long-term objectives. This week, President Bush defined those objectives in a news conference for the public. Here's what he said.

President GEORGE W. BUSH: The strategy is to help the Iraqi people achieve their objectives and their dreams, which is a democratic society. That's the strategy. The tactics: now, either you say, yes it's important we stay there and get it done, or we leave. We're not leaving so long as I'm the president. That would be a huge mistake.

INSKEEP: That's the president earlier this week. Tom Ricks, is that an improvement in your view?

Mr. RICKS: It's a bit of an improvement. It's still a bit hazy. But he's basically laying out this is what we're trying to do, and we're trying to do it through training and advising the Iraqis. The criticism I heard on my most recent trip to Iraq was that tactically, that is the training of Iraqis, we've never really gotten serious about it.

INSKEEP: Wait a minute. You're saying that at the beginning of the war, great American tactics, no good strategy. Now you've got a good strategy, or a better strategy, and not good tactics?

Mr. RICKS: I think there's still been a real disconnect between strategy and tactics. Haditha is an example - you know, the killings of 24 Iraqi civilians last November is an example of harsh tactics that might have been successful in the short-term in dealing with a firefight, but were strategically unwise and they undercut the long-term strategy of trying to bring Iraqis over to our side.

INSKEEP: We've heard the president's voice. You've talked to a number of military commanders over the months and years. Do you think that they have a clear idea of what they want to achieve and how they need to achieve it?

Mr. RICKS: Not really in the long-term, I don't think. They know what they'd like, but that's not necessarily what they think they could achieve. I think really what they're doing now is trying to keep a lid on a low-level civil war to prevent it from becoming a full-blown and high intensity civil war that could easily slosh over the borders of Iraq into the whole region.

Mr. RICKS: Well, one of the big problems is we're supposed to be training and advising the Iraqis to stand them up so we could leave. The problem is we're not sure whether we're training the Iraqi army and police to lead the country or to fight a civil war between themselves.

INSKEEP: Now we also heard this week from General George Casey, the American military commander in Iraq. And one of the questions that he faced is a question of how do you judge success, particularly when the number of insurgent attacks keeps going up in Iraq year after year?

General GEORGE CASEY (U.S. Army): Violence can't be the measure of success here. Violence is something that is generated by the insurgents. The fact of the matter is that even though there are violent acts that we count, and we count them for our own purposes to get some sense, but the majority of the attacks aren't effective; it's noise. And the attacks can be one round fired from a rifle to a car bomb. And people take numbers that we track for our own purposes and extrapolate that into a measure of success, and it's just - you know, you shouldn't be put in a position where your success is judged by enemy actions.

INSKEEP: Tom Ricks, we got a number of letters from listeners after that comment by General Casey on our air earlier this week. And people basically said, what is he talking about that the amount of insurgent activity would not be a measure of whether you're making any progress or not?

INSKEEP: Where he said...

INSKEEP: ...the insurgency is in its last throes.

Mr. RICKS: ...in that just because there's an increase in violence, even an increase in American casualties, is not necessarily a bad sign. It may be because you really are engaging insurgents in one area and knocking them out of the box.

That said, I think his judgment tends to be a military one rather than a political one. And in an insurgency, you should judge everything politically. Just because an insurgent attack doesn't kill anybody doesn't mean it's not politically effective. If it succeeds in establishing that the insurgency is active in an area, if it sends a message of intimidation, those are things that are not necessarily going to inflict casualties but might achieve a goal of the insurgents nonetheless.

INSKEEP: Well, here's a question a lot of us have as we watch this war from the United States. How do we measure success or progress?

Mr. RICKS: I think it's going to take a very long time. I think the emerging U.S. strategy that, really, people haven't focused on is how do we stay there for 10 to 15 years?

And I think what I'm hearing people in the military say is, you do that by getting the U.S. casualty rate down and taking some of the $1.5 billion we're spending there every week - that's B with a boy, billion - and spend more of that on training, advising and equipping the Iraqis, and protecting the Iraqis as well, so that the police chiefs, mayors and governors aren't intimidated and their families aren't constantly threatened.

Mr. RICKS: Yeah. When I was writing my book, I'd look out the window occasionally at these kindergarteners who walked up the street everyday at 3:30 to the daycare center and I'd think one of those kids is probably going to fight and die in Iraq.

INSKEEP: That's on top of the three years that have already been fought in Iraq (unintelligible).

Mr. RICKS: That's the optimistic strategy, by the way.

Mr. RICKS: That a full-blown civil war emerges, that Iraqis get so sick of us they look for a new, more violent version of Saddam to sort of lead an anti-American jihad. Or that we have a regional war that sends oil prices spiraling and causes worldwide economic depression.

INSKEEP: Thomas E. Ricks is a reporter for The Washington Post and author of the book Fiasco. Good to talk with you.

Mr. RICKS: Thanks a lot. 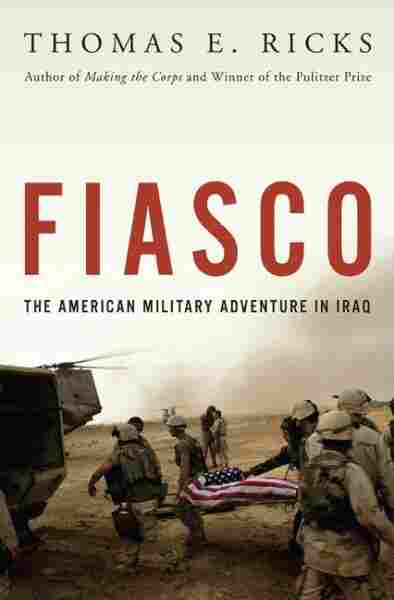 The American Military Adventure in Iraq