Accessibility links
Solar System Shrinks with Pluto's Demotion Leading astronomers declare that Pluto is no longer a planet, shrinking the solar system from nine planets to eight. Pluto was discovered in 1930. It lost its planetary status when the International Astronomical Union approved a definition for planets that Pluto fails to meet. 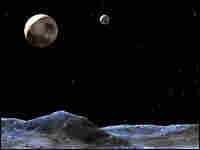 This illustration shows the Pluto system from the surface of a nearby moon-like object. Pluto is the large disk. Charon, the system's only confirmed moon, is the smaller disk to the right of Pluto. G. Bacon/NASA, ESA hide caption 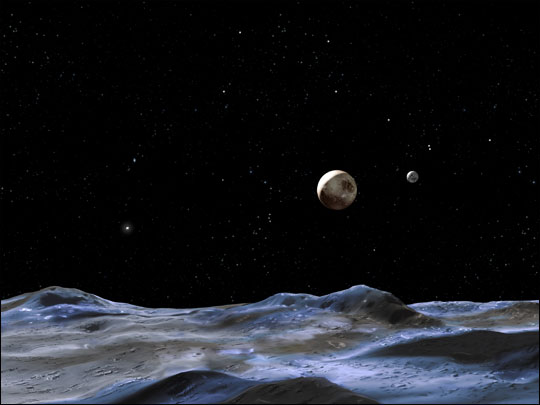 This illustration shows the Pluto system from the surface of a nearby moon-like object. Pluto is the large disk. Charon, the system's only confirmed moon, is the smaller disk to the right of Pluto.

Leading astronomers declare that Pluto is no longer a planet, shrinking the solar system from nine planets to eight.

Pluto was discovered in 1930. It lost its planetary status when the International Astronomical Union approved a definition for planets that Pluto fails to meet.

Pluto will now belong to a new category of "dwarf planets," similar to what long have been termed "minor planets."

Earlier this year NASA launched the New Horizons spacecraft on a 9 1/2 year journey to Pluto. The probe will allow scientists to better understand the distant body. 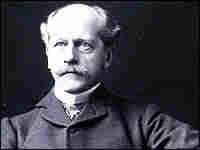