Accessibility links
A Protest Anthem That Rocks and Stomps The backbeat of Gov't Mule's "Mr. High and Mighty" is a heavy-lidded blast of '70s stomp-rock — Foghat's "Slow Ride" functions as a not-so-distant cousin. But rather than extol stoner virtues, the song expresses indignation over the doings of the craven and powerful.

A Protest Anthem That Rocks and Stomps

A Protest Anthem That Rocks and Stomps

It's easy to imagine the video treatment for "Mr. High and Mighty," by far the most rousing single in the discography of the hard-grooving rock band Gov't Mule. The backbeat may be a heavy-lidded blast of '70s stomp-rock — Foghat's "Slow Ride" functions as a not-so-distant cousin — but rather than extol stoner virtues, the lyric expresses indignation over the doings of the craven and powerful. 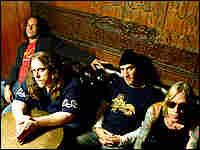 As the perpetually ornery Warren Haynes begins to sing, the song begs to be accompanied by a montage of newsmakers' photos. "Mr. High and Mighty, who are your sights set on now?" goes one line, the perfect audio counterpart to anything from "Mission Accomplished" banners to suicide bombers in training. When Haynes sings, "Buildings crumble and peasants cower at the sound of your name," no shortage of subjects spring to mind. But eventually, inevitably, just before the guitar solo, Dick Cheney would be seen curling his lip.

On and on this parade of modern-day arrogances could go. Haynes hasn't said who, if anyone in particular, he had in mind when he wrote "Mr. High and Mighty," but it doesn't matter. There is, after all, no shortage of high-and-mightiness on the loose, and hearing Haynes sing about it so forcefully serves as a kind of wake-up call, in case one was needed. A rock song can't hope to change that, but this one at least shines a little light.