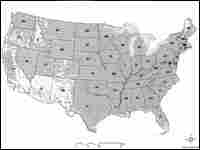 The USDA's National Agriculture Imagery Program (NAIP) is collecting aerial photographs of all the shaded areas during the summer of 2006. USDA hide caption 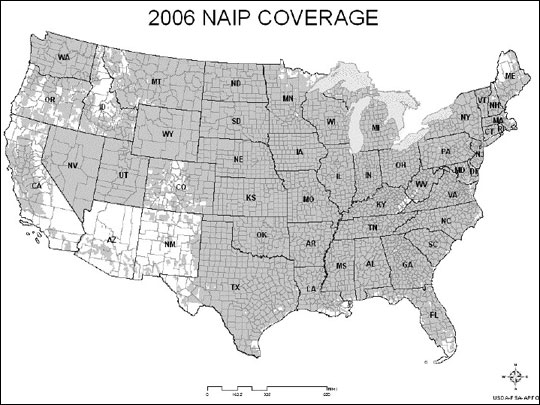 The USDA's National Agriculture Imagery Program (NAIP) is collecting aerial photographs of all the shaded areas during the summer of 2006. 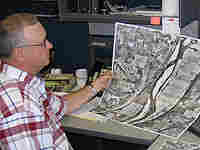 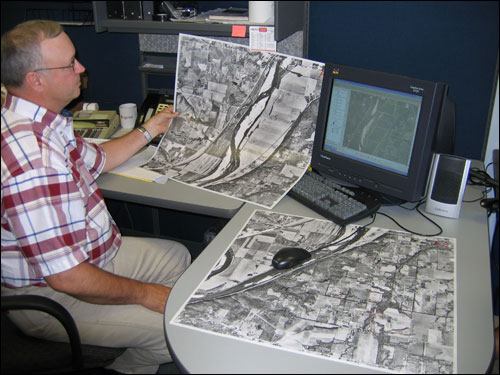 Myron Stroup, from the USDA's Farm Service Agency, looking at a traditional aerial photo on paper, while his computer shows the new digital image.

Farmers may seem like trustworthy people, but the U.S. Department of Agriculture is taking no chances. It's spending tens of millions of dollars to create an enormous computerized map of every farmer's field in America. The program is intended to make sure farmers are doing what's required to earn their government subsidies.

It's an enormous task, keeping track of those subsidies. They add up to billions of dollars each year and they go to more than half a million farmers, scattered from Maine to California. Some farmers receive payments for protecting streams and wetlands; others, for growing specific crops. In each case, the payments depend on accurate information on the amount of land involved. So the USDA has resorted to a program of overhead reconnaissance -- something akin of spy flights.

The company GE Geospatial, an aerial photography company, carries out one small piece of this program. One of its airplanes, a twin-engine Piper Navajo, spent six weeks this summer flying back and forth over eastern Kansas. A sophisticated digital camera in its belly captured pictures of the ground below.

In order to get the widest possible view, the airplane climbed to 22,000 feet, twice its normal working altitude. The cabin isn't pressurized, so pilots had to wear oxygen masks. Bob Buttram, the company's chief pilot, used to fly jets for commercial airlines, but he says this is some of the toughest flying he's ever done. "The body just doesn't take the pressure change that well," he says. "It's not uncommon for a guy to get an ear infection after a week, two weeks, of flying like that."

GE Geospatial sends those photographs to Surdex Corporation, in Chesterfield, Mo. Surdex is one of largest in a team of ten companies that's assembling this atlas of American agriculture for the USDA. This year, it will process more than a hundred thousand images, covering ten states in the Midwestern and Northwestern United States.

Craig Molander, Senior Vice President of Surdex, peers over the shoulder of one colleague, and sees an image filled with craggy mountains. "That's got to be from the Northwest somewhere. Idaho or something," he says. (It turned out to be in South Dakota.) Molander has spent much of his life looking down at the Earth from far overhead, but the pictures used to be classified top secret. Before he went to work at Surdex, he worked in military intelligence.

Molander has watched the world of overhead imagery open up in recent years. Access to images from commercial satellites has become routine; everybody now gets to look down at the world from the sky. "People got used to seeing it on the news," he says. "And now you have Microsoft and Google doing web-enabled services on it. Demand is going up and up, and people are getting accustomed to finding that data."

It's surprisingly complicated, though, to convert raw photos into the kind of seamless tableau now available through Google Earth or Microsoft's Local Live website. Pictures do lie. Photographs taken from far overhead cover an area many miles wide. Rivers or fields at the edge of each image look smaller than they should, because they're farther from the camera; Tops of mountains, being closer, look bigger than they should.

The computers at Surdex can correct those distortions, though, and the company will deliver pictures of Kansas farmland to the USDA that match, to within a few feet, the geographic dimensions of the real world. That turns the photos into a powerful tool for local USDA officials like Myron Stroup, in Olathe, Kan. "We're actually just scratching the surface of what this can do for us," he says.

Stroup works for the USDA's Farm Service Agency. He's responsible for monitoring several million dollars in federal payments every year to about 1500 farmers in two counties in Eastern Kansas. He displays one of those new aerial photos on his computer. It shows one small corner of Johnson County. But there's more here than just a photo. Laid out on top of the checkerboard of green and brown fields are red lines. They show the field boundaries. And when Stroup clicks inside the lines, he uncovers a hidden storehouse of information.

"I've selected three different fields right here," he says. "I can open the table and show the attributes -- or the data -- on those three fields. I've got the acres, and two of those fields are highly erodible land." (Farmers are required to take special precautions to reduce soil erosion on such fields.)

Another click, and the map shows what farmers promised to plant on those fields. Stroup can see whether the picture in front of him matches those promises. The other day, he says, he was looking at a field that a farmer had enrolled in the Conservation Reserve Program, or CRP. This program pays farmers to convert cropland into grassland or forest, in order to preserve soil and create more habitat for wildlife. He saw "what appeared to me like a lot of big round hay bales out there. And I thought, 'Hmm. That don't look quite right. Did this person go out and hay their CRP [field] when they didn't have authorization to do that?'" When he drove out to look, though, those round shapes turned out to be newly planted trees, which are permitted.

Stroup, and other USDA officials, don't like to call this spying on farmers, and they prefer not to talk about farmers cheating. They say it's mostly just a way to keep their records accurate; most farmers do obey the rules. The USDA's critics, such as the congressional Government Accountability Office (GAO), say the USDA is far too lenient in enforcing the rules governing federal subsidies. According to a GAO report, tens of millions of taxpayer dollars continue to flow to growers who've broken the rules by plowing up native prairie, or draining wetlands. The new system should help catch those violations.

And Scott Willbrant, a coordinator of the USDA's mapping effort for the state of Kansas, says the new digital atlas will be useful to a lot of other people, too. "This will be one of the most sought-after datasets ever," he says.

Let's say you wanted to stop soil from washing into a local river. If you combine this map with others that already exist -- such as those showing topography and soil types -- it would show you which fields might be creating the problem. It would also tell you who owns those fields so you'd know whom to call. "It's unlimited what other industry; other agencies can do with it. They probably have more use for it than we do, actually," Willbrant says.

For now, though, the USDA is keeping much of their computerized atlas confidential. Officials say they're trying to decide how much of their surveillance data they can share, without violating the privacy of American farmers.