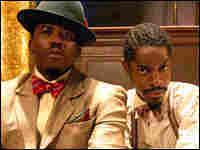 The hip-hop duo OutKast go Hollywood in their new movie Idlewild, which opens today. Nothing remarkable about that, of course — lots of hip-hop stars have made the transition to film. But OutKast is doing things a little differently. While Idlewild is, like many of the films that have featured rap singers, a showbiz saga, it is not urban contemporary. It's a period piece, set during Prohibition, and an ambitious mix of styles.

Idlewild, Ga., in the 1920s is bootleg country, so it makes sense that when a couple of dapper dudes named Percival and Rooster tell their families each night that they're going to "church," the church is a speakeasy. And since Percival and Rooster are played by Andre Benjamin and Antwan Patton, otherwise known as OutKast, it also makes sense that the speakeasy would sound more like contemporary southern rap than boogie-woogie stride piano.

Well, okay, maybe that doesn't make logical sense. But it does make entertainment sense, in the same way that crooning rock tunes did in a theoretically 19th Century Moulin Rouge. The "church" in Idlewild is sort of The Cotton Club with a mosh pit.

The girls are flappers, the guys wear zoot suits, and Rooster's uptempo raps echo the machine-gun rhythms of that period's tap-dancers. Which is clever enough, and a nice way to re-mix not just some OutKast songs, but also some gangster movie conventions. There's the bootlegger who wants to quit the business, and the thug who double crosses him. The gang war, and the innocent families that get torn apart. And of course there's romance... between a chantuese named Angel, and our shy composer-hero Percival, who — because he also works as an undertaker — stashes his music in his hearse.

Writer-director Bryan Barber is better at picturing this sort of thing than at penning dialogue for it. His script is only serviceable, but for the first hour or so, the wide-screen music video he makes of it will keep most viewers happy. The opening reel, with its swooping camera, and faded photographs leaping to life as the notes on Percival's music stand jump off the page to dance, is a real tour-de-force. Later, the plot kicks in, and you sense that making some spectacular videos for OutKast may not have fully prepared the director for his big-screen debut. Still, he's perfectly capable of goosing the plot to life with a musical interlude — say, a car chase that turns into a gun fight as Rooster and his digitally-animated hip-flask rap to each other about repenting.

Barber also protects his hip-hop stars cleverly, using two different strategies. When not singing, Big Boi is mostly required to strut and posture comically, which works nicely for him. The duo's more soulful Andre 3000 puts across Percival's moodiness largely through voiceovers, and that's effective too. You won't mistake either of them for actors, exactly, but they're fine, surrounded by Hollywood veterans like Terrence Howard and Ben Vereen.

Likewise, you won't mistake the director's work in Idlewild for that of the Busby Berkeleys of Hollywood's golden age. But then, that was equally true of Martin Scorcese's New York New York and Francis Ford Coppolla's Cotton Club. This showbiz-musical stuff has been baffling smart directors for a couple of decades now. With its scrambling of styles and its sometimes underwhelming songs, Idlewild is a bit of a mess. But Barber's music-video notions feel like the kind of kick the form has been needing.