Accessibility links
Sen. Obama Makes Lasting Impression in Kenya Sen. Barack Obama is on a five-day tour of Kenya, his ancestral homeland. On Saturday, the Illinois Democrat had a very public AIDS test and visited the village of his late father. Liane Hansen speaks with reporter David McGuffin in Nairobi.

Sen. Barack Obama is on a five-day tour of Kenya, his ancestral homeland. On Saturday, the Illinois Democrat had a very public AIDS test and visited the village of his late father. Liane Hansen speaks with reporter David McGuffin in Nairobi. 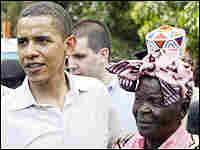 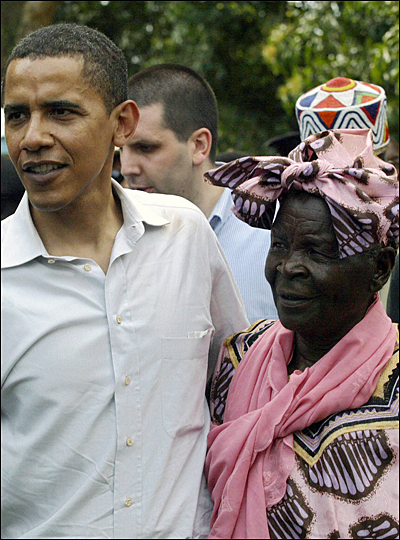 U.S. Sen. Barrack Obama greets his grandmother Sarah Obama at their rural home in Siaya, Kisumu, Kenya, Aug. 26, 2006, during his first visit in 14 years. Thousands of singing and dancing villagers thronged the dusty streets of rural, western Kenya to greet the senator he visited his father's birthplace.

Illinois Senator Barack Obama received a tremendous welcome this week in Kenya. He's on a five day visit. Thousands of people came out to see him in Nyanza Province yesterday, where he went to the east African village where his late father was born. Besides visiting with relatives, the Chicago Democrat took an AIDS test with TV cameras and hundreds of people looking on.

Reporter David McGuffin has been following the senator's visit. He's in Nairobi. David, describe the scene for us yesterday in his late father's home village.

Well, he had - the whole village, obviously, came out to see him. This is a man seen with a great deal of favor in that region. And in Kusuma(ph), the town just south of his village where he first went yesterday morning, there were literally thousands upon thousands of people out to see him. He took a public AIDS test, as you mentioned. And people were literally up trees trying to get a glimpse of this man.

The adulation I've seen has just been phenomenal. I was here in Nairobi with him on Friday. He went to lay a wreath at the U.S. embassy, the memorial for the embassy bombing here, and there were people lined up since 10:00 in the morning, people hanging out of office windows nearby, on rooftops. It's almost a pop star-like reaction he gets from the crowds here. People were shouting Obama, Obama for African president.

HANSEN: Why did he take a very public AIDS test?

McGUFFIN: Well, AIDS has certainly been one of the main topics he's been trying to hit home on this tour through Africa. And that part of Kenya has one of the highest AIDS rates in the country. And there's a real stigma too, especially amongst men, about taking AIDS tests. It's seen as a sign of weakness. Perhaps they don't want to admit that they have AIDS.

And he was very keen to break that. I mean, he said to the crowd after he took his test, he said if a senator from the United States and his wife can get tested, then anyone in this crowd, this town, this province can get tested. He's really, you know, hoping to make it a much more acceptable thing.

And when he was in South Africa too, he was very vocal on the issue of AIDS. He tackled the government there about AIDS, so - and their policies on AIDS, saying they weren't doing enough. So it is an issue he's been sort of coming back to on his African tour.

HANSEN: Has the senator addressed any other issues in Africa, in Kenya?

McGUFFIN: Certainly in Kenya, he - one of the big issues here, obviously, is corruption. There's been sort of ongoing corruption scandals involving the government here. And he met with the president, Mwai Kibaki, and that was one of the main issues he brought up. The Kenyan president had asked about more foreign - American investment into the country, and the - Senator Obama said outright, you know, you need to deal with corruption before anyone's going to trust putting money into this country. So that was certainly an issue he looked at.

He's traveling around other parts of the country. Today he's up in the northeast of Kenya, which was an area that was hit very badly by drought. There's been a three year drought up there which wiped most of the livestock, the basis of the economy up there. So he's up there looking at some projects that the U.S. government has funded, helping out the people up there. He also will be visiting a large slum in Nairobi, touching on AIDS issues as well.