Accessibility links
Will Chavez Be the Next Castro? Fidel Castro's successor in Cuba remains a source of speculation. But Venezuela's leftist President Hugo Chavez seems eager to assume Castro's role as chief goad to the United States.

Listen
Will Chavez Be the Next Castro? 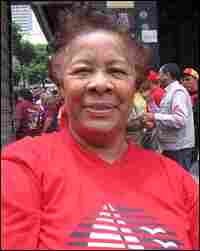 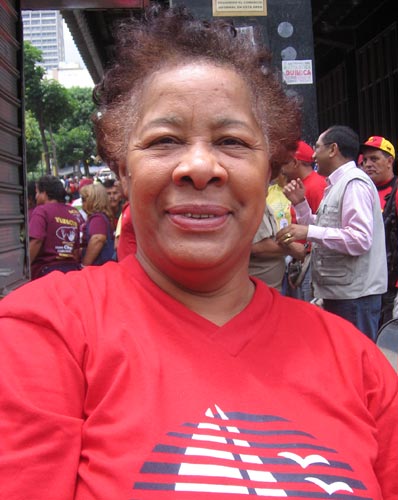 Hugo Chavez has "lifted our self-esteem," 59-year-old Meriam Naranho says while attending a rally of "Chavistas" in Caracas.

With Cuba's 80-year-old Fidel Castro recovering but infirm, who may succeed him inside Cuba remains a source of intense speculation. Outside Cuba, the man who considers Castro his mentor, Venezuela's Hugo Chavez, appears likely to assume the Cuban leader's role as the chief orator against the West. But whether Chavez can assume the mantle of beloved icon of the Latin American left, which Castro embodies, is another question.

NPR's Julie McCarthy reports on how some in South America view the self-styled Castro protégé.

If Castro has an aura of romance in Latin America from his days as a revolutionary, Chavez has the bearing of a big-hearted preacher with a loyal flock.

McCARTHY: He opens his reelection bid leading thousands gathered in the main square of Caracas in the national anthem verse: Glory to the brave people who have thrown off their yokes. Chavez frequently breaks into song, cites the Bible on justice, and charms audiences with jokes, this one at the expense of the opposition, who he says always try to fool the people.

McCARTHY: A politician, he tells them, comes to town and promises to build a school, then a factory, roads, then a bridge over the river. When an aide whispers, the town has no river, not missing a beat the politician adds, And I'll build you a river too! He entertains one minute and disciplines the next. When rally organizers toss water bottles to the crowd in the hot Caracas sun, Chavez scolds, it's disorganized, just like the bureaucracy, he says. But he reserves his true wrath for political opponents.

McCARTHY: He calls them counterrevolutionaries and says they'll roll back programs for the poor that he now pays for with Venezuela's oil profits. Chavez warns, if the opposition takes power, they will turn the country over to the imperialist United States.

(Soundbite of cheering and whooping)

McCARTHY: The crowd roars back, Yankees no, Chavez yes.

McCARTHY: Like Fidel Castro, Hugo Chavez is a tireless orator against capitalism, though Chavez is no Communist. Sixty-six-year-old Mauro Pamela(ph) expresses the view of many Venezuelans when he says their revolution is different from Cuba's. From the sidelines of the rally, Pamela says this is another moment.

McCARTHY: I consider Chavez the liberator of a bewitched world, of the drones of the human hive, he says. The president awakened a world that was asleep in so-called democracy, which was really a dictatorship of parties, he says.

I ask 59-year-old Miriam Naranjo(ph) how Chavez manages to attract so many people on a Saturday for the start of an election race he's almost certain to win.

McCARTHY: In short, she says, he's been able to raise the self esteem of people and unify us. His critics call him a divisive populist who's let corruption run rampant. But since taking office, Chavez has improved literacy, healthcare and given a voice to those who never had one.

McCARTHY: God bless the womb of the woman who gave us Chavez. A man like that, she says, is not born, implying that the Venezuelan leader is unique among men. While the zeal for Chavez borders on the religious among the poor who make up Venezuela's majority, the upper and middle classes accuse him of constructing a society of handouts rather than genuine jobs.

Still, his anti-free trade, anti-Bush rhetoric resonates among the dispossessed of Latin America. Many view Chavez as the counterweight to Washington-backed free market reforms that benefited some but caused hardship to many others. With oil wealth, Chavez has financed Argentine debt, funded other nations' infrastructure, and made cheap oil possible for Caribbean states and the urban poor of American cities.

But Cuban-born, Caracas-based writer Fausto Masso says the nations that benefit from the Chavez largesse will not necessarily stick with him over the long term.

Mr. FAUSTO MASSO (Writer): (Through translator) When Chavez gives them help, they'll vote for him, for example, to get a seat on the U.N. Security Council. But that doesn't mean it is something from the roots. It's an opportunistic exchange.

McCARTHY: Masso says that Chavez could never command the reverence that Castro has because Fidel stood at the center in the great game of the Cold War, a Soviet proxy 90 miles from U.S. shores. Masso says Chavez lacks not only Castro's historic gravitas, but his intellectual depth and austerity.

McCARTHY: Revolutions are about being ascetic, non-materialistic, Masso says. That's not here. What's happening in the world's fifth largest producer of oil, he says, is enjoyment of power.

Raul Soar(ph) is an author and commentator in Santiago, Chile. He says the United States has done more to elevate Chavez than Chavez himself.

Mr. RAUL SOAR (Author and Commentator): I think in the whole of the region there is a certain sadness that the United States' focus on Latin America is creating a new sort of Cold War in which Chavez is the bad man and he's a threat, which most of Latin Americans don't see in any way as a threat, nor even as a significant influence.

McCARTHY: But historian and University of Chile law professor Alfredo Jocelyn-Holt says his students are fascinated by what's happening in Venezuela and have gone to see it firsthand.

McCARTHY: During his recent bedside visit with the recovering Castro, Chavez told the Cuban icon that he had been working into the wee hours on a portrait of Fidel but gave up. Former Venezuelan Defense Minister Fernando Ochoa says Chavez could not capture Castro on canvas any more than he could capture his legacy.

McCARTHY: We Latin Americans, Ochoa says, may criticize Castro, but we have a weakness for him as well. In our depths we feel that he's still a young hero who confronted the United States. And this utopian idea endures in our psyche. Hugo Chavez hasn't taken that over, he says. Whatever ability the Venezuelan leader has to move events, Ochoa says, largely depends on the high price of oil. Julie McCarthy, NPR News.