Accessibility links
'Picayune' Editor on New Orleans Recovery Jed Horne, an editor at The New Orleans Times-Picayune, talks about the city's continuing struggle to start over. Also offering their observations: Patrina Peters, a lifelong resident of the Lower Ninth Ward, who is featured in Horne's book Breach of Faith, and Charlotte Lewis, who just returned to the city after 11 months.

Jed Horne, an editor at The New Orleans Times-Picayune, talks about the city's continuing struggle to start over. Also offering their observations: Patrina Peters, a lifelong resident of the Lower Ninth Ward, who is featured in Horne's book Breach of Faith, and Charlotte Lewis, who just returned to the city after 11 months. 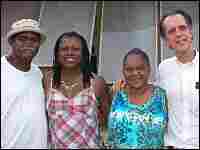 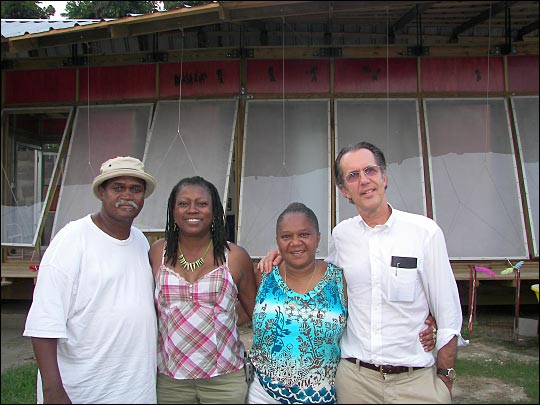 From left: Ronald and Charlotte Lewis, relocating back to New Orleans after 11 months; Patrina Peters, a lifelong city resident; and Jed Horne.

The local newspaper, The Times-Picayune, has won a number of awards for their coverage of Katrina. I understand you spoke with one of the editors, Jed Horne.

Mr. JED HORNE (Editor, The New Orleans Times-Picayune; Author, Breach of Faith): Well, I come to know Patrina through the book that I've written about the hurricane called Breach of Faith.

Patrina is the central figure in that story. She had an extraordinary story to tell. She found herself trapped on a rooftop as the storm closed in on the city, and her whole house lifted up and floated off. Patrina is an example of somebody who is very loyal to the Lower Ninth Ward.

Many generations of her family have been here as pastors, and they ran churches and still do lead congregations. Patrina's house was completely destroyed in the storm and finally was just knocked down and hauled away. Patrina is an example of somebody who is yearning to come back, dreaming of coming back, and trying to find a way back.

She was living in a house with her parents and her son and daughter. Multigenerational, they own their own home, as many people in the Lower Ninth Ward did. A popular misconception is that everybody down here was just, you know, too poor to own anything, too poor to get out. Patrina turned down a ride and stayed to look after her property; it turned out to be a dangerous thing to do.

But in that's sense, she's more typical for the Lower Ninth Ward than a lot of the popular impression that you got off to television that suggested everybody down here was just hanging on by their fingernails and had no assets in this world, no - nothing to shake a stick at, not true.

Ms. PATRINA PETERS (Resident, Lower Ninth Ward): I'm Patrina Peters. And it's just at this time a overwhelming feeling to be back here in the Ninth Ward amongst family and friends, and how much I'm yearning to get back and, at this point in time, I'm not able to. And then, we come back home, and then what's happening now? The rent is so high you can't afford it, you know, and then you go out through all kind of other processes even in trying to purchase a home. And it's just like one letdown to another letdown. But I'm trying to hold on and be strong and just put it in God's hand, but I want to come home.

CHIDEYA: But let me get to introduce yourself before you talk.

Ms. LEWIS: Right? But those are all working people. They have those children here that had schools. We need to go our schools up and running. You know, you have a half a school here, half a school there; start off with a half a school if you want to. Like you said, we're not going to be able to build the whole Ninth Ward up at one time. We're going to build one house at a time, and that's all over the city.

We're going to get two or three jobs at a time. You're not going to be able to do everything at one time. We won't be able to get all our people back home in the same day. But don't say it just because those people were living in the project that they don't deserve to come back here.

They need to make - if you're not going to rebuild a project, make some kind of affordable houses for them to come back to. You know, we need cooks, we need housekeepers, we need schoolteachers, you know? We need everything back in New Orleans.

CHIDEYA: Patrina, are you afraid that your family is going to get scattered after all these years your family's been in the Ninth Ward?

Ms. PETERS: They're already scattered. At this point in time, I can't do nothing because I can't do nothing for myself. You know, and especially for us down here in the Ninth Ward, that's been here, born and raised, and like she said, four and five generations, this is all we knew, but now we don't have no choice and it's like we can't do nothing.

CHIDEYA: Who should be helping folks get their homes back?

Ms. PETERS: The government. They're the cause of it, and I'm staying here. I've seen it firsthand, and I felt they should have had more done when we we're suffering then they did. Because we shouldn't have not lost this many people.

Ms. LEWIS: You know, you either lost your life during Katrina or you done died after Katrina. But then you're still displaced.

CHIDEYA: Jed, you wrote the book Breach of Faith that Patrina is in, and you work for the Times-Picayune. Let me ask you something very frankly. What did you get from covering Katrina and writing this book? What did you take away?

Mr. HORNE: I think we all learned about each other through this storm. For middle class whites like myself, it was to learn about the extraordinary resilience of the working poor in this city, most of whom are black. This is a majority black city.

The lesson for me is, I think, for many, many New Orleanians was the extent to which the Lower Ninth Ward had so much integrity and so much resolve as a community. The strength of the people here, for all they've been through, and the desire, the steadfastness, the loyalty to this community that is being demonstrated now, I think, came as a shock to some of us.

In truth, the Lower Ninth Ward, despite the name, is not as low as other parts of the city full of white people and upper middle class people and upper middle class black people as well. But interestingly the discussion changes politically when you're talking about the poor. And all of the sudden their future is kind of optional in the eyes of city leadership. Perhaps they should be cleared out of here and something else go in here, that type of thing.

CHIDEYA: Resolve alone cannot rebuild a community. You do need money, you do need resources. What do you see unfolding on the level of the commitment of the local, state, federal government to a neighborhood like this?

Mr. HORNE: The big delay has been in getting the federal money that was promised months ago, committed by congress months ago, but not then fully authorized until late in the spring and still hasn't reached us yet. This is the money that's meant to show the nation's love for New Orleans, and it's meant to make it possible for New Orleanians to rebuild their homes or come out whole as they try to cash out and move somewhere else.

The reality is often exactly what Patrina's family has experienced where a settlement has come through, say, from the insurance companies and it's gobbled up immediately by the mortgage holder and the family is left with nothing. They may not have a debt to the bank but neither do they have a home.

Ms. PETERS: I have faith that's unbelievable. And I do know from where I've been and where I'm at today, I trust in God, and He showed me everything is going to be all right. But even on top of that roof, sitting on top of 20-something feet of water, at one point I gave up. My mind just was about collapsing, and then I'm steady looking at all of this water, and I do know that God saved me and that child. He saved me for a purpose and a reason.

CHIDEYA: Jed, I want to talk to you a little bit more. What's your mission?

Mr. HORNE: Telling stories. That's what journalists do, that's what I do, that's what Breach of Faith does. And in those stories you see the strength and frailties and follies of this whole thing called Katrina, incredible, just staggering, reordering of your view of the world and of your sense of faith in what you can take for granted about life in a modern America.

All of us have come to understand that to the extent you rely on government, you are a fool. That the government does not have its act together, that the principle construct of the Bush years, Iraq War aside, has been the Department of Homeland Security. This was its first test since 9/11, and the results would be a laughing stock if they weren't all so deadly, if 1,500 people had not died - fully half of them well after the storm had passed.

GORDON: Coming up, a community group challenges fathers to become more active in their children's lives, and Title IX comes under attack from male athletes. We'll discuss these and other topics on our Roundtable. 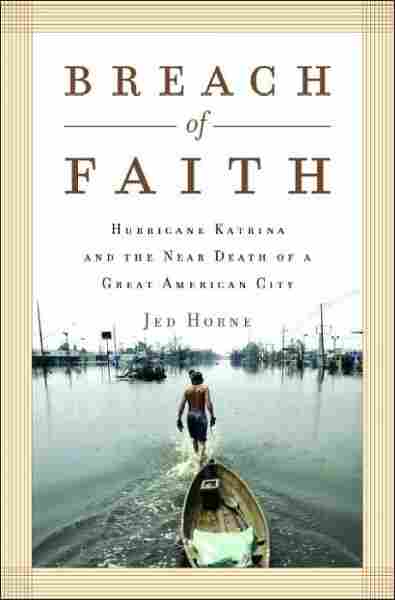 Hurricane Katrina And the Drowning of New Orleans