Accessibility links
Technology Lets Parents Track Kids' Every Move For every mother who ever told her kids she had eyes in the back of her head, modern technology can now do one better-- allowing Mom and Dad to watch their kid's every move -- even from across town. New gadgets let parents know every time their children drive too fast or visit someone they shouldn't. 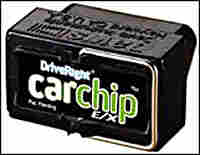 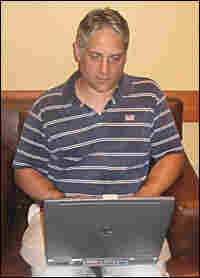 Mark Pawlick uses his laptop to track his teenage stepdaughter's whereabouts. Using GPS technology, he can pinpoint her location and driving speed at any time. Tovia Smith/NPR hide caption

For every mother who ever told her kids that she had eyes in the back of her head, modern technology can now do one better: It allows Mom and Dad to watch their kid's every move, even from across town. New gadgets can let parents know every time their children drive too fast or visit someone they shouldn't.

Mark Pawlick says he used to live in constant worry about his teenage kids -- especially his stepdaughter, Jessica.

Even at 10 years old, while growing up in a suburb north of Boston, Jessica Fairbanks was in and out of trouble. She had tried drinking and smoking, and had developed a habit of constantly lying to her parents. When it came time for her to get her driver's license, Jessica's parents were scared to death.

"We were beside ourselves," Mark Pawlick says. "There was no way I was gonna let her in the car without some way to track where she was and where she was going."

So, Mark Pawlick bought what's called a black box and hid it in Jessica's car. By using global positioning system technology to fix its location every second or so, the device is essentially an electronic tattletale. It automatically e-mails or calls Pawlick every time Jessica drives too fast, or goes somewhere she isn't supposed to.

"It was the only responsible thing we could do. We knew what we were dealing with, so we did what we had to do," Pawlick says.

Pawlick set the boundaries -- literally drawing virtual fences around the houses where Jessica isn't supposed to be hanging out, or the café where she is supposed to be working. As soon as she crosses the line, Mom and Dad know about it, and Jessica hears about it.

At first, Jessica says, she thought her parents had people spying on her. She only found out about the tracker from a friend who overheard their parents talking.

"I was … livid for the first few months," Jessica says.

But more and more teens will have to get used to the idea of "Big Mother" looking over kids' shoulders. With GPS technology getting cheaper, smaller and better, most any cell phone can be a tracking device for just a few extra dollars a month. A black box, like the one made by Alltrack that's in Jessica's car, costs a few hundred dollars, plus a monthly fee. But, it also gives parents a way to retaliate in real time.

For example, says Alltrack's Mark Allbaugh, when a teen driver is speeding, parents can remotely flash the car's light or honk the horn, until the teen slows down.

Many experts believe such tracking devices will soon be as mainstream as cell phones themselves.

"I think, over time, parents will feel if they don't have this, they're not being good parents," says Jim Katz, Director of the Rutgers University Center for Mobile Communication Studies. He says that soon, tiny cameras -- like the ones in most new cell phones -- will enable parents to literally watch over their kids 24 hours a day, seven days a week-- and even eavesdrop on their conversations. But, Katz says, all the new technology may give parents a false sense of security.

After all, the technology is not infallible, and it doesn't take kids long to figure out how to game the system. For example, if they don't want to be tracked, they can simply turn off their cell phones -- or "forget" them at a friend's home. And, a teenager can still get into trouble in someone else's car.

Psychiatrists are also weighing in on the matter, citing many reasons they think the tracking devices are a bad idea. Massachusetts General Hospital child psychiatrist Steve Shlozman says as a father, he understands parents' temptation. But, he says keeping too close an eye on kids, often backfires.

"When kids feel crowded, they tend to do things that they otherwise would not do," Shlozman says. "They take even greater risk because they have a desire to prove their independence and their individuality. There is something they need to get away with."

Shlozman says that tracking kids also undermines the trust that's critical to their development. He says kids need enough slack to learn to make good choices on their own, not just because they know Mom and Dad are watching.

"That's the moment of growth -- and you lose that if you monitor them, " Shlozman says, "They won't grow up; they'll get stuck developmentally."

But to Mark Pawlick, a tracking device is exactly what his daughter Jessica needed and deserved.

"She violated our trust and we didn't violate hers. Trust is earned, not given out," Pawlick says.

As he sees it, tracking systems can actually bolster kids' sense of independence, since Mom and Dad can monitor them from afar, instead of constantly nagging them with phone calls. Ultimately, Pawlick believes, his stepdaughter will come to appreciate what he did as a sign of how much her parents cared about keeping her safe.