Futuristic Funk That Draws on the Past

Futuristic Funk That Draws on the Past 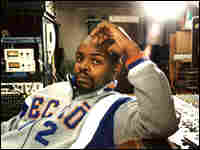 I.G. Culture remains a legend in the genre called broken-beat, much the way elder statesman George Clinton presides over funk, in the process inspiring a sort of mystical reverence. Ever since broken-beat emerged out of the U.K. drum-and-bass scene, the West London-derived music has spawned a bevy of electronic acts, which have used their genre's angular rhythms to instill new life into underground 21st-century funk. Nearly a decade later, Culture remains broken-beat's most clever producer.

Wisely, Quango doesn't try to approximate any of Hazel's scintillating guitar improvisations, which rivaled those of Jimi Hendrix, or the original version's musty undertones. Still, it superbly captures P-Funk's Afro-futuristic spirit with Pino Palladino's impossibly dense bass lines, Eska Mtungwazi and Heidi Vogel's celestial choruses and Kaidi Tatham's spaced-out keyboard riffs. It's enough to make anyone crave a funky summit between Culture and Clinton, but in the meantime, it sounds like the next best thing.