Accessibility links
Where There's Smoke, There's Flavor Planked salmon has long been a regular menu item in the Pacific Northwest, and its popularity has now spread to the lower states. There's no easier way to impress guests than to grill fish on a wooden plank, which yields a delightful, smoky sweetness. 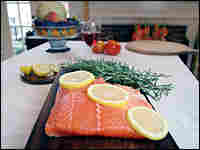 The classic is salmon cooked over an outdoor fire on a cedar plank. Scroll down for recipes. David S. Deutsch hide caption 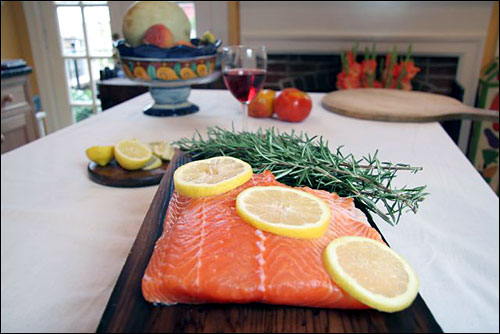 The classic is salmon cooked over an outdoor fire on a cedar plank. Scroll down for recipes. 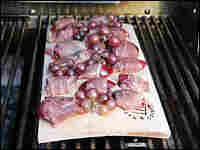 The sweetness of the plums and grapes is a nice contrast to the salty Prosciutto in this plank-grilled dish. David S. Deutsch hide caption 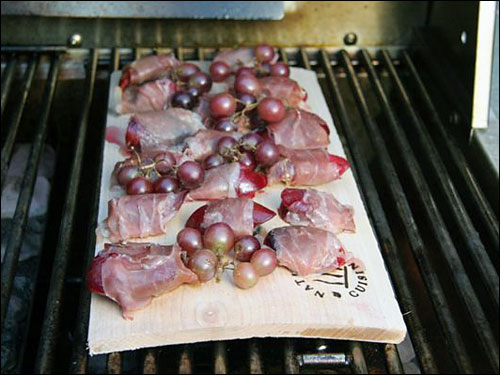 The sweetness of the plums and grapes is a nice contrast to the salty Prosciutto in this plank-grilled dish.

Bonny Wolf is contributing editor to Kitchen Window and a commentator on NPR's Weekend Edition Sunday. Her book of food essays, Talking with My Mouth Full, will be published by St. Martin's Press in November. You can find more information at her Web site, www.bonnywolf.com.

It probably never occurred to Native Americans hundreds of years ago to grill figs wrapped in Prosciutto (with a balsamic glaze). Or lamb fajitas. Or pork tenderloin with mango salsa.

These are, however, some of the contemporary recipes that use the traditional American Indian technique of planking.

Long before European settlers came ashore, Indian tribes throughout the country were roasting fish on aromatic planks of wood -- salmon in the Pacific Northwest, shad on the East Coast, whitefish in the Central Plains. They would split the fish, secure it skin-side down to a wood plank and place the plank vertically, facing the fire but outside the fire ring, to slowly cook.

Planking has been in and out of fashion in the centuries since then. Planked steak, for example, was "one of the more spectacular dishes produced in this country until World War II," writes James Beard. Planked salmon with a white sauce was a favorite of President Franklin D. Roosevelt.

The classic is salmon cooked over an outdoor fire on a cedar plank. The American Indian technique has been adapted for use in a backyard barbecue, so you don't have to bring in river stones to surround a campfire.

It is an incredibly easy way to impress guests. The wooden plank is soaked in water and toasted on the grill. The fish is placed on top of the plank, and the grill covered. The fish doesn't even have to be turned. The result is meat that absorbs a smoky, sweetness from the wood and stays extremely moist.

Planked fish and other foods can be roasted in the oven, but it is on the grill where the magic happens. And the whole neighborhood will thank you for the aromatic night air.

Planked salmon has been a regular menu item in the Pacific Northwest for years, and its popularity has now spread to the lower states.

Many kitchenware and grilling stores carry cooking planks in a variety of woods -- cedar, alder, maple, hickory, oak, mesquite and apple. While each wood has its own distinct flavor, cedar is the most commonly used.

Planks are 1/2- to 1 inch thick, 12 to 14 inches long and about 6 inches wide. They also are available on the Internet. You can make your own plank with wood from a lumberyard, but it must be untreated wood. Avoid any resinous woods such as pine and birch.

Contemporary planking has gone far beyond the fish and game cooked by Native Americans. There are a number of cookbooks on how to cook anything on a plank, from appetizers to desserts. Plums wrapped in Prosciutto, all kinds of pizza, vegetable side dishes and even dessert can be cooked on a wooden plank. Imagine a banana split made with smoky, caramelized bananas.

Planked fish can be as simple or as complicated as you like. There are prepared rubs and long lists of ingredients. Just keep in mind that the wood is the primary spice, just as it has been for centuries.

For a quick and easy planked salmon, lay a salmon fillet, skin side down, on a pre-soaked, toasted plank and season with olive oil, lemon juice, white wine, salt and pepper. For a little extra flavor, lay the salmon on a bed of fresh herbs. Place the plank on the grill, close the cover and cook until the fish flakes easily. 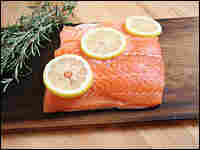 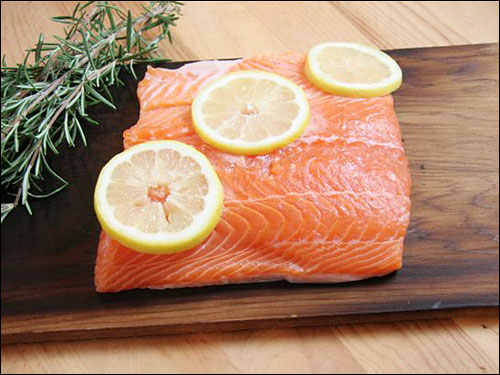 This recipe is adapted from the instructions that came with a four-pack of Chinook Cedar Grilling Planks from Seattle.

Combine all ingredients but salmon and lemon juice. Whisk and set aside.

Place salmon, skin side down, on pre-soaked, preheated plank. Place on grill and cover. Cook 10 to 15 minutes, or until done.

Simmer marinade in a small saucepan until reduced by half. Remove from heat and add lemon juice. Drizzle over salmon before serving. 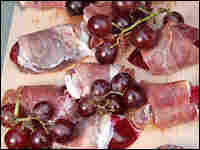 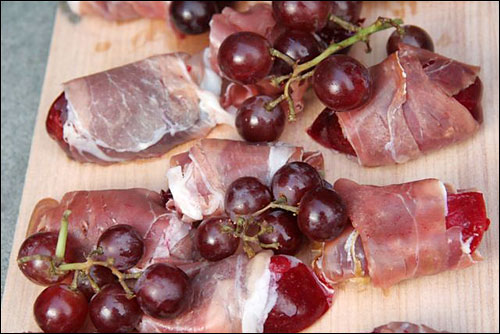 The sweetness of the plums and grapes is a nice contrast to the salty Prosciutto in this recipe from the booklet, "Sensational Smoke," from Nature's Cuisine grilling planks. Use firm, ripe plums. Ripe nectarines, peaches or melon wedges may be substituted for plums. An alder plank is recommended, although any plank will work.

Wrap each wedge of plum with a slice of Prosciutto. Place wrapped plums and grape clusters on hot plank. Cover and grill for 8 to 10 minutes, or until fruit is hot and Prosciutto is crisp. Serve warm with a selection of cheeses and breads.

As the first apples come to market, this dish can be a good late-summer, early-fall dessert. This recipe is adapted from Nature's Cuisine's "Sensational Smoke." If reusing a plank to grill apples after plank-roasting fish or meat on a charcoal grill, add coals to the grill and allow plank to burn off any remaining cooking juices.

Pulverize almonds by hand or in a food processor.

Mix butter, sugar, ginger and almonds with a fork until well blended. Spoon filling into center of each apple half. Place apples, stuffed side up, on hot plank. Cover grill and cook until tender, 20 to 40 minutes. Serve apples warm, drizzled with caramel sauce that's been heated in the microwave, and a scoop of ice cream, if desired.