Accessibility links
Grocery-Cart TV for Kids of Shoppers A New Zealand firm is betting on a U.S. market for a shopping cart that lets young children watch videos while their parents shop. Shaped like a car, the Cabco cart rents for $1, part of which goes to retailers like Wal-Mart and Publix, who are testing their popularity. Child-development experts are wary, but Cabco says offering customers the carts can add as much as $100,000 to a store's receipts.

A New Zealand firm is betting on a U.S. market for a shopping cart that lets young children watch videos while their parents shop. Shaped like a car, the Cabco cart rents for $1, part of which goes to retailers like Wal-Mart and Publix, who are testing their popularity. Child-development experts are wary, but Cabco says offering customers the carts can add as much as $100,000 to a store's receipts. 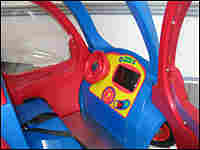 The TV Kart, a grocery cart with television for the toddler crowd, is being test-marketed at an Atlanta grocery store. Kathy Lohr, NPR hide caption

Grocery carts complete with television screens for children to watch have hit Atlanta and other areas. An Auckland, New Zealand, company called Cabco came up with the idea and has sold it to Wal-Mart in three states.

The large, brightly colored plastic shopping carts shaped like a car are available just as you walk inside five supermarkets in the north Atlanta suburbs. They're parked on a black mat. Parents must insert $1 into a square box like a vending machine to rent the carts. When small children walk into the store, they're instantly drawn to this new attraction.

Ms. KIM YEATS(ph) (Shopper, Alpharetta, Georgia): I have to get the dollar.

LOHR: Kim Yeats rushes off with three young blonde girls trailing behind her. She returns with a dollar and several smiles.

Ms. YEATS: They're very excited. It is working, and they're happy, and now we can get some shopping done.

LOHR: Yeats' two smallest girls, 3 and 5 years old, have climbed inside the TV cart and are already watching the video screen. Parents have three programs to choose from if all the carts available - Barney, The Wiggles and Bob the Builder. Yeats, who has used the cart several times, says it has made a big change in her grocery shopping.

Ms. YEATS: Nobody wants to grab everything off the shelves. We can just sit and watch TV while mom just shops. Mom shops alone now.

LOHR: Another shopper, Stanley Bleecher(ph), brings in his 2-year-old grandson, Liam. He's visiting from Miami, but his daughter told him all about the new TV carts, and he's anxious to give them a try.

Mr. STANLEY BLEECHER (Shopper, Alpharetta, Georgia): Okay, I see it maneuvers very well, and I haven't seen too many of these particular vehicles around, certainly not where we come from in Miami.

LOHR: Do you think it's a good idea?

Mr. BLEECHER: I think so, yeah. Let's put it this way, he's quiet in there. That's the best idea in the world.

LOHR: The public supermarket chain began testing the carts here about six weeks ago. According to the Web site of the company which provides the carts, each one could bring in up to $20,000 in additional sales a year for a store. Spokeswoman Brenda Reed says they're extremely popular.

Ms. BRENDA REED (Spokeswoman, Cabco): You know, if you could think back to when you were just a little kid, coming to a grocery store is exciting anyway. So now you get to come to the grocery store, be in this kind of environment, as well as watch your favorite cartoon. How good does it get?

LOHR: But not everyone is excited about this idea. Susan Lynn is a psychologist at Harvard Medical School.

Ms. SUSAN LYNN (Harvard Medical School): Do we really want to raise a generation of children who are either anxious or bored unless they're in front of a screen?

LOHR: Lynn says parents are losing the opportunity to interact with their children, to teach them about colors and numbers, even about food and nutrition. And Lynn says children are being deprived of interacting with the world and are learning to depend more and more on screens.

Ms. LYNN: This isn't just happening in grocery stores. If they go to the dentist, there's screen media in the waiting room. We, you know, have screens in the back of minivans. We have personalized DVD players for toddlers. We have baby videos, and parents are encouraged to hand cell phones to babies to distract them or to soothe them.

LOHR: Public spokeswoman Brenda Reed says it's not about ignoring children, but about providing choices to parents. The Southeastern grocery chain will wait a few more weeks until the end of the test period to decide whether to roll out the TV carts for more widespread use.