Accessibility links
Beslan Timeline: How the School Siege Unfolded Read a timeline of the three-day school siege in Beslan, Russia, in September 2004. 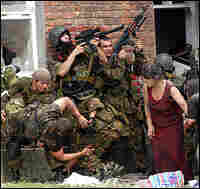 A Russian special forces soldier, left, carries an injured colleague out of a window as other soldiers and women take cover outside the school, Sept. 3, 2004. Yuri Tutov/AFP/Getty Images hide caption 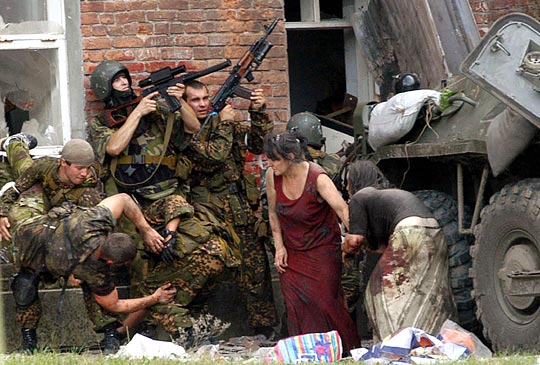 A Russian special forces soldier, left, carries an injured colleague out of a window as other soldiers and women take cover outside the school, Sept. 3, 2004. 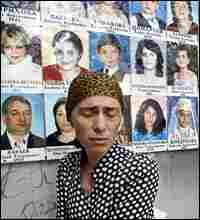 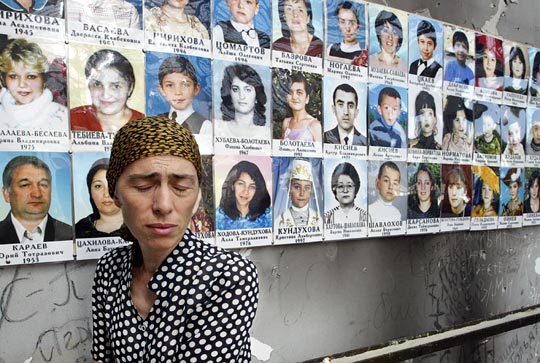 A woman cries in the Beslan school gymnasium where siege victims' photos hang on the wall, Aug. 30, 2006.

In 1994, soon after the breakup of the Soviet Union, the small, Muslim republic of Chechnya -- located in the far south of Russia -- launched a separatist war against Russia. After a brief cessation in fighting from 1996 to 1999, the conflict resumed and grew much more brutal.

Chechen militants employed violent tactics -- assassinations, suicide bombings, and hostage-taking operations, such as the 2002 theater siege in Moscow that claimed the lives of more than 100 people after Russian special forces pumped poisonous gas into the building.

The Chechen militants upped the ante two years later in Beslan -- this time they took children hostage. Below is a timeline of the three-day siege:

Morning: Students and parents gather in the courtyard of School No. 1 in Beslan, Russia, for an assembly honoring the "Day of Knowledge," or the first day of school. Shots are heard in the courtyard. Masked, armed militants round up more than 1,200 children, parents, grandparents and teachers into the school's gym.

Militants bark out rules: No cell phones, no talking without permission. Militants unpack bombs and order older male students to help them hang the bombs from the ceiling and basketball hoops and string other bombs along the floor.

Outside the school, throngs of townspeople and hostages' relatives gather. Soldiers form a cordon around the school.

Afternoon: Two small groups of male hostages are executed by militants. Officials tell reporters the terrorists have made no demands. They say there are only 120 hostages inside the school.

A hostage brings a note outside with militants' demands -- chief among them that Russian troops leave Chechnya.

Morning: Officials say there are 354 hostages inside the school -- and that militants have made no demands. The militants become more cruel to the hostages. They deny hostages water and trips to the bathroom.

Afternoon: The militants become visibly happy. Ruslan Aushev, the former president of neighboring republic of Ingushetia, enters the school. He exits with a list of demands and a letter from Chechen rebel leader Shamil Basayev, addressed to Russian President Vladimir Putin. The demands include withdrawing Russian troops from Chechnya. Militants also but promise a peaceful agreement. Aushev takes 11 mothers and 15 babies out of the school.

Morning: Conditions inside the gym are becoming unbearable. It's the hostages' third day without food, and second day without water.

Afternoon: Townspeople and relatives of the hostages gather around cars to listen to news on the radio. Just after 1 p.m., two explosions rock the school. Children scramble from the school, bloodied and dirty and wearing little more than underwear. Militants fire from inside. Soldiers and vigilantes fire back. The roof of the gym catches fire. Tanks, helicopters and armed vehicles move into position.

About 20 to 30 hostages who survived the first blasts but remained in the school are herded to the school cafeteria, where militants are waging a full-scale battle with soldiers outside. Soldiers fire tanks, militants fire rocket-propelled grenades. Militants order adult hostages to put children in the windows.

Russian special forces pry the grating from a window to the cafeteria. Hostages who survived the cafeteria battle are saved.

Night: The final shots are fired. The bodies of dead hostages and militants are spread out on the lawn. In all 331 hostages and Russian soldiers and 31 militants died. One militant is captured alive.