Accessibility links
What Is Islamofascism? Robert Paxton, author of The Anatomy of Fascism, discusses the use and meaning of a term that has come into favor with some commentators: Islamofacism. Is it an accurate description of any group, or is it a label to be avoided?

Listen
What Is Islamofascism?

Robert Paxton, author of The Anatomy of Fascism, discusses the use and meaning of a term that has come into favor with some commentators: Islamofacism. Is it an accurate description of any group, or is it a label to be avoided?

This is TALK OF THE NATION. I'm Neal Conan in Washington, and here are the headlines from some of the other stories we're following here today at NPR News.

Iran's president refused to compromise as a U.N. deadline for his country to stop enriching uranium arrived today. Mahmoud Ahmadinejad said Tehran will not bullied into giving up its right to nuclear technology. President Bush says, quote, there must be consequences for Tehran's defiance.

And lack of sleep may have contributed to the deadly Comair plane crash in Kentucky last weekend. The lone air traffic controller at the Lexington airport at the time of the crash had apparently slept for only two hours before working an overnight shift.

You can hear details of those stories and of course much more later today on ALL THINGS CONSIDERED.

Tomorrow it's SCIENCE FRIDAY and Ira Flatow will be here with a look at genetic tests you can do at home, and to ask should you trust your health to a home test kit? Plus science and technology do-it-yourself projects for the long weekend. That's tomorrow on TALK OF THE NATION: SCIENCE FRIDAY.

In a few minutes, as the dog days of summer come to an end, where is Washington? But right now the U.S. war of words.

Earlier this month, shortly after British police foiled a plot to blow up aircraft over the Atlantic Ocean, President Bush stepped off Air Force One in Green Bay, Wisconsin to make a statement:

President GEORGE W. BUSH: The recent arrests that our fellow citizens are now learning about are a stark reminder that this nation is at war with Islamic fascists...

CONAN: It was hardly the first time that the word fascism was used to described Islamic extremists, but it does seem to be popping up more often of late. Clearly the point is to cast the war on terror in stark terms, but is it accurate to use the word fascist?

We turn now to Robert Paxton. He's an emeritus professor of Columbia University and the author of Anatomy of Fascism. He joins us by phone from his home in New York City. Thanks very much for being with us today.

CONAN: I wonder, have you noticed the increased use of this terminology, Islamofascism?

CONAN: Hard to miss. And I know you've done an extensive study on the history of fascism. Is this appropriate usage?

Prof. PAXTON: Well, not in my opinion. I don't think it's appropriate usage. It seems to me, looking historically at the fascist regimes we saw in the 1920s and 30s, those were democracies, often young democracies that failed or got into difficulty and the populations turned away to dictatorship and accepted limitations on their freedom, thinking it would make their nations stronger.

And these were regimes that were based on states and made states stronger. What's happening with Hezbollah and movements like that is a religious fundamentalism, and it has nothing to do with the failure of democracy because it comes out of societies that haven't really experienced democracy for the most part.

And they're not - they're certainly not working through states. Most of the Islamic fundamentalists have contempt and hatred for the existing Middle Eastern states like Saudi Arabia or Egypt or Jordan that are in the hands of conservatives. And so it's outside of states.

CONAN: And as - what is it? I know you, to some degree, defined it in that answer, but what is it to you that defines fascism?

Prof. PAXTON: Well, the fascisms, the classic fascism in the - fascisms of the 1920s and ‘30s were popular movements of nationalist revival that wanted to use a populist dictatorship to make their countries stronger. These were often wounded countries. They had been defeated in war. They had been through a terrible depression, or they were divided. Or they were under, they thought, the threat of a revolution. And this was a way to revive these states and make them powerful, unified, and get rid of the foreign elements inside. There's a kind of a nationalist revival tone to it.

CONAN: And as I'm sure you know far better than I, the term fascist has been thrown around quite a bit after 1945 as well. And again, to you mind does it - is it a useful word, or is just a sort of blanket metaphor for people we really don't like and really disagree with?

Prof. PAXTON: well, I wrote my book partly to try make it harder to throw around this term fascism as an epithet. Fascism has been used in every direction and against everyone one doesn't like. It's the ultimate swear word, and it usually makes understanding harder and not easier. It seemed to me that the word should be used for those precise historical movements that resembled Mussolini's dictatorship and Hitler's dictatorship and some of their allies and supporters in Europe.

CONAN: And indeed the fascist states, the classical fascist states that you talked of, Italy and Germany in the ‘20s, ‘30s, and ‘40s - there were few religious overtones in Germany.

Prof. PAXTON: Well, Hitler liked to use religious language, but he and particularly some of his advisers like Himmler were anti-religious. Hitler personally was certainly anti-clerical, and his religion was the race. He liked to use religious language, and he certainly wanted the believers of Germany to be on his side. But it was - many of his supports and advisers like Heinrich Himmler were out-and-out atheists, and Mussolini was certainly an atheist. These were not religious movements, and they didn't want to share power with a church.

There was certainly an irreligious or even anti-religious tone about both of them, although they courted the church for pragmatic, political reasons.

CONAN: Is the term also misused, in your opinion, by President Bush's critics, some of whom call his administration fascist?

Prof. PAXTON: Well, that makes me laugh. Of course when you say that we're under threat and therefore can't have personal - we must abridge our personal liberties to some degree, that's a step in the fascist direction. But the fascists subordinated the individuals to the state. They subordinated businessmen to the state, and this Bush administration is certainly not doing that. It's a much more of a kind of oligarchical authoritarianism that he's been pointing toward and not at all like fascism. I think that's also abuse of the language.

Prof. PAXTON: Well, it can be very nasty, but it's not the same.

CONAN: I wonder, do you think that there might be a better phrase to describe Islamic extremists, too?

CONAN: I think if we're looking for a phrase-maker, we may want to go elsewhere.

CONAN: But thank you for your historical perspective.

CONAN: Robert Paxton is author of Anatomy of Fascism, an emeritus professor of history at Columbia University who joined us today by phone from his home in New York City. Coming up next, the summer hiatus from the nation's capital is almost over. Where did everybody go? 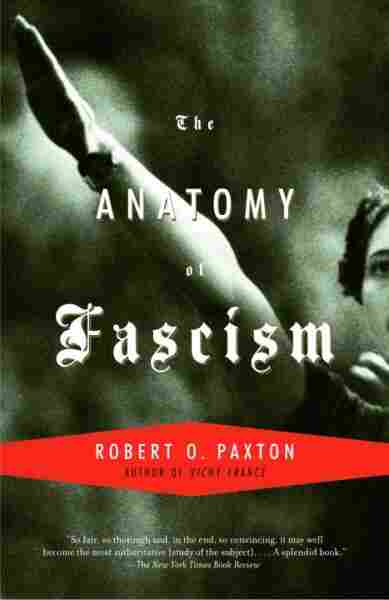 The Anatomy Of Fascism