Accessibility links
Daniel Schorr: 90 Years In A Newsworthy Life Legendary journalist Daniel Schorr, NPR senior news analyst, is celebrating his 90th birthday. He recalls some of his earliest exploits in journalism: from his first scoop as a 12-year-old to how he became a news reporter instead of a music critic. 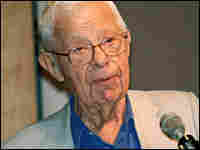 When he does it at age 90, we say, "That's Daniel Schorr." The NPR senior news analyst is celebrating his 90th birthday.

Schorr was born in New York on Aug. 31, 1916, the son of immigrants from Belarus. His father died when Schorr was 5.

He recalls he was a "fat kid," and he believes that the insecurity that he felt then had an important effect on his career as a journalist.

"I used to be so intent on getting the story," he says. "I was aware that a lot of people thought I was a little impolite in the way that I constantly strove to get the scoop, the story. Even if I was fat, they couldn't ignore me because I got the story."

Over the past few weeks, Schorr has recorded interviews about his career: in post-war Holland, in Kruchschev's Moscow, in divided Germany, in Richard Nixon's Washington.

But some of the very best are the oldest ones.

Schorr recalls his first scoop, at age 12. He reported on a suicide in his building -- and got paid $5 for his story, published in the local Bronx Home News.