Accessibility links
Da HipHop Raskalz, Kickin' It Grade School Da HipHop Raskalz are grade-school students in Harlem who make their own kind of music... much of it about candy. Their producer is an acclaimed classical musician with a rather unusual day job. 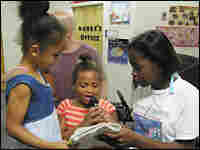 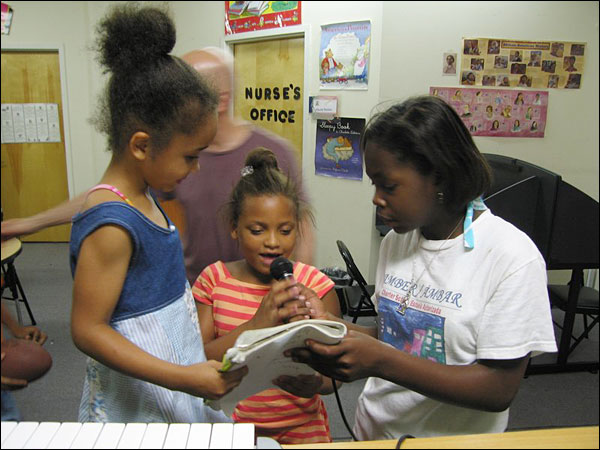 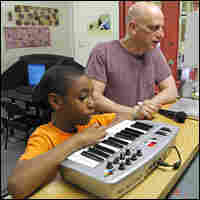 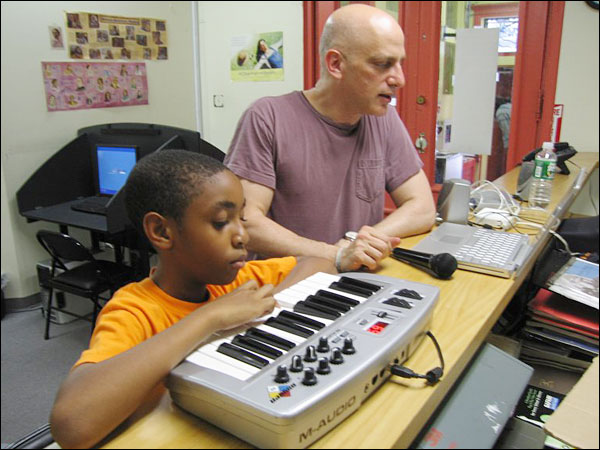 Saivon Daniel, 9, works with Dave Soldier on a track.

Most mainstream hip-hop artists rap about money, sex and other adult preoccupations. However, the MCs of Da HipHop Raskalz are spitting rhymes of a different sort, about dinosaurs, fractions -- and, most of all, candy.

The Raskalz are grade-school students in East Harlem, and their producer is an acclaimed classical musician. Dave Soldier has set up a portable studio in the library of the Amber Charter School, where he works with four kids at a time, ranging in age from 5 to 10.

The kids tell Soldier what to program into the drum machine, come up with little melodies on his portable keyboard and handle the vocals. They record for about two hours before Soldier takes the material back to his apartment in Tribeca, where he edits and mixes a final cut.

Working at the Amber Charter School is an unusual day job for Soldier, an accomplished violinist and composer who founded the Soldier String Quartet. He has composed chamber music, written string arrangements for David Byrne, and played with Guided by Voices. He also co-founded a rock band with former Velvet Underground drummer Moe Tucker called the Kropotkins.

The Raskalz project started two years ago, when a friend asked him to teach an after-school music class. Soldier brought salsa instruments, but changed his plans when he found out the kids were more interested in hip-hop. Soldier says his latest collaborators come up with ideas he never could.

"They’re making up stuff for the first time, and they’re doing it two or three of them together, all with the same words," he says. "That’s amazing. Adults can’t do that anymore."

At the moment, Dave Soldier is putting the final touches on Da HipHop Raskalz' CD, which comes out later this month, and a double CD of his chamber music.