Accessibility links
Seven Novels and Why They 'Matter' Columbia professor Edward Mendelson's book The Things That Matter explores how seven novels by women writers tell us about the stages of life.

Listen
Seven Novels and Why They 'Matter'

Columbia professor Edward Mendelson's book The Things That Matter explores how seven novels by women writers tell us about the stages of life. 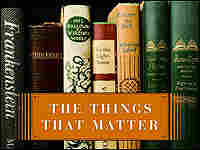 A lot of us have grown up with a form of literary criticism that can resemble detective work. Is Melville's great white whale the spread of colonialism? Is Mary Shelley's Frankenstein a denunciation of patriarchy? Edward Mendelson, a professor of English and comparative literature at Columbia University, is considered to be somewhat out of step with his profession. He believes that literature is about life, our lives.

In his new book, The Things That Matter, he looks at seven classic 19th and 20th century English novels including Frankenstein, Mrs. Dalloway, and Wuthering Heights, and examines what they may have to impart about the stages of life. Edward Mendelson joins us from our studios in New York. Thanks very much for being with us.

SIMON: Let's review what seven books you're talking about here. Frankenstein by Mary Shelley, and of course George Elliott's Middlemarch.

Prof. MENDELSON: And two by the Bronte sisters. Wuthering Heights by Emily Bronte and Jane Eyre by Charlotte Bronte, and then three by Virginia Woolf: Mrs. Dalloway, To the Lighthouse, and Between the Acts.

Prof. MENDELSON: Part of the point here is that I think if a student wants to think in terms of a category, they're basically accepting something very limiting about themselves. The idea that because I'm a category, the book doesn't talk to me, as I said in the introduction, these books were written towards - for a reader. There's a wonderful review of Charlotte Bronte's second published novel, Shirley, by a male reviewer who said, I started reading Jane Eyre very skeptically. He said, but I found myself unable to put it down, and at midnight I was on the moors with Jane Eyre and at 4 A.M. I married Mr. Rochester.

And in other words, he's - he is reading it as an I. There's a wonderful line by Alden in a notebook which he never printed in which he says, in all languages, or in all European languages, the first and second persons have no gender.

SIMON: The book he used to talk about childhood is Wuthering Heights by Emily Bronte.

Prof. MENDELSON: I'm not sure that Emily Bronte got childhood right in thinking that childhood was a time of unity and sympathy. I remember being startled by a teacher who said, I remember childhood as a time of terror and loneliness and confusion. And I thought, I can recognize that. But there's a very large movement, a very large intellectual and emotional movement in the 19th and 20th century, to treat childhood as innocent and whole and complete. And certainly Emily Bronte believed that thoroughly.

And for her Heathcliff and Catherine had this unity in childhood. They wear the same clothes, they walk around under the same cloak. And once they've been separated by puberty, they are desperate to get back together again. And Heathcliff is probably the only one of the male villainous characters who seems utterly uninterested in having a sexual relationship with anyone, possibly even with Catherine. And this is just not possible. He wants a merger of souls, an ultimate merger.

SIMON: Does it suggest that as much as we learn from growing up we unlearn some other things?

Prof. MENDELSON: You lost fantasies, I think. You unlearn ways of thinking. I've always been stuck by the use of the word disillusionment to mean a bad thing, where disillusionment seems to me to be a very good thing. I mean you give up some illusory quality in the world, and Emily Bronte wasn't willing to be disillusioned about childhood. She insisted that Heathcliff and Catherine really had it right, and that everybody else has it wrong.

SIMON: Do you find students sometimes look for what amounts to a treasure map to meaning?

Prof. MENDELSON: Yes. This is a tricky thing. The question that always comes up is, what's the message? When someone says, well, the book gives - it gives me hope. And I say, are you such a pushover that you can get hope because you read a novel? Or lose it? Don't you have any views of your own? The book doesn't tell you how to live. The book simply says here's the way things are. You may or may not agree with it, but don't say I didn't warn you, in effect. And occasionally a student will get upset because they think a book is really prescriptive, who says, isn't this really judgmental? And I - well, no, it's just saying how people act.

SIMON: But Between the Acts is the book with which you end your analysis. You say this is a book about the future. By that you mean how in a sense you close out and summarize life.

And it's written in the early days of World War II about - and it's set a few months before the war begins. And there's the sense of the air raids coming up. But what's unsettling about it to me, and I think truthful, is that it has this almost not caring sense of, well, this is what's going to happen, I'm not going to be here. It's not indifferent in the sense of cynical; it's just, these are the disasters that's going to happen, there isn't very much I can do about it.

SIMON: It's irresistible to note biographically that Virginia Woolf finished this - was it a month before she took her life?

Prof. MENDELSON: Just about that. Yeah, she was revising it and then she put the rocks in her pocket and walked into the River Ouse. So it clearly was a tremendous level of despair, but I think it's worth keeping in mind that the author is somehow different - the author of a novel is different from the person who sat down to write the book.

SIMON: Can I get you to go with that thought, that novelists are not necessarily their novels? Because on the one hand we think of it as the most personal form.

Prof. MENDELSON: Well it - the novelist - I think this is the case in any artist. I know about a friend who picked up a book that he had written and said, what really puzzles me about this book is that I'm not smart enough to have written it.

And there's a way in which a writer - when you sit down to make a work of art seems to me to be cooperating with hundreds, thousands of other writers, to have the support of the shape of a novel, to have the help of the English language itself or whatever language you're writing in, with it's rhymes and it's puns and it's echoes and it's allusions, that when you sit down to write this book, you're not alone. You have all of your reading, all of the language, all of the things that you've forgotten but that got into your head working with you, helping to shape the way you think about that world.

And that - that's going to be something more profound, I suspect, much of the time, not always, than the way in which you sit down to the breakfast table.

SIMON: It's irresistible also to quote you. You have a paragraph by Virginia Woolf in here. She writes, There crouched in the grass, curled in an olive green ring, was a snake. Dead? No. Choked with toad in it's mouth. The snake was unable to swallow. The toad was unable to die. A spasm made the ribs contract. Blood oozed. It was birth the wrong way around. A monstrous inversion.

SIMON: Oh my gosh. And I must say, you're not surprised that the author of that paragraph put stones in her pockets and walked into a river.

Prof. MENDELSON: That's right. But you couldn't write that paragraph if you knew that there was such a thing as birth the right way around.

Prof. MENDELSON: That is my son.

SIMON: So this book is not only for him; the message of this analysis is these books are about him too.

Prof. MENDELSON: Well, I think if you're - these books are about anyone who's willing to read and sympathize and get into somebody else's head. I think any great book works this way. In other words, he's - he's the person to whom I - on whom I focus most, shall we say, of - and whose - the shape of whose life matters to me most. And in part it's a book about reminding me to let him become himself.

SIMON: Professor, it's been a pleasure talking to you. Thank you very much.

SIMON: Edward Mendelson, who is a professor of English literature and comparative literature at Columbia. His new book is The Things That Matter: What Seven Classic Novels Have to Say About the Stages of Life.

Mendelson: 'The Word and the Web' 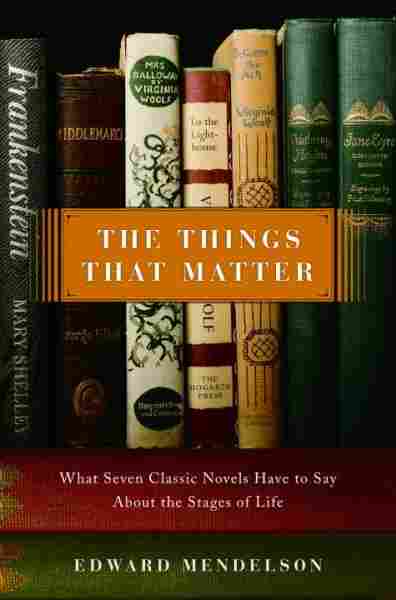 The Things That Matter