Accessibility links
Iraqi Shiite Women Share Sorrow, Joy at Arbaeen Shiite Muslims across the Middle East and Asia are marking the "Arbaeen" — the end of the annual mourning period for the death of Imam Hussein, the revered Shiite saint. While millions make the pilgrimage to Karbala, Iraq, a group of women in Baghdad gather for a smaller ceremony. 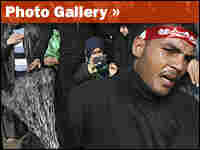 See the Shiite pilgrimage to Karbala, Iraq, for Arbaeen. 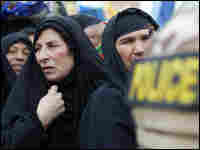 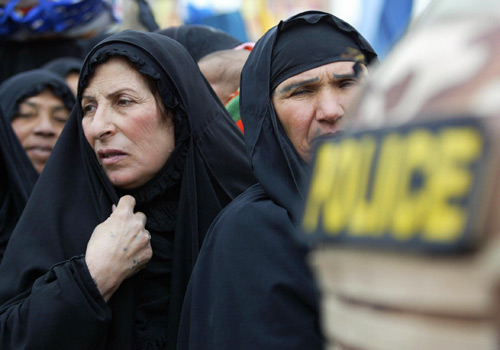 Iraqi soldiers search Shiite pilgrims gathering in Karbala for the religious ceremony of Arbaeen on Monday.

Shiite Muslims across the Middle East and Asia are marking the "Arbaeen" — the end of the annual mourning period for the death of Imam Hussein, the revered Shiite saint.

Millions of Shiites are making the pilgrimage to the southern Iraqi city of Karbala, where Imam Hussein was buried after he was slain in a seventh century battle. More than 60 people have been killed so far this year in attacks on the pilgrims by Sunni militants. In addition to the ceremonies in Karbala, small groups of Shiites observe the ritual in other parts of Iraq.

In Baghdad, a group of Iraqi women gather for the occasion in a small living room that is dark and pungent with sweat. Dozens of women draped in black ritually beat their chests as they chant.

In the center of the room, the true devotees sway and jump in a frenzy. Tears wet many faces.

In the corner, Umm Mohammed leads the prayers, her voice reverberating through a loudspeaker. The chanting goes on for at least an hour.

Afterwards, the women are given refreshments and have time to talk.

While they are gathered for love of Imam Hussein, Umm Mohammed says, the women's ceremony also commemorates the roles of the imam's mother, Zainab, and his sister, Zahra.

"It is in the memory of holy Imam Hussein and the ordeal of his holy mother and sister that we do this," she says. "Women wish to be here to receive a blessing ... to ask for mercy and for help."

"During Saddam's time, we were doing this secretly. Ba'ath Party members were tracking us all the time," she says. "Later, after Saddam, we became afraid of terrorism."

Since the U.S. invasion, amid sectarian violence and the tenuous security situation, few women have wanted to gather together in large numbers for an obviously Shiite commemoration.

There is a kind of mystical element to the ritual. Women go up and tie a knot in Umm Mohammed's robe to make a wish. She is considered by some to be holy because of a vision that led her to her role as a "mullayeh," a female mullah.

"For three years, in my dreams I saw the mother and sister of Imam Hussein," she says. "They told me in the dream that I had to take part in condolence ceremony for Imam Hussein. My voice is beautiful but I was too shy at first to do the chants."

For some of the women, this funeral ceremony has a deeply personal meaning.

Twenty-four-year-old Noor's husband has been missing for a year and a half. He was kidnapped near the Syrian border. She is sure he is dead, but it doesn't stop her from asking a fortune teller at the ceremony whether she will find him again.

During the chanting, she was sobbing.

She says she beats her chest and chants to find release from her pain. But it hasn't helped.

"On the contrary, my pain increases. I feel my heart will break; I remember him. Sometimes I want to keep away from all the memories, so I lock myself in a room. But after this session, his memory is brought back to life and ... it hurts me," she says.

The women around her nod in sympathy. Nearby, one bares her chest to breast-feed her newborn.

The Arbaeen ceremonies in Karbala are mainly male affairs, where the faithful beat themselves with chains and cut themselves with razors, knives and swords. No men are allowed in the house while this ritual is taking place, and so, briefly, these women feel safe to share both their joys and their sorrows.