What Makes the 2006 Elections Different?

What Makes the 2006 Elections Different? 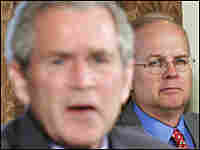 White House adviser Karl Rove (right) watches while President Bush takes questions from the media at the end of a meeting with congressional members July 18, 2006, at the Cabinet Room of the White House in Washington, DC. Alex Wong/Getty Images hide caption

We used to call Labor Day the start of the election campaign season. But all of our sporting seasons are longer now. Pro football starts in August, the professional basketball season lasts nine months and the professional political season goes on pretty much all the time.

Still, Labor Day remains the time when professional observers of politics make their best guess at how things will go in November. And this year, with heightened interest in the congressional midterm contests, prognosticators of all kinds are crowding to the fore with predictions.

A clear consensus has appeared among those who do this for a living, and it is that the Democrats are in surprisingly good shape at the moment. If the election were this week, the Democrats ought to take over the House for the first time in a dozen years.

There are 435 contests to analyze here, but the essential facts are these: About 40 Republican seats -- roughly one in six -- look vulnerable at this moment. Perhaps 10 Democratic seats are vulnerable, or roughly one in 20.

If Democrats capture even half of the vulnerable Republican seats, and give back no more than half of their own, they would achieve the 15-seat net gain they need to become the majority. At the moment, they seem on track to do this well and perhaps a little better. The Democrats' minority status is less likely to change in the Senate, where the consensus sees them gaining three seats (or more) but not the net of six they need.

Of course, this consensus comes with a caveat. The cautious look back on the last three election cycles, when Democratic hopes buoyed in September were dashed on Election Day. In each of these campaigns, the strategy engineered by presidential strategist Karl Rove and his allies has refocused the electorate on issues favorable to Republicans and on the failings and foibles of the opposition. In each case, the GOP's timing has been exquisite, making the opposition look as if it had peaked too soon.

This year's skeptics, including quite a few of the Democrats themselves, suspect the out-party will succumb once again to a barrage of autumn advertising, superior Republican turnout and perhaps an orchestration of events that strengthens the president's hand. Will it be a flurry of terrorism arrests? A show of progress in Iraq? A dramatic drop in the price of gasoline?

Rove & Company have proved they know how to turn an election dynamic around and how to win the close ones. Right now, their winning streak is unbroken. But there are a few factors this fall that may make the outcome different.

First, for the first time in the elections of this decade, the Republican campaign machinery does not have a clear target to attack. In 2000, they had the excesses of President Bill Clinton in the White House, plus Al Gore, with all his faults (real and imagined), to run against.

In a real sense, the Republicans of 2000 could run as the party of dissatisfaction and change. For all that, the elections of that November produced a popular vote victory for Gore (by half a million votes), and gains for the Democrats in the Senate (which tied at 50-50) and House.

In 2002, the Republicans ran against the Senate, which had tipped to a single-vote Democratic majority in 2001. The GOP played on post-9/11 sentiment to flail those who opposed President Bush on the details of the Department of Homeland Security. Democrats who questioned the administration were portrayed as sympathizing with Osama bin Laden.

In 2004, the big targets were two Democratic senators: John Kerry, the Democratic presidential nominee, and Tom Daschle, the Senate minority leader. Again, the essential issue was national strength in the face of international terrorism. The issue was closely contested, but both Kerry and Daschle lost in close races that were still counting ballots in the wee hours (and for days thereafter).

In each of these cycles, the Republican campaign had a target to attack at least as large and vulnerable as George W. Bush himself. That was key to fundraising, to media message and to turnout on Election Day.

The other big turnout advantage Rove & Company relied on, especially in 2002 and 2004, was the militant mood within their own ranks. In these years, core conservatives were solid, motivated and upbeat. Yes, Iraq was somewhat divisive in 2004, but not nearly to the degree it is within the GOP today. Add to that the party's current division and frustration over stem cells, high government spending and the stalling of momentum on social issues such as abortion, school prayer and gay marriage.

Does the Republican base have the same sense of being on the march today that it had in 2002 and 2004?

Finally, consider the volatile effect of immigration. Stopping illegal immigration is the single best hot-button issue the Republicans have this year, and also their biggest source of public disagreement. No one now expects this Republican Congress to act on immigration in the two months before Election Day. The majority is at odds with itself. The House is in full revolt against the Senate bill, and both chambers are on the outs with the White House.

This breakdown over immigration will not make Republican voters into Democratic voters. But it does contribute to the overall sense that this Republican Congress has reached the end of its skein. It recalls the Democrats' disarray over their health-care bill in the summer and fall of 1994, a symbolic failure that presaged their loss of control in both House and Senate that November.

So the task for Rove & Company this fall is different. Yes, they will try to refocus the news on national security in ways that help their candidates. Surely, they will go after the Democrats as the party of defeat and cut-and-run. But they must also find new targets among the Democrats -- targets large enough to substitute for those of past years. And they must find new ways to rekindle the fires that brought their own conservative core voters to the polls in winning numbers.