Bruce Hoffman, a terror expert and professor of security studies at Georgetown University, talks withe Renee Montagne about the release of an updated White House document titled the National Strategy for Combating Terrorism.

The Bush administration says it has degraded the al-Qaida terror network, but that terrorists have adjusted their tactics in response and continue to threaten the United States. That's according to a new strategy document released by the White House. President Bush spoke yesterday about U.S. counterterrorism efforts. It was the latest in a series of speeches leading up to the fifth anniversary of the September 11th attacks.

President GEORGE W. BUSH: During the last five years, we've learned about this enemy. We've learned that they're cunning and sophisticated. We've witnessed their ability to change their methods and their tactics with deadly speed even as their murderous obsessions remain unchanging.

For a closer look at the White House strategy for combating terrorism, we've called Bruce Hoffman. He's a professor of security studies at Georgetown University's School of Foreign Service, and he joins us now on line. Good morning.

MONTAGNE: This is a new document. Is it in fact a new strategy?

Prof. HOFFMAN: It is a new strategy. I think it's a more sophisticated and certainly more mature document than it's predecessor from three years ago. It is very forthright in recognizing that defeating terrorism is as much a battle of ideas as it is of arms, whereas I would say its predecessor from February 2003 put more on an emphasis on military approaches. And I think this document also lays out a series of both long-term and short-term approaches, looking at the struggle very much as one that will involve a synchronization of both tactics and a longer term strategy.

MONTAGNE: And is the Bush administration's assessment of how terrorism has evolved correct in you view, and is it defining the problem correctly?

Prof. HOFFMAN: Well, it's not incorrect, but I think it puts more of an emphasis on the fact which is true, how this enemy or adversary has evolved and changed and put stress on the fact that it's a more dispersed and less centralized movement. Which is true, but I think the problem is al-Qaida has never been an either/or type of organization.

It is to an extent more decentralized, but at the same time I believe as the plot last month to down U.S. airliners in mid-flight over the Atlantic proves, certainly is the 7/7/05 London bombings show, and a variety of plots in recent years demonstrate, there still is an al-Qaida central and it still is actively involved in planning and plotting terrorist operations, so it hasn't gone away.

MONTAGNE: Right. And given sort of expanded definition of the threat, if you will, is this new administration strategy tailored to that threat? And while -in answering that question, did anything strike you as new are interesting as a tactic in this fight?

Prof. HOFFMAN: Well, I think it is tailored to the threat. I thought, though, that it just de-emphasized the role of an al-Qaida central. And there was an inherent contradiction between the strategy and then President Bush's speech yesterday. The strategy more or less ignores al-Qaida central or al-Qaida headquarters and views the threat as this decentralized, diffuse challenge. Whereas President Bush seems to be hitting the nail squarely on the head by citing bin Laden front and center as not just the ideological leader of this movement but also as a key figure, and the strategy seems to diminish his importance.

MONTAGNE: What else, if anything, is missing from the strategy?

Prof. HOFFMAN: Well, I think the strategy very, very commendably talks about the dynamic nature of terrorism and argues that terrorism has changed and therefore our strategy has to, which is quite right.

It also I think is remarkably candid. It talks at length about the challenges of ending the sanctuary that terrorists can receive from states and the support that they obtain from states. And then goes on to - as I said very frankly -discuss how Iran and Syria have reemerged as problems after having been quiescent or after having being in serious case remarkably cooperative during the first phases on the war on terrorism.

So it's not really sugar coating the problem. I think it's right when it argues that the influence of U.S. policy on Middle Eastern developments - for instance, on Iraq as being a cause of terrorism or the Palestinian-Israeli conflict as a cause of terrorism - is right. But at he same time, though, it ignores the fact that whether or not those two conflicts are causes of (unintelligible) terrorism, they've emerged as enormously important rallying cries. And at least in terms of perception, they've been a highly corrosive element in the war on terrorism.

MONTAGNE: Thank you very much for joining us.

MONTAGNE: Bruce Hoffman is professor of security studies at Georgetown University School of Foreign Service. You can read details of the president's National Strategy For Combating Terrorism at npr.org. 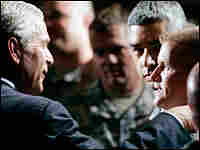 President Bush greets members of the U.S. military after speaking to the Military Officers Association of America, Sept. 5, 2006, in Washington D.C. The president spoke about the war on terrorism and the situation in Iraq. Mark Wilson/Getty Images hide caption 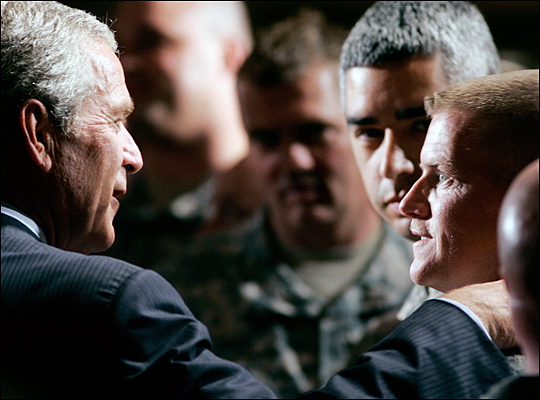 President Bush greets members of the U.S. military after speaking to the Military Officers Association of America, Sept. 5, 2006, in Washington D.C. The president spoke about the war on terrorism and the situation in Iraq.

In the second of a series of planned speeches on the need to confront the threat posed by terrorism, President Bush on Tuesday described the war in Iraq in terms of the military struggles of Europe in the 20th century.

Speaking in Washington, D.C., the president said there had been progress in making the country safer in the five years since the attacks of Sept. 11, 2001. He also said that, even though U.S. actions have weakened al-Qaida since the Sept. 11 attacks, Americans must take seriously the words of the enemy.

Also Tuesday, the White House released a document titled the National Strategy for Fighting Terrorism, which says that America is safer than it was five years ago, but that significant threats remain.

In response to the president and the White House report, Democrats accused the president of failing the national security test. At a news conference at the Capitol, retired Gen. Wesley Clark said that the Iraq War has actually put America more at risk.

"Invading Iraq was an unnecessary war," Clark said. "It distracted us from what we were trying to accomplish in Afghanistan, and it's been counterproductive in winning the war on terror."

The White House dismissed suggestions that it is politicizing the Sept. 11 terrorist attacks as part of the fall congressional campaign. Press secretary Tony Snow says that terrorism is what Americans are talking about and that the president is simply presenting his case to the public.