Accessibility links
Hamdan Lawyer Reacts to Bush Tribunal Proposal Georgetown law professor Neal Katyal successfully argued the case of Salim Ahmed Hamdan before the Supreme Court, leading to a ruling that the use of military tribunals for Guantanamo detainees stood in violation of U.S. and international law. Katyal offers his reaction to President Bush's legislative proposal to address the issue.

Georgetown law professor Neal Katyal successfully argued the case of Salim Ahmed Hamdan before the Supreme Court, leading to a ruling that the use of military tribunals for Guantanamo detainees stood in violation of U.S. and international law. Katyal offers his reaction to President Bush's legislative proposal to address the issue.

Neal Katyal is a professor at Georgetown Law School. He successfully argued the case of Salim Ahmed Hamdan before the Supreme Court. That's the case that invalidated the Bush administration's system of military tribunals. He says that even if Congress passes the bill the president wants, that will not survive court challenged.

NEAL KATYAL: What the president unveiled today was a really radical move designed to resurrect a system of martial law, indeed something that literally America's never seen. And it bears no resemblance to a court martial or an American trial or even a trial for Rwandan justice, for that matter. So I expect it to be invariably challenged.

SIEGEL: But if the president gets a bill out of Congress that says you can proceed, what happens next? Do you then bring a challenge on behalf of Salim Ahmed Hamdan and go to court challenging that law?

KATYAL: Well, I would expect a whole variety of challenges to be made by detainees who are facing these trials. If the president's bill is enacted into law it will enact, for example, the right to get - you get kicked out of your own criminal trial. It gives the prosecution the ability to do that. That's something that no American court, military or civilian, has permitted in 200 years. And I think it's a quite dramatic departure from our nation's traditions. And so I do expect an inevitable challenge and years of litigation to follow.

SIEGEL: The president says that the Supreme Court cited Common Article III of the Geneva Conventions, which is too vague, he said. That Congress should spell out what it is that is an affront to dignity or a violation of the kind of processes alluded to in that article. What's your understanding of what the article precludes in the way of a trial?

KATYAL: Common Article III has been described as the Geneva Conventions in miniature. It's kind of the most rudimentary protections of the laws of war. They are protections that the United States Senate ratified in 1955 by a super majority, and they have bound our nation for over 50 years.

The idea that these minimal, rudimentary protections are too vague is simply politics. It's not grounded in any rational fear, as the nation's military leaders have all said. The Judges Advocates General, who said, we train our troops to Common Article III. We're not worried about complying with Common Article III.

SIEGEL: Well is, for example, aggressive but not physically coercive questioning, perhaps even with some threat implied by questions, is that illegal under Common Article III?

KATYAL: I don't know of anyone, even the most liberal scholar of international law, who thinks that aggressive questioning by itself violates Common Article III. Of course not. And the proof is in the pudding. We've had these conventions on the books for 51 years and never have we had the kind of outlandish, fanciful legal interpretations that the administration is now offering.

And this is, I think, a very crucial point because whatever the president - whatever bill is passed by Congress, if any, Americans have to remember that how we treat our prisoners from other countries is how our troops are going to be treated when they're captured by other countries. And do Americans really want their sons or daughter tried under these kinds of circumstances and these types of elimination of the most foundational Geneva Convention protections?

SIEGEL: Of course, part of the argument for the administration here is that the enemy in the conflict that they're speaking of would just as soon decapitate somebody on the Internet as accord him some protections under the Geneva Conventions.

KATYAL: Of course. And the whole premise of the Geneva Conventions is not to protect you just against the enemy you face de jour but all enemies, present and future. And if America breaks from its longstanding tradition of being one of the leaders in the laws of war and protection of international humanitarian law the consequences, I think, are going to be quite grave. And that's why, after all, the Senate ratified the Geneva Conventions and indeed why every nation on earth now has ratified those conventions.

SIEGEL: I'm confused though as to in what way the president is being anything less than respectful of the Supreme Court here. He says, they threw out the system that I had proposed. The Supreme Court therefore has ruled that out. So I'm going to Congress to get a law to set up something else. Isn't that exactly what the Supreme Court told him to do?

KATYAL: The Supreme Court certainly said, and I think all reasonable scholars agree, that the Congress can enact a military commission bill with fair procedures that will survive court review. The president's bill today is not that bill.

SIEGEL: Professor Katyal, thank you very much for talking with us. 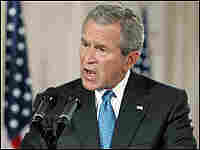 President Bush addresses a key issue -- how to deal with terrorism suspects -- during a speech from the East Room of the White House. Mark Wilson/Getty Images hide caption 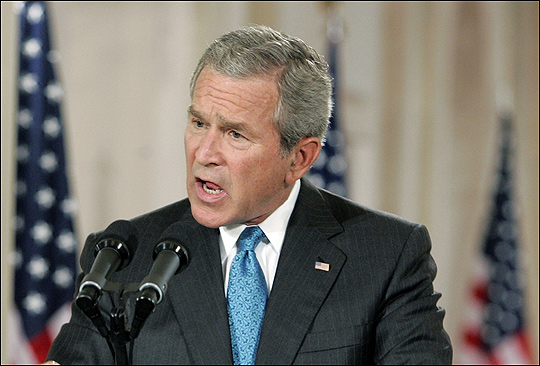 President Bush addresses a key issue -- how to deal with terrorism suspects -- during a speech from the East Room of the White House.

Guantanamo by the Numbers

Since 2002, the United States military base at Guantanamo Bay, Cuba, has been holding prisoners from the invasion of Afghanistan and the war on terrorism.

There are 459 prisoners remaining at Guantanamo; 315 have either been transferred to the custody of their home governments or released.

Most detainees — held for more than four years, most held without charge — are from Saudi Arabia, Yemen and Afghanistan.

Ten have been charged, but their trials are on hold while Congress decides what rules they should be tried under.

An additional 120 detainees have been determined either not to be enemy combatants or to no longer be threats to the United States and its allies. However, they are still being held at Guantanamo because the United States fears they may be persecuted upon their return home; the United States can't get guarantee that they won't be released once they're returned home; or their home governments don't want them.

The U.S. military is also expanding an existing prison in Afghanistan, called Pol-e-charki. When it is completed in early 2007, scores of Afghan prisoners at Guantanamo will be moved there. 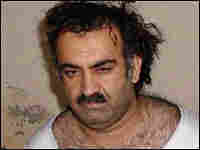 This image of Khalid Shaikh Mohammed, the alleged mastermind of the Sept. 11 attacks, was released shortly after his capture in March 2003. President Bush announced that Mohammed is among 14 high-profile terrorism suspects transferred to Guantanamo for trial. U.S. Defense Department hide caption

WASHINGTON (AP) -- Pressing ahead in the face of an adverse Supreme Court ruling, President Bush is urging Congress to put in place a plan that will permit military tribunals to hear the cases of suspected terrorists held at Guantanamo Bay prison.

Bush's original plan for the type of military trials used in the aftermath of World War II was struck down in June by the Supreme Court, which said the tribunals would violate U.S. and international law.

Aides said legislation being introduced on Bush's behalf Wednesday on Capitol Hill insists on provisions covering military tribunals that would permit evidence to be withheld from a defendant if necessary to protect classified information.

As part of the package, Bush asked Congress to shield from prosecution or lawsuits federal personnel who handle terrorism suspects.

"Time is of the essence," the president said during a wide-ranging speech from the East Room of the White House. "Passing this legislation ought to be the top priority."

Sens. John McCain and Lindsey Graham have drafted a rival proposal. It would guarantee certain legal rights to defendants, including access to all evidence used against them.

"I think it's important that we stand by 200 years of legal precedents concerning classified information because the defendant should have a right to know what evidence is being used," said McCain, R-Ariz.

Administration officials also have said that allowing coerced testimony in some cases may be necessary, while McCain said the committee bill would ban it entirely.

"We have some differences that we are in discussion about," said McCain, who had not seen the White House bill in writing. "I believe we can work this out."

Senate Majority Leader Bill Frist, R-Tenn., is expected to side with the administration. He planned to introduce Wednesday the White House legislative proposal on the floor and refer it to the Armed Services Committee for review.

Senate Democrats so far are in agreement with Warner and McCain, setting up a potential showdown on the floor this month just before members leave for midterm elections.

Also on Wednesday, the Pentagon put out a new Army field manual that spells out appropriate conduct on issues including prisoner interrogation. The manual applies to all the armed services, but not the CIA.

The United States began using the Guantanamo Bay Naval Base in eastern Cuba in January 2002 to hold people suspected of links to al-Qaida or the Taliban. About 455 detainees remain there, including 115 considered eligible for transfer or release.

The president said he eventually wants to close Guantanamo as critics and allies around the world have urged.