Accessibility links
Manual Defines Limits of Prisoner Interrogation The Department of Defense releases a long-awaited manual covering treatment of prisoners during interrogation. The Army Field Manual covers all the armed services, except the CIA.

The Department of Defense releases a long-awaited manual covering treatment of prisoners during interrogation. The Army Field Manual covers all the armed services, except the CIA.

Two major announcements today regarding suspected terrorists being held by the U.S. President Bush said that 14 prisoners have been transferred from CIA custody to the military's prison at Guantanamo Bay. In a White House speech, Mr. Bush said the group includes the alleged mastermind of the 9/11 attacks, Khalid Sheikh Mohammed.

GEORGE W: It has been necessary to move these individuals to an environment where they can be held secretly, questioned by experts and when appropriate, prosecuted for terrorist acts.

NORRIS: The other announcement today came at the Pentagon. News that al-Qaida prisoners will now be subject to new detention rules. The Defense Department formally released a much-delayed new manual on how all detainees in military custody will be treated.

JOHN HENDREN: For years senior Bush administration officials have argued that because of a loophole in international law, there are few restrictions on how the U.S. military questions so-called enemy combatants. This was Defense Secretary Donald Rumsfeld last November:

DONALD RUMSFELD: The kind of people held at Guantanamo include terrorist trainers, bomb makers, extremist recruiters and financiers, bodyguards of Osama bin Laden and would-be suicide bombers. They are not common car thieves.

HENDREN: The changes today in interrogation techniques in the army field manual mark a significant reversal. All detainees will be questioned under the rules outlined by the Geneva Conventions. And Cully Stimson, deputy assistant secretary of defense, says the list eliminates several secret interrogation tactics.

CULLY STIMSON: For the first time in DOD history, here we are establishing for all detainees regardless of their legal status a baseline standard of care and treatment.

HENDREN: The changes were largely completed last fall and were expected this spring, but they were delayed by debate over an anti-torture provision that was approved by Congress despite White House efforts to derail it and by the Supreme Court case of Hamdan v. Rumsfeld, which found that enemy combatants were entitled to the protections of international law. And by a debate over whether to include a classified section with additional secret techniques. In the end, says Army Lieutenant General Jeff Kimmons, there was no secret section.

JEFF KIMMONS: The new field manual incorporates a single standard for humane treatment for all detainees regardless of their status under all circumstances and there are no others.

HENDREN: The manual adds three new interrogation techniques - a good-cop/bad-cop routine, a false flag scenario that makes prisoners think they're not under American control and it also approves one technique the Geneva Accords prohibit for prisoners of war, isolation from other prisoners.

HENDREN: Senior Defense officials say the prohibitions include techniques that Rumsfeld has specifically approved. Officials say Khalid Sheikh Mohammed, widely considered the mastermind behind the 9/11 attacks, was subjected to waterboarding, a kind of simulated drowning. Kimmons says the practices aren't necessary and they don't work.

KIMMONS: No good intelligence is going to come from abusive practices. I think history tells us that and moreover, any piece of intelligence which is obtained under duress, through the use of abusive techniques, would be of questionable credibility.

HENDREN: The Army's field manual is important because under a new law, the Detainee Treatment Act of 2005, it is the guiding document for all military interrogations. But there are some major loopholes under the new rules.

First, they apply only to interrogations in Defense Department facilities across the globe. President Bush announced today that Khalid Sheikh Mohammed and 13 other prisoners held in secret CIA prisons have be transferred to prisons run by the Pentagon at Guantanamo or elsewhere. But nothing in the new rules stops the administration from sending them or other prisoners back. The manual is also updated annually, so the Pentagon could alter the rules in the future with the stroke of a pen. 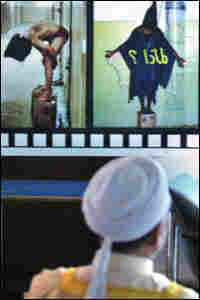 An Iraqi man looks at posters in May 2005 showing Iraqi prisoners held in the notorious U.S.-run Abu Ghraib prison in Baghdad. A new U.S. military manual bans the use of torture techniques such as hooding and forced nakedness. Karin Sahib/AFP/Getty Images hide caption 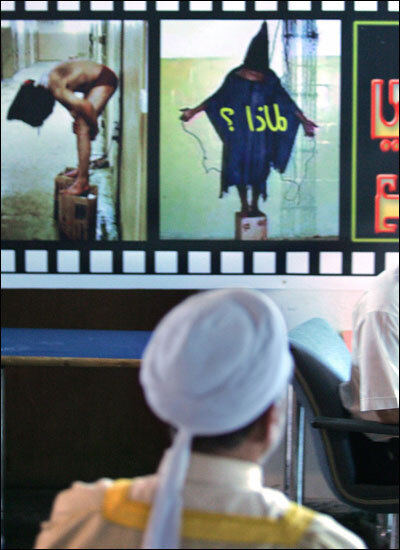 An Iraqi man looks at posters in May 2005 showing Iraqi prisoners held in the notorious U.S.-run Abu Ghraib prison in Baghdad. A new U.S. military manual bans the use of torture techniques such as hooding and forced nakedness.

WASHINGTON (AP) -- A new Army manual bans torture and degrading treatment of prisoners, for the first time specifically mentioning forced nakedness, hooding and other procedures that have become infamous during the five-year-old war on terrorism.

Delayed more than a year amid criticism of the Defense Department's treatment of prisoners, the new Army Field Manual was being released Wednesday, revising one from 1992.

It also explicitly bans beating prisoners, sexually humiliating them, threatening them with dogs, depriving them of food or water, performing mock executions, shocking them with electricity, burning them, causing other pain and a technique called "water boarding" that simulates drowning, said Lt. Gen. John Kimmons, Army Deputy Chief of Staff for Intelligence.

Officials said the revisions are based on lessons learned since the United States began taking prisoners in the war on terrorism after the Sept. 11, 2001, attacks.

Release of the manual came amid a flurry of announcements about U.S. handling of prisoners, which has drawn criticism from Bush administration critics as well as domestic and international allies.

The Pentagon also announced an overall policy statement on prisoner operations. And President Bush acknowledged the existence of previously secret CIA prisons around the world where terrorism suspects have been held and interrogated, saying 14 such al-Qaida leaders had been transferred to the military prison at Guantanamo Bay and will be brought to trial.

Human-rights groups and some nations have urged the Bush administration to close the prison at the U.S. naval base in Guantanamo Bay, Cuba, since not long after it opened in 2002 with prisoners from the campaign against al-Qaida in Afghanistan. Scrutiny of U.S. treatment of prisoners shot to a new level in 2004 with the release of photos showing U.S. troops beating, intimidating and sexually abusing prisoners at Abu Ghraib in Iraq -- and then again with news of the secret facilities.

Though defense officials earlier this year debated writing a classified section of the manual to keep some interrogation procedures a secret from potential enemies, Kimmons said Wednesday that there is no secret section.

Defense Secretary Donald H. Rumsfeld has said from the start of the counter-terror war that prisoners are treated humanely and in a manner "consistent with Geneva Conventions."

But Bush decided shortly after the Sept. 11 attacks that since it was not a conventional war, "unlawful enemy combatants" captured in the fight against al-Qaida would not be considered POWs and thus would not be afforded the protections of the convention.

The new manual, called "Human Intelligence Collector Operations," applies to all the armed services. It doesn't cover the CIA, which also has come under investigation for mistreatment of prisoners in Iraq and Afghanistan and for keeping suspects in secret prisons.

Sixteen of the manual's 19 interrogation techniques were covered in the old manual and three new ones were added on the basis of lessons from the counter-terror war, Kimmons said.

The additions are that interrogators may use the good-cop/bad-cop tact with prisoners, they may portray themselves as someone other than an American interrogator, and they may use "separation," basically keeping prisoners apart from one another so enemy combatants can't coordinate their answers.

The last will be used only on unlawful combatants, not POWS, only as an exception and only with permission of a high-level commander, Kimmons said.

Also Wednesday, the Pentagon released a new policy directive on detention operations that says the handling of prisoners must -- at a minimum -- abide by the standards of the Geneva Conventions and lays out the responsibilities of senior civilian and military officials who oversee detention operations.

"The revisions ... took time," Deputy Assistant Secretary of Defense for Detainee Affairs Cully Stimson said at the briefing. "It took time because it was important to get it right, and we did get it right."

He said the directive pulls together policy changes recommended in a dozen investigations done after the Abu Ghraib scandal broke.

"By publishing this document and the Army Field Manual, we will have addressed over 95 percent of the recommendations from those 12 major investigations since Abu Ghraib," Stimson said.

Amnesty International USA's director, Larry Cox, said he was "pleased to see a direct repudiation of tactics previously approved for use against detainees such as hooding, the use of dogs," as well as the acknowledgment that the Geneva Conventions apply.

Among members of Congress briefed on the manual Wednesday, Democrats praised it as a step in the right direction and potentially helpful in preventing future prisoner abuse.

Republican Sen. John Cornyn of Texas said he was concerned that, because the techniques are unclassified, information from the manuals could be used by terrorists to resist interrogations.