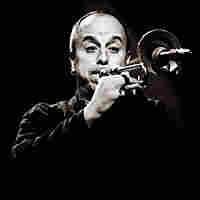 Song of the Day: 'Darling Nikki'

Trumpeter Steven Bernstein has formed eclectic groups with names that sound like rock bands — Spanish Fly and Sex Mob — in order to bring new audiences to the world of jazz.

The name of his latest group, the Millennial Territory Orchestra — or MTO — sounds futuristic, but its music is actually a combination of both old and new. The band, which just released its first album, MTO Volume One, combines the sounds of violin and banjo alongside trombone and slide trumpet. Bernstein mixes well-known pop songs with a lost style of jazz that predates the big band era.

The band is known for energetic on-the-spot arrangements of songs by Count Basie and Stevie Wonder, and even by the artist formerly known as The Artist Formerly Known as Prince.

"It's this kind of bizarre combination of this old, old sound but also this very modern way of playing music," Bernstein says. "I described the band to a friend of mine and he said, 'Oh, the Little Rascals Band.' So you know people do have a historical antecedent to this."

But the MTO is more than just nostalgic recreation. One secret to the band's appeal is the jolt of familiarity that suddenly brings its listeners into the modern era. Bernstein arranges songs such as the Beatles' "Cry Baby Cry" to simultaneously sound updated and retro. It's his magic at mixing the strange and the familiar, the past and the present, that makes a ride with the MTO so surprising — and enjoyable.