Accessibility links
From Businessman to Community Activist For a Pakistani businessman in a Brooklyn neighborhood, the attacks of Sept. 11 changed his career. Mohammed Razvi was part of a small family business empire when he decided to give it all up and become a community activist.

Listen
From Businessman to Community Activist 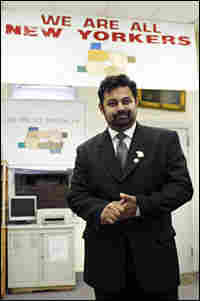 Mohammed Razvi, pictured inside the Council of People's Organization, the community rights non-profit he founded after Sept. 11. The center offers legal advice and other assistance to people in the Brooklyn neighborhood known as Little Pakistan. Scott Gordon for NPR hide caption

Mohammad Razvi was once a successful business man running a small empire of family-owned stores in the Brooklyn neighborhood known as Little Pakistan. But after the attacks of Sept. 11, he left all that behind to become a community activist.

Razvi is the oldest of five boys. His father was one of the first Pakistanis to come to the neighborhood.

"Now, you see, there's a mosque at the end of the corner," Razvi says. "You'll see a liquor store that just opened up. It used to be a Pakistani barbershop. That would have never happened if the community was still strong."

Razvi says that after Sept. 11, FBI agents and immigration officials descended on his community, scaring many residents away and causing upheaval in the neighborhood.

Families in need turned to business owners, which prompted Razvi to offer an empty storefront he had leased as a central place where the community could come for help. The change was supposed to be temporary.

For two years, he ran the makeshift community center while managing the family businesses, until the juggling became impossible. So he made the decision to become a full-time advocate.

"I didn't expect this," Razvi says. "This I just fell into."

He adds, "I don't know where it's going to lead me towards, but I like it."

Advocating on behalf of the community required building a relationship with the FBI and immigration officials. Now the 36-year-old advises both agencies on how to be culturally sensitive. He also went through an FBI citizens' academy, where he says he built contacts that can help when there's a crisis in the community. His contacts, he says, have helped him locate many a Muslim man picked up by federal authorities. That, Razvi says, is what keeps him going.

Today, Razvi's full-time non-profit is called the Council of People's Organization, or COPO for short. But the businessman in Mohammad Razvi is far from gone. He believes firmly in fiscal discipline and criticizes other non-profits that try to do too much with too few resources.

His life has changed dramatically: His paycheck is about half the size it used to be, and he can no longer afford private school for two of his five children. But Razvi says there are no regrets.